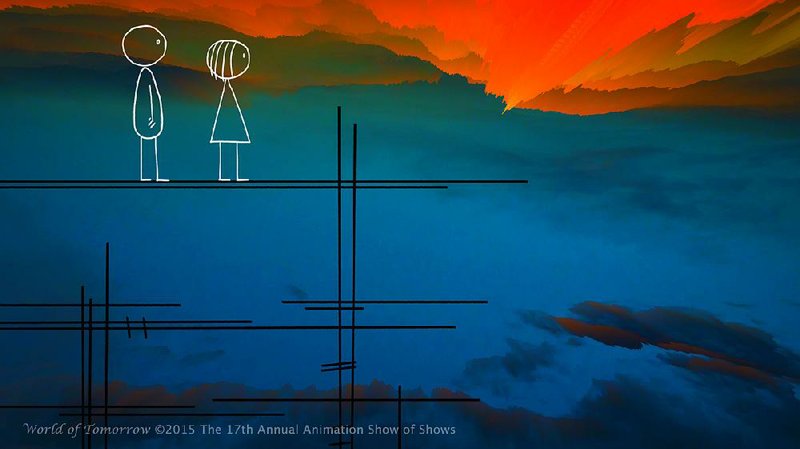 A highlight of the 17th annual Animated Show of Shows is World of Tomorrow.

I remember sitting in a ratty theater in Tempe, Ariz., in 1992. That's where I first saw Mike Judge's characters Beavis & Butt-Head as part of Spike and Mike's Sick and Twisted Festival of Animation. For some reason, "Frog Baseball" had a pretty big effect on me. It wasn't exactly like seeing Hiroshima, Mon Amour when I was in college, but it definitely alerted me to possibilities I hadn't previously considered.

As far as I can tell, the various Spike and Mike festivals (they had a few that toured the country under various rubrics) now exist only as DVD collections. But since 1998, the nonprofit Animated Show of Shows has been curating a collection of the year's best animated shorts from the world's most renowned animation festivals. Up until now these shorts have been presented on DVD -- they're for sale at animationshowofshows.com -- and occasionally screened for filmmakers and animators; this year a feature-length compilation is showing in select theaters across the country. And that 96-minute compilation is coming to Little Rock's Ron Robinson Theater July 28-30. (Tickets are $5 and the screenings begin at 7 p.m.)

It's a fantastic experience curated by Ron Diamond, the founder of Los Angeles-based Acme Filmworks and a longtime champion of animation who in the 1980s was involved with the International Tournee of Animation and the Animation Celebration festivals and subsequent anthologies.

A highlight is World of Tomorrow, a dazzling 17-minute meditation on the possibilities of life that is by turns heartbreaking, funny, surreal and deeply affecting. It's like a really good Terrence Malick film boiled down and played out with stick figures, and it announces its creator -- Austin, Texas-based artist Don Hertzfeldt -- as a major cinematic artist. While it probably does the film no favors to say much about its plot, it's about a 4-year-old girl who receives a visit from a familiar stranger from 225 years in the future. And it's lovely.

It won the Grand Jury Prize for a short film at this year's Sundance, then won both the Grand Jury and Competition Awards for an animated short at South by Southwest in Austin. It was nominated for an Oscar and has won more than 40 awards worldwide. If you're familiar with Hertzfeldt's past works -- which include a bizarre "couch gag" he did for The Simpsons and It's a Beautiful Day (a 62-minute feature he made by stitching together three of his short films, available for streaming on Netflix) -- you might not be surprised by the emotional resonance packed into this short. And if you're unfamiliar with Hertzfeldt's work, prepare to be poleaxed.

There are other outstanding pieces, including melancholy line-drawn We Can't Live Without Cosmos by Konstantin Bronzit, about two cosmonauts training in the Soviet Union. And Stripy, by Iranian brothers Babak and Behnoud Nekooei, which tells the story of a subversive factory worker determined to enliven his plant's soul-deadening production. And Behind the Trees, based on a sleepy conversation between writer Neil Gaiman and his wife, Amanda Palmer, the singer-songwriter, that takes us into the woods of the writer's subconscious. Palmer wrote and scored the delicate little movie, while illustrator Ovi Ofer animated it with colored pencils.

While some of the other shorts feel more like displays of audacious visual technique than fully realized stories, none of them drags on into tiresomeness. (That's one of the great things about anthologies like this -- you're into the next imagination quickly enough.) And the whole program is over in about the same length of time it takes to watch a vintage Billy Wilder comedy.