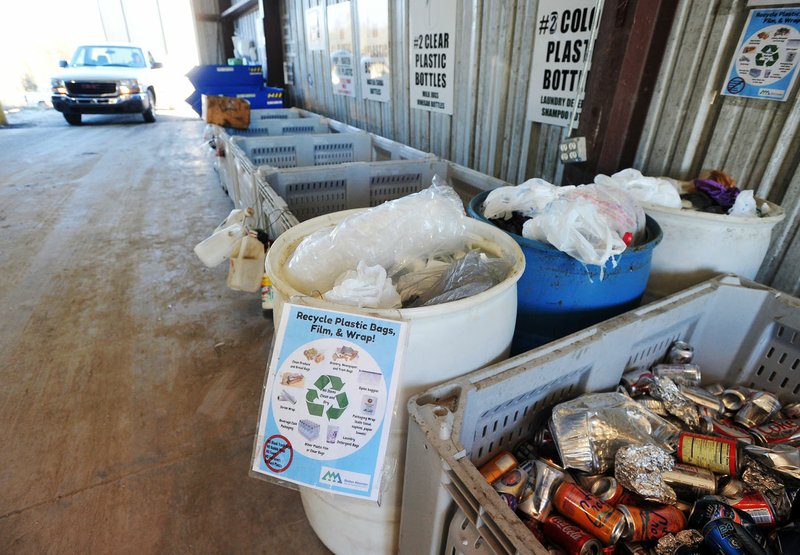 The Boston Mountain Solid Waste District has started a program to collect film plastics, keep items out of the landfill and sell the material to a company to be recycled, said Robyn Reed, director.

Plastic film, which includes plastic grocery bags, isn't degradable and poses a serious threat to wildlife when not disposed of properly, according to the district's news release.

"It's a product that is recyclable," Reed said. "It kind of fits hand-in-hand with what we do."

Through the program, residents can drop off plastic film for the district, Reed said. Those items are baled and sold to Advanced Environmental Recycling Technologies in Springdale, said Emily Deitchler, a district spokeswoman.

The company converts reclaimed plastic- and wood-fiber waste into outdoor decking and railing, fencing and door and window components.

"We recycle an enormous amount of film plastic at our facilities in Springdale and Lowell," said Al Drinkwater, the company's senior vice president for government affairs.

The company brings in its material from facilities nationwide, but Drinkwater said he wants to grow local recycling programs in Arkansas. The idea with the district's program is to increase recycling in the Northwest Arkansas area, help the environment, help the district and save money for the company by cutting transportation costs, he said.

"Not only are we helping neighbors, we are also helping to be sustainable," Drinkwater said.

The program that began Jan. 1 is expected to be long term, Deitchler said. Drinkwater said his company plans to work with the district to make the program work. The company wants it to succeed, he said.

The company asked the district to provide the service, Reed said. There was no start-up cost for the district, she said.

The company plans to buy the material by the semi-trailer load, Reed said.

How much the company will pay for the material will be decided month to month, Reed said. The price depends on the quality of the material and the market for it, Drinkwater said. The company is willing to pay more for high-quality material, he said.

Reed also said she wasn't sure how long it would take the district to collect a semi-trailer load worth of material.

"It's not a huge moneymaker," Reed said.

Residents have started dropping off items in Prairie Grove and Springdale, Deitchler said. She and Reed didn't know how many items people have brought in so far.

Reed said the items should be clean of any food.

Plastic wrap isn't accepted in any local curbside recycling programs, according to the release. Reed said it's up to waste hauling companies to decide whether to offer curbside service for the items.

The district has a goal to reduce waste and manage it, Reed said. The new program fits into those goals, she said.