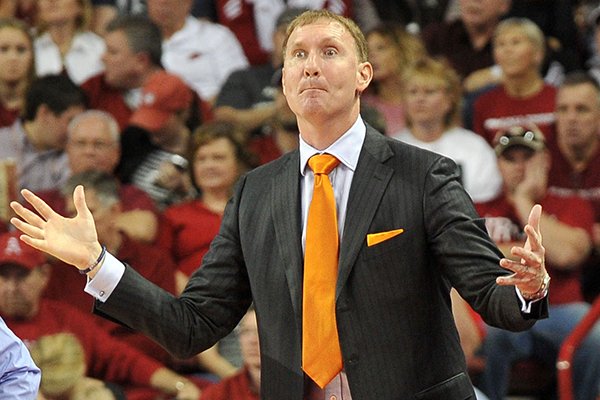 John Pelphrey, then an assistant coach at Florida, instructs players from the sideline during a game Saturday, Jan. 11, 2014, at Bud Walton Arena in Fayetteville. Pelphrey will return to Fayetteville this weekend as an analyst for the SEC Network.

Pelphrey will be the color analyst for the SEC Network's telecast of the Razorbacks' game against Mississippi State on Saturday. He will also be on the call for Arkansas' game at Missouri next Tuesday.

This weekend's game is scheduled to begin at 2:30 p.m.

Pelphrey, who coached the Razorbacks from 2007-11, is in his first season working for SEC Network. He spent the three previous seasons as an assistant coach at Florida, but was not retained when Billy Donovan left the Gators to coach the NBA's Oklahoma City Thunder earlier this year.

It is the second straight year Arkansas has had one of its former coaches serve as a color analyst for one of its games. Stan Heath, who coached the Razorbacks from 2002-07, was an analyst for ESPNU last season before becoming an assistant coach at Boston College.