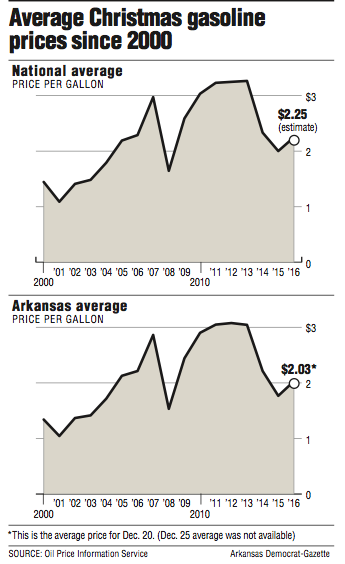 Graphs showing average Christmas gasoline prices since 2000 for Arkansas and the United States.

While prices at the pump are higher this Christmas season than they were a year ago, gasoline remains cheaper than it was before the oil slump began in 2014.

Americans will spend an estimated $850 million per day on fuel this Christmas season, down from $1.23 billion in 2013, according to a report by Oil Price Information Service.

"It's much, much cheaper than it was in a number of years," said Tom Kloza, formerly with gasbuddy.com. Kloza is the global head of energy analysis for the Oil Price Information Service.

In 2015, gasoline prices during the Christmas season were the lowest for that period since the 2008 financial crisis.

On Tuesday, some service stations in Arkansas were selling gasoline even cheaper. In Siloam Springs in Benton County and Sheridan in Grant County, gasoline can be purchased for $1.81 a gallon, according to gasbuddy.com, the price-tracking website.

The highest prices for gasoline in the state can be found in Hope in Hempstead County and Turrell in Crittenden County, where stations list the price of regular gasoline at $2.69 a gallon, according to gasbuddy.com.

Gasoline prices, which have increased since OPEC's recent deal to curb oil production, are likely to rise further in 2017.

Gasbuddy said Tuesday that it expects American motorists to spend at least $120 to $180 more on fuel in 2017 than they did this year.

A rise in gasoline prices would result from a sustained increase in oil prices, which have dropped since 2014.

Crude prices, which have been cut in half since 2014, have increased after the Organization of the Petroleum Exporting Countries agreed to cut output by 1.2 million barrels of oil a day to balance the market and push prices higher.

"There's so many things that can move the price up or down next year," said Michael Lynch, president of Strategic Energy and Economic Research Inc. "There's still demand uncertainty because of the Chinese economy, concern that [President-elect Donald] Trump will cause a trade war, and just uncertainty in places like Mexico and Canada."

"The reason we are starting to get higher gas prices is a good reason: the economy is recovering and we are starting to see a little bit more demand," said Rob Lutts, president and chief investment officer for Cabot Wealth Management in Massachusetts.

"I think the Trump administration could create a bull market and optimism among CEOs," he said. "I think the market is saying, yes they are seeing more investment, and that will translate into more healthy wage gains for individuals."

How much of an impact a jump in gasoline prices would have on consumer spending is unknown. When the oil slump first began, many analysts and economists were puzzled by consumers' response.

They had said the subsequent decline in fuel prices would equate to a tax break for Americans and spur consumer spending. However, instead of spending more, consumers saved their extra cash or used it to pay down debt.

Increases in gasoline prices tend to "disproportionately" affect people of lower income and who have to drive farther to get to places, such as work, said Kathy Deck, director of the Center for Business and Economic Research at the University of Arkansas at Fayetteville.

"Obviously, gas price changes affect everybody, but they tend to change the consumption habits of lower income individuals," she said.