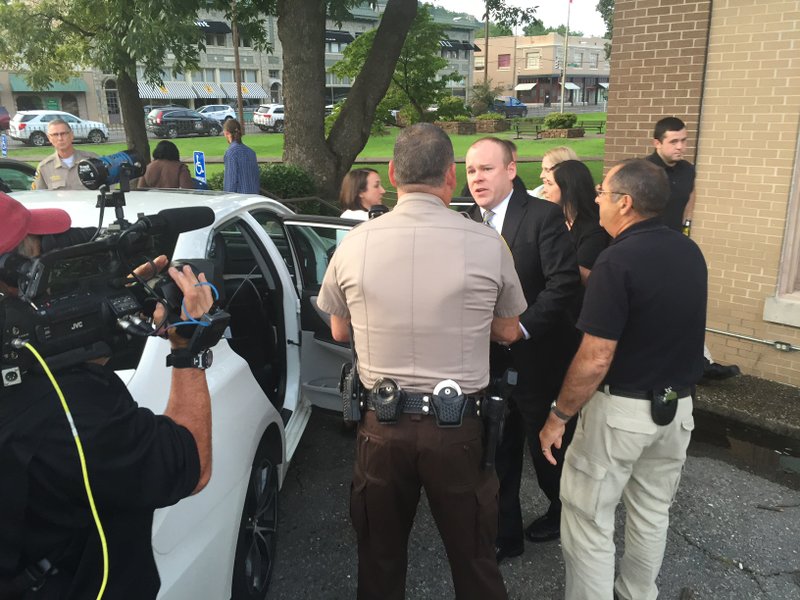 Garland County Circuit Judge Wade Naramore leaves court Friday after being acquitted of negligent homicide in the hot-car death of his 17-month-old son.

HOT SPRINGS — Suspended Garland County Circuit Judge Wade Naramore has been acquitted of negligent homicide in the hot-car death of his 17-month-old son.

The 12-member jury returned the not-guilty verdict around 7:20 p.m. Friday after both sides had presented closing arguments in the five-day trial.

About 45 minutes after deliberation began around 5:40 p.m., the 12 jurors returned to the courtroom, declaring that were deadlocked in a 10-2 vote. Twenty minutes later, the jury returned again and said that only one juror had switched to the majority vote.

Each time, the judge requested that jury take more time to reach a consensus, stating that the jurors had received all of the information necessary from the court to develop a verdict.

Do you agree with the jury's decision in the hot-car-death trial?

The Naramore family drives away from the Garland County courthouse after Friday's acquittal. #ArkDG pic.twitter.com/6s0pKPjRRj

Photo by Brandon Riddle
Wade Naramore hugs one of his attorneys as he leaves court Friday after being acquitted of negligent homicide in the death of his 17-month-old son.

Naramore found his son, Thomas, on July 24, 2015, in his car hours after leaving for work, running errands for he and his wife’s fifth wedding anniversary and returning home from court, he told police. The child's core body temperature was determined to be 107.2 degrees.

Friday’s proceedings included testimony from Naramore, who emotionally described the plans he had made that day and the horror he said he felt upon discovering that his son had been left in his car for more than five hours.

Earlier this week, Naramore’s mother, mother-in law and brother-in-law as well as Thomas’ pediatrician and day care teacher testified. Their statements were raw with emotion at times as Naramore looked on, holding a devotional book and crying.

The courtroom broke out in loud cheers as the verdict was read aloud by Special Judge John Langston. Naramore’s wife, Ashley, ran over to embrace her husband shortly after.

The jury deliberating in the negligent homicide trial of Garland County Circuit Judge Wade Naramore reported it is divided 11-1 on a verdict.

The jury did not reveal which side favored guilt and which side was voting for innocence. Special Judge John Langston ordered them to continue deliberating to attempt to reach a consensus.

Check back for updates.

The prosecution's closing argument attempted to discredit factors cited by a defense witness in the hot-car death of Naramore's son, Thomas, calling them merely excuses.

Meanwhile, the defense contended that the factors — a change in Naramore's normal routine, sleep deprivation and unusual stressors, among others— only served as a way of explaining what happened that day and did not excuse the judge.

The state additionally argued that such factors were "smoke and mirrors" that had no relevance to the charge.

"It's not about the defendant. It's about Thomas," prosecutor Gina Knight said, accusing Naramore of focusing the attention on himself after his son's death in 911 calls and interviews.

Defense attorney Patrick Benca rebutted that in his argument: "Is there any evidence to show that this man put himself first?"

Benca also re-emphasized the seven-month time frame it took for charges to be filed against Naramore. He again called into question the credibility of certain law enforcement officials such as Hot Springs investigator Mark Fallis in their investigation.

Each side was allotted about 45 minutes to present its closing argument. The jury began deliberating about 5:45 p.m.

Closing statements and jury instructions were set to begin around 3 p.m. after the conclusion of court business between special Judge John Langston and attorneys on both sides. The jury was instructed to leave the courtroom around 2:30 p.m.

The defense's last witness was Naramore's mother, Karen Naramore, who spoke about the moment she received a call from her son the day of her grandson's death in July 2015.

Karen Naramore told the court that she was at work when she answered, unable to get complete sentences from him.

"He wasn't supposed to be there," she recalled her son saying on the other line.

Shortly after, she said, the phone call abruptly ended and she left her office to later find police stationed near Wade Naramore's home and learn of Thomas' death.

In court, Naramore provided an account of July 24, 2015 — the day his son, Thomas, died — and said that he was almost immediately willing to be cooperative with police, attempting to downplay the state's assertion that the defense had delayed certain key elements of the investigation.

"I wanted to tell people what happened," Naramore said on the stand, adding that he had tried countless times to provide a statement.

The prosecution had previously pointed to a four-month delay in questioning the judge in his son's death.

At times, Naramore's testimony drew emotional outbursts from family members seated in the courtroom, including when he was shown pictures of Thomas.

"That's my baby, my baby boy," Naramore said repeatedly, unable to keep his composure. Family members seated on the front row could also be heard sobbing.

A question by state attorney Tom Young asking whether Naramore "failed" in his job as a father drew gasps from those in the courtroom.

"I lost awareness of him in the car," Naramore responded, adding that "the most horrible thing that I could ever imagine happened."

HOT SPRINGS — On the fifth day of the negligent homicide trial of Wade Naramore, his sister-in-law told jurors she had forgotten her daughter in her car on two different occasions.

Erin Finzer, a Spanish professor and department chairman at UALR, said she was was sleep-deprived from working day and night to achieve tenure.

She bypassed her nearly 2-year-old daughter's day care and pulled up in the parking lot at the college. It wasn't until Finzer opened the back door to retrieve her bag that she saw her daughter still strapped in the car seat.

The same scenario repeated itself about six weeks later.

Finzer also testified that in the days that followed Thomas Naramore's death, Wade Naramore would wake up from sedation wailing as he had flashbacks.

She said he was screaming "Why God why" and "How did this happen?"

Two grief counselors were sent from UALR to assist the family during the days after Thomas' death.

Six witnesses for the defense have the taken the stand so far Friday morning.

Naramore, a Garland County circuit judge, faces the misdemeanor charge in the death of his 17-month-old son, who died after being left in a hot car in July 2015.

The trial began Monday with jury selection and continued with the start of testimony Tuesday. The prosecution rested its case Wednesday.

Check back for updates and read Saturday's Arkansas Democrat-Gazette for full details.