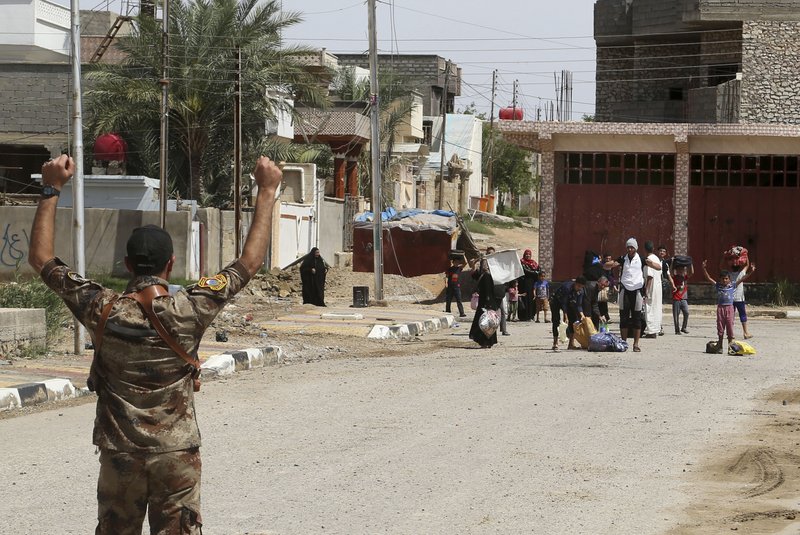 An Iraqi soldier instructs displaced people to raise their hands to check for suicide bombers during fighting between Iraqi security forces and the Islamic State group during a military operation to regain control of Hit, 85 miles (140 kilometers) west of Baghdad, Iraq, Wednesday, April 13, 2016. (AP Photo/Khalid Mohammed)

The fight for Hit, a small Euphrates River city west of the capital, Baghdad, has become pivotal in Iraq's campaign to claw back territory from the Islamic State in the sprawling province. The city sits along an Islamic State supply line that links Iraqi territory controlled by the extremist group with its base in Syria.

Iraqi military officials and the U.S.-led coalition fighting the Islamic State believe that by clearing the city, the Iraqis can build on recent territorial gains in the vast desert.

Gen. Abdel Ghani al-Asadi, who leads the counterterrorism troops, said that at this point his men control most of Hit but that Islamic State fighters are still hunkered down in far-flung areas of the town from where they are putting up heavy resistance.

He said that late into Wednesday night, front-line commanders were calling in coordinates to coalition forces at the nearby Taqaddam air base, about 31 miles away.

Al-Asadi said his men are facing tough counterattacks because, unlike Ramadi -- a far larger city and the provincial capital of Anbar -- he believes Hit was a more important stronghold for the Islamic State militants.

In chatter that the commander overheard from intercepted militant radio communication, Islamic State fighters were saying that "this is our headquarters and we will never leave this area," al-Asadi said.

On Thursday, Iraqi forces on the southern edge of Hit moved down the street of residential blocks, calling for coalition air support before advancing just tens of yards at a time. A handful of Humvees provided cover as a bulldozer was erecting a roadblock from rubble and abandoned vehicles to prevent potential suicide car bombings.

Dozens of Hit civilians holding white flags of peace were seen walking out of the city through rubble and across the front lines.

Shops along all the city's streets were shuttered. Some blocks appear to have been completely leveled by the fighting.

"Toward the end, there was nothing here, no doctors for my children or my mother. We just stayed in our houses," a resident identifying himself as Abu Muhammed said as he fled with his family. "We just had tea and sugar left in the kitchen at the end."

Iraqi officials estimate that more than 20,000 civilians have fled Hit since the beginning of the operation to retake the city. Thousands more remain trapped inside the town and in its outskirts, al-Asadi said, slowing the last stages of the fight.

After overrunning Iraq's second-largest city, Mosul in 2014, Islamic State militants swept across northern and western Iraq, linking the group's territories in Iraq and Syria and declaring their extremist caliphate. Despite a string of territorial victories against the Islamic State, the group still controls large amounts of territory straddling the Syria-Iraq border.

Information for this article was contributed by Khalid Mohammed of The Associated Press.

Print Headline: Iraqis call in jets in battle for Hit