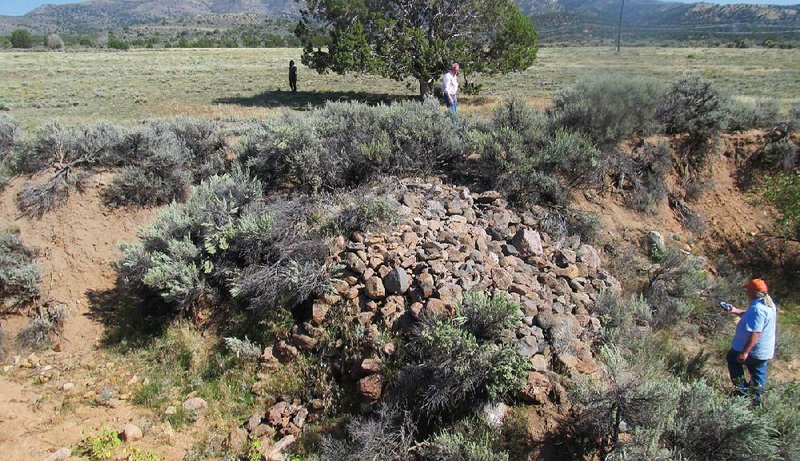 One of two rock sepulchers containing the bones of victims of the Mountain Meadows Massacre sits in a field in southern Utah. The other is about 1,000 feet away.

HARRISON -- Two mass-grave sites for victims of the 1857 Mountain Meadows Massacre have been located in southern Utah, an archaeologist said. 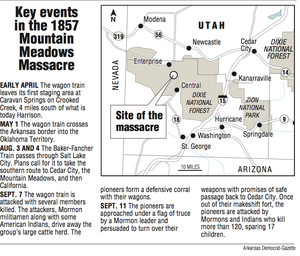 Photo by Arkansas Democrat-Gazette
Map and key events in the 1857 Mountain Meadows Massacre. 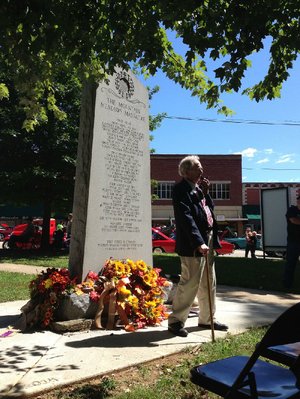 Photo by Bill Bowden
J.K. Fancher, a distant relative of Alexander Fancher, speaks Saturday in Harrison at an event marking the anniversary of the 1857 Mountain Meadows Massacre.

Everett Bassett said he found the rock tombs by using U.S. Army records from 1859 and locating the California/Old Spanish Trail.

Bassett said he was sitting on a pile of boulders when he realized that the rocks were the top layer of a tumulus, an archaeological term for a burial chamber or sepulcher.

"It was like getting hit in the stomach," he said.

Bassett presented his report Saturday night at a meeting in Harrison of the Mountain Meadows Monument Foundation.

"The graves are huge," Bassett told about 100 people at the Quality Inn Convention Center. "The men's grave is 35 feet across."

Bassett said afterward that the site includes an apron of riprap around the men's tumulus, which is in a ravine. The women and children's sepulcher has no such apron, he said. The two sepulchers are the same size -- 8 feet wide, 12 feet long and about 4 feet high, and they're oriented in the same east-west direction, he said.

Bassett of Forest Knolls, Calif., is a senior biologist for Transcon Environmental Inc., a firm that does environmental analysis. Bassett, who has 30 years of experience in historical archaeology, said he took a personal interest in the Mountain Meadows Massacre and did the research on his own to locate the burial sites.

About 120 people died in the massacre as their wagon train traveled from Arkansas to California. Most of the victims were from north Arkansas -- in what would now be Boone, Carroll, Crawford, Johnson and Marion counties. They were killed by Mormon militiamen and American Indians.

The massacre site, 33 miles north of St. George, Utah, was declared a national historical landmark in 2011. While the site of the initial attack has been accurately marked, the burial sites of most of the victims haven't, Bassett said.

Bassett said he visited the Mountain Meadows historical site in the summer of 2014 and realized that monuments for the two main grave sites were in the wrong places. That's when he began researching the Army records and the location of the California/Old Spanish Trail.

"None of these graves are in the area set aside for the national monument," Bassett told the crowd Saturday.

Ben Pykles, a historic sites coordinator for the Mormon Church, attended the event Saturday in Harrison and said he hasn't had a chance to read Bassett's report.

"I'm interested," said Pykles, who has a doctorate in historical archaeology. "I'm looking forward to looking into it further. Because of our involvement in the site, we're clearly interested."

Some of the victims are buried at the site of the initial attack, where a modern monument was built in 1990 to replace more rustic cairns that had marked the location since the massacre.

The Baker-Fancher wagon train was attacked while the travelers were camped at Mountain Meadows, a staging point before crossing deserts on the way to California. The settlers on the wagon train held off the attackers for five days.

Then, on Sept. 11, 1857, Maj. John D. Lee approached the wagon train, offering safe passage to Cedar City if the travelers would lay down their weapons. They did and were then executed after being marched away from the battle site. Only 17 children under age 8 were spared.

Lee was tried and convicted in the massacre. He was executed by firing squad at Mountain Meadows on March 23, 1877.

Exactly why the wagon train was attacked and the people massacred has been debated over the past 158 years.

Some historians cite hostilities between Mormons and the federal government, saying the wagon train just happened to pass through Utah at a volatile time.

Others cite the murder of Parley Pratt in Arkansas on May 13, 1857. Pratt was a Mormon apostle and is the great-great-grandfather of former GOP presidential candidate Mitt Romney.

The massacre victims were initially buried in shallow graves, but erosion and animals soon exposed the remains.

The trail was the Interstate 40 of its day, with wagon trains passing through on the way to California. Bassett said having the skeletal remains of a massacre along the California/Old Spanish Trail was an embarrassment for the federal government.

So 20 months after the massacre, the U.S. Army sent 207 soldiers to collect and bury the bones, which by that time were mostly fragments. According to the Army's description, the tombs are basically ossuaries, containing piles of human bones rather than skeletons of individuals, Bassett said.

The sepulchers haven't been excavated.

Bassett said he doesn't know if the bones are in the tombs or are underneath them. He said the bones could have been placed on top of a layer of boulders, then covered with another layer of rocks.

"Soldiers collected hundreds of bones and put them in here," Bassett said, referring to the sepulchers. "I don't know how many bones are under them, but we do know these are the grave sites."

Bassett said the sepulchers are within 5 feet of the locations described in Army records from 1859. He said earlier researchers may have missed the tombs because they were mistaken about the location of the California/Old Spanish Trail.

"I figured out where the road was," he said. "Then I went back and started going through the historic records. It took 20 minutes to find them."

Bassett said he's surprised that the burial sites weren't discovered before now because the Army records are very accurate. The burial site for the women and children is within sight of Utah Highway 18, he said.

"Truckers were driving by honking at me," Bassett said. "The location where the women and children were massacred is right in the middle of the highway, to some extent."

The monuments and markers for the burial sites are vague on exactly where the victims are buried.

"Now, instead of saying it happened out there somewhere, we'll be able to say it happened right here," Bassett said.

Bassett said the burial sites don't look like what people would expect. Because the tomb for the men is in a ravine, it's difficult to see from above ground, he said.

"When you look at it from above, it looks like a farmer was dumping rocks in a ravine," Bassett said. But the sites are "carefully engineered," he said. Basalt and granite rocks were used instead of sandstone, which is considered of lower quality, said Bassett.

"It becomes immediately obvious when you look at these that they're not just the result of land clearing," said Scott Fancher, a Harrison lawyer who is a "collateral descendant" of Alexander Fancher, one of the wagon train's leaders.

"I think a lot of the story is going to be 'What's next?' And that frankly remains to be seen," Fancher said.

Shannon Novak, a bioarchaeologist from Syracuse University who specializes in trauma and mass death, said the stone structures Bassett found do appear to be grave sites.

Novak, who attended the meeting Saturday in Harrison, said the remains of 28 people are buried in a cairn at the battle site.

"So when you think about that, there are still approximately 100 individuals unaccounted for," she said. "So the vast majority of the people who were murdered are probably in these cairns. They were meant more as graves, to keep the wolves out and the bodies in."

Novak examined bones of some of the victims that were inadvertently unearthed at the battle site. She's the author of a book titled House of Mourning: A Biocultural History of the Mountain Meadows Massacre.

Bassett said he's confident that he has found the grave sites.

"I'm thinking that I might be wrong, but I'm probably not," Bassett told the crowd Saturday.

Bassett said he expects his peers to begin research on his findings to prove him either right or wrong.

"I guess the question now is what do you want to do about it?" Bassett asked the crowd.

"I know it's stressful not knowing where your ancestors are buried," he said. "Maybe if we can put this to rest by knowing where they are, it might create a balm to heal some of these wounds."