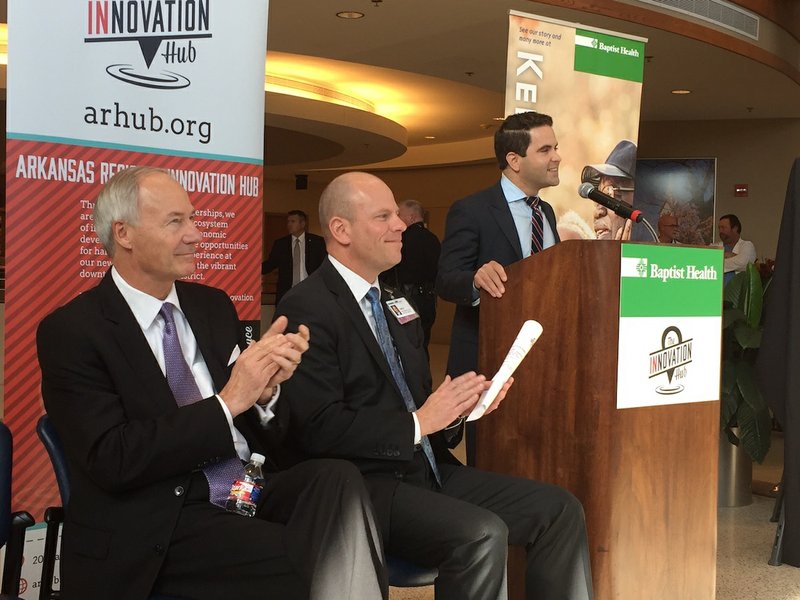 Gov. Asa Hutchinson, Baptist Health and the Arkansas Regional Innovation Hub on Friday afternoon announced a program for startup companies in the health care sector described as the first of its kind in the state.

The HubX "health care accelerator" will allow up to 10 startup companies to participate in a 13-week program intended to give a boost to their business concept, culminating in a pitch day.

Hutchinson said the partnership is "at the heart of what we're trying to do in Arkansas," referencing state goals of increasing the efficiency of delivery of health care services.

"To me, the more accelerator hubs that you have in innovation, the greater [the] opportunity for a success story," Hutchinson said after the 2 p.m. announcement at Baptist Health Medical Center in North Little Rock.

The idea is similar in concept to ABC's Shark Tank series that has entrepreneurs vying for a chance to expand their invention's reach, Baptist Health spokesman Cara Wade said.

Troy Wells, president and CEO of Baptist Health, said the goal of HubX is to help turn ideas into "clinical and business realities."

Each of the companies will receive initial seed investments of up to $50,000, mentorship and assistance to grow their concept, officials behind the project said during Friday's announcement.

The Iron Yard, which operates a digital health accelerator, is also a partner in the HubX project.

Applications for the privately funded program will be accepted through Feb. 15 on the HubX website, hubx.biz. The accelerator will be hosted at the Innovation Hub from April to June.