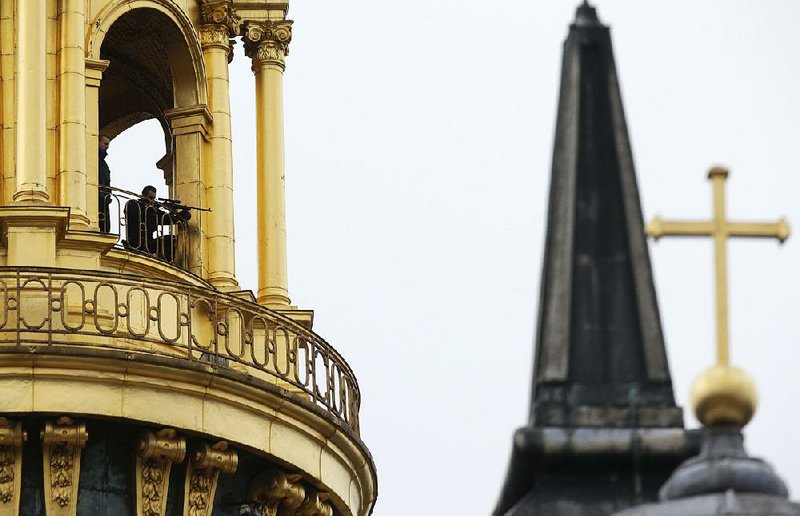 A sniper takes position Thursday in the dome of the Hotel National des Invalides in Paris as French President Francois Hollande attended a military ceremony. The information private companies can pass along to authorities in France and Belgium to help in the investigation of the Paris terrorist attacks is limited because of stricter European privacy laws. - Photo by AP / PHILIPPE WOJAZER

Information held in technology company databases would have been useful to the investigators scouring neighborhoods in France and Belgium last week in search of suspects involved in the Paris terrorist attacks.

"In situations like this, governments and proper authorities need to have access to more data because the key to finding these guys is the data," said Charles Morgan, former chief executive for Acxiom.

It is unknown whether any tech and data companies are assisting intelligence agencies with their investigations of the Paris attacks. Acxiom, which has operations in Europe and an office in Paris, declined to comment for this story.

Acxiom assisted the FBI in gathering information about the 19 hijackers involved in the Sept. 11, 2001, terrorist attacks.

And while the government sector is a small part of Acxiom's business, the company has held contracts over the years with the Central Intelligence Agency, the State Department and other agencies.

Most people leave a data footprint, a fact that attracts law enforcement and intelligence agencies to Acxiom and other tech companies.

The data trails vary. The data can come from bank accounts, rental or home addresses, travel patterns, phone records, online activity and even purchasing history. Data-mining companies collect similar information on millions of people and sell the data to clients such as retailers, which use it for targeted marketing campaigns.

Combining behavioral information with biographic information -- such as names, addresses and fingerprints -- can help identify both a person involved in an attack and potential links he has to terrorist organizations, experts say.

"That adds a lot to the picture that law enforcement can get as to what likely happened in this scenario," said Keith Miller, with MITRE, a not-for-profit organization that operates research centers sponsored by the federal government.

"We had all of this crazy stuff that we were able to put into one big database and try to figure out who these bad guys were and who they were associates with," said Morgan, who was Acxiom's lead executive in 2001.

The U.S. government now has access to much more data through its own agencies and is more prepared than it was in 2001, said Morgan, who characterized it as "an absolute data desert" before Sept. 11.

In 2014, Acxiom told the Arkansas Democrat-Gazette that although the company doesn't share much of its data with government agencies, it does offer identity-verification services.

Despite the huge amount of data that Acxiom and other companies collect each year, the depth and amount of information they might be able to provide authorities in France and Belgium is limited because they have stricter privacy laws than the United States, Morgan said.

"You can't paint the picture in Europe like you can here in the U.S., because we got data not only from public-record stuff -- we got data from the banks and from the credit bureaus, and we got some airline data, and the U.S. government shared with us, quite illegally I might add, entry and exit data from immigration services," he said.

A debate focused on the need for law enforcement and intelligence agencies to have access to data and on the competing need to protect the privacy of individuals has been ongoing since the Sept. 11 attacks. The discussion has leaned more toward protecting privacy in recent years, especially in light of recent disclosures regarding government spying.

But in the days after the Paris attacks, the debate regarding data collection and surveillance has been renewed, with policymakers and intelligence officials pushing for access to data and information for national security reasons.

Propelling the debate is the belief among intelligence officials that the Paris terrorists used encrypted communication, including through smartphone apps and video games. The Islamic State, also known by the acronyms ISIS or ISIL, has claimed responsibility for the attacks.

CIA Director John Brennan said last week that the majority of the Internet and cyber infrastructure is held by the private sector and that there needs to be more sharing of "cyberthreat information" between private businesses and the government.

"We should be sharing a lot more information than we do as a nation, but programmatic, technical and legal challenges -- as well as concerns about privacy and the role of the government -- have hampered progress," he said.

The debate regarding surveillance and personal data in recent years has focused on the National Security Agency's mass surveillance of phone and Internet communications, which was revealed by leaker Edward Snowden in 2013. But there has also been an increase in concerns about the existence of big data and privacy in the United States and abroad.

In his talk last week, Brennan said "hand-wringing" over government surveillance and leaks about intelligence programs has made it harder to identify terrorists. While he did not say so specifically, he appeared to be speaking of the NSA disclosures.

"And I do think this is a time for ... us to take a look and see whether or not there have been some inadvertent or intentional gaps that have been created in the ability of intelligence and security services to protect the people that they are asked to serve," Brennan said during a talk in Washington, D.C.

Others have pushed back against the calls for mass surveillance after the Paris attacks, saying that personal privacy must be protected.

"There has to be a balance here between national security and privacy, and we shouldn't use this tragedy as an excuse to undermine people's privacy," said Jeff Chester, executive director of the Center for Digital Democracy.