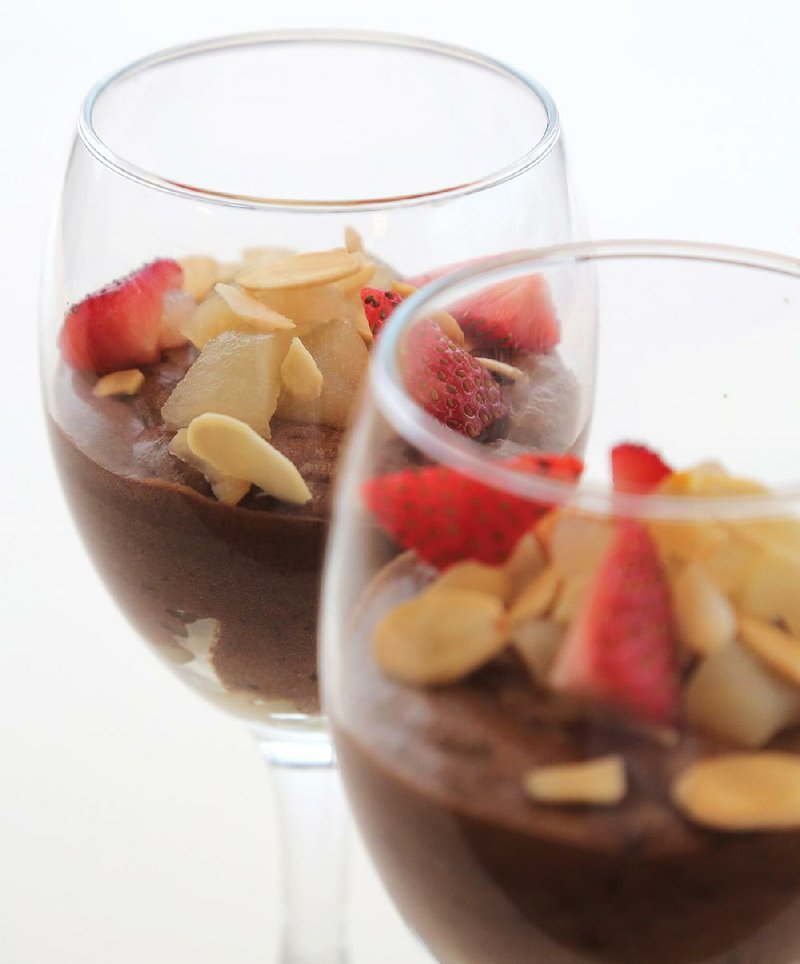 How we prepare dried beans: Soak them, cook them, drain and discard the liquid. 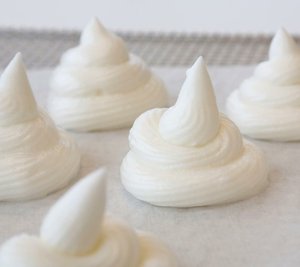 Photo by John Sykes Jr.
Parchment paper or a nonstick baking mat is essential equipment for baking Basic Vegan Meringues. Meghan Cantlon and Dr. Meenakshi Budhraja use a digital dehydrator rather than baking their meringues in an oven. 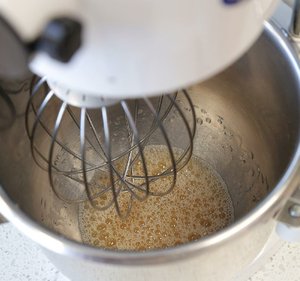 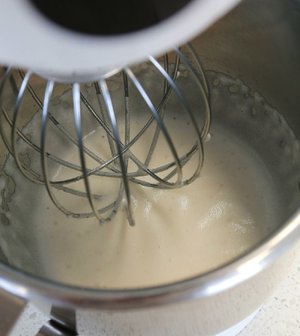 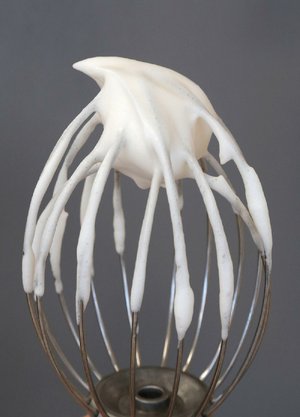 How we prepare canned beans: Open the can, dump the liquid, rinse the beans, cook the beans.

We want the beans, not the water they soak in. ... Or rather, we did -- until word emerged from the kitchens of dessert-loving vegetarians on two continents that bean water whips into a foam with stiff peaks. Into meringue, in other words.

Thanks to amateur cooks collaborating via the Internet, bean water has a new name -- "aquafaba" -- and a new starring role in desserts.

Like egg-white meringue, aquafaba meringue might collapse in the oven under certain conditions, most notably if a well-meaning cook skimped on sugar. But once you've got the method down, aquafaba meringue is more reliable than egg-white meringue, says cooking teacher Meghan Cantlon. "It doesn't weep," she says. "It doesn't fall once it sits too long.

"And it's way more magical."

In addition, bean water has already been cooked and so does not need to be cooked again for use in raw foods, as eggs should be. People who are allergic to eggs are not necessarily allergic to beans. And excess aquafaba can be frozen.

"We're just starting out with this aquafaba," Budhraja says, apologetically -- but then so is everyone. Bean water's big break came across the pond in December 2014, when Joel Roessel, an opera singer and food blogger in Paris who wanted to make an eggless meringue, decided to try beating something that looked as disgusting to him as egg whites do -- brine from canned hearts of palm and chickpeas (aka garbanzo beans).

In February, Goose Wohlt, a software engineer in Muncie, Ind., made stable meringue using far fewer ingredients -- just the cooking water from chickpeas and an equal volume of sugar. In March, Wohlt reported his success on the Facebook page "What Vegans Eat," exciting so many cooks who wanted to find out what else aquafaba might do that Rebecca August, an animal care worker in Michigan, set up a recipe-development group on Facebook, "Vegan Meringue - Hits and Misses!" (more than 29,800 members as of Monday).

This fall, group members spun off "Aquafaba Everything," for non-vegans (more than 2,000 members). And there are other groups in various languages.

Participants in the Facebook groups claim success for aquafaba as an egg replacer in macaroons, nougat, marshmallow fluff, royal icing, some cakes (but not angel food cake), brownies, breads, mousse, as a binder in burgers and as an "eggless egg wash" for sticking seeds to buns.

("One of my students did a pasta out of it, and it worked out well," Cantlon says.)

From these crowd-sourced experiments, Wohlt knows aquafaba is an emulsifier, a leavening agent and a foaming agent -- but not a complete egg replacer. But the science behind it is unclear.

Food scientist Howard McGee speculated for The Washington Post that aquafaba's ability to form stiff foam comes from a combination of proteins, carbohydrates and saponins that leach from the legumes into water. "Saponins are soaplike materials that can collect in bubble walls at the interface between liquid and air and stabilize the bubbles," McGee told the Post. "Some proteins can do the same, and both proteins and carbohydrates help thicken the liquid, which makes it slower to drain out of the foam structure."

Wohlt set up the website aquafaba.com to sell aprons and solicit donations toward chemical analysis, which he estimates will cost at least $650. (on Monday, the donation counter showed $590.06.) The website also has history pages, and "I'm working on making the content group-editable when I add the recipe and forum sections," he told the Democrat-Gazette.

Wohlt insists that stiffeners like cream of tartar or vinegar are not necessary for aquafaba meringue, but posters on the Facebook pages report using them. Some also insist that the foam rises only when whipped in metal bowls at low humidity.

Posters universally condemn the use of high-speed blenders, saying the blades create foam but the bubbles collapse. And many have posted comical photos proving that overheating reduces lovely mounds of sugary whiteness to bubbling brown puddles.

In just two weeks of experimenting at Pulaski Tech, Cantlon and Budhraja learned that, while room-temperature aquafaba can be whipped to stiff peaks in 10 to 15 minutes, the foam expands more rapidly when chilled.

"And all we've tried is chickpeas," Budhraja notes. Facebook posters also claim success with the liquid from black beans, butter beans, pinto beans ... any legume, provided that mealy bean solids are strained from the liquid.

While many recipes begin with canned chickpeas, Cantlon and Budhraja's students prefer to start from scratch with dried chickpeas, following directions on the bag and soaking the peas overnight in spring water.

Heat oven no hotter than 250 degrees and line one or more baking sheets with parchment paper. (See note.)

Pour the chickpea liquid (aquafaba) into the bowl of a stand mixer and beat with the whisk or balloon attachment until stiff peaks form, about 15 minutes. Gradually beat in the sugar, then the vanilla.

Tip from Wohlt's original recipe: Add the sugar very gradually, a tablespoon at a time, beating after each addition. After all the sugar is incorporated, feel the foam, and if it has any grittiness, keep whipping until it's smooth.

Scoop or pipe the aquafaba mixture into mounds on the baking sheet(s) and heat for 90 minutes. (The meringues will be hard to the touch.) Let meringues cool with oven door open, then peel from the paper and serve.

Meringues can be stored in an airtight container for up to 3 days.

Note: Wohlt's recipe calls for 176 degrees to 230 degrees. Cantlon and Budhraja prefer to use a digitally controlled dehydrator rather than baking their meringues, which removes the possibility of accidental overheating.

Recipe adapted from "How do I make meringues?" by Goose Wohlt, "Vegan Meringue - Hits and Misses!" Facebook page

Swift says, "This recipe is meant to taste just like traditional mayonnaise that is made with eggs, which it does. If you would like for it to taste more like the Follow Your Heart Vegenaise, try adding only a teaspoon of vinegar and up to a teaspoon of maple syrup or other liquid sweetener in toward the end of blending."

As the oil begins to emulsify, he warns, "try not to happy dance so much that you injure yourself -- not that I know from experience."

Vegan Mayonnaise From The Veg

3 tablespoons liquid from a can of chickpeas (at room temperature)

Using an immersion blender, in a small bowl, combine the vinegar, ground mustard, salt and chickpea liquid and mix briefly, just until combined.

With the immersion blender running, slowly drizzle in the oil, 1/4 cup at a time. The mixture will start to become very thick; move the blender around to get it all combined. When the mixture no longer runs off the blender, stop adding oil.

Transfer the mayonnaise to a jar and store in the refrigerator. The mixture will thicken more as it cools. Use in place of mayonnaise in any recipe.

It keeps about a week in the fridge but might need to be stirred.

Cantlon, Budhraja and Dr. Maryelle Vonlanthen, a gastroenterologist and founder of Arkansas Wellness Forum, recommend this three-ingredient mousse. Vonlanthen says the cream of tartar is needed to keep the mousse firm.

Enjoy the mousse on its own or layer it over fresh or blanched sliced fruit to make parfaits.

Liquid from 1 (15-ounce) can chickpeas

Drain the chickpea brine (aquafaba) into a medium-size bowl and save the chickpeas for another use.

Using an electric mixer with a whisk attachment, beat the aquafaba 10 to 15 minutes, or until stiff peaks begin to form. When you can tip the bowl upside down without the aquafaba moving, add the cream of tartar and beat to incorporate. Place the whisked aquafaba in the refrigerator to chill.

Melt the chocolate in a double-boiler set over simmering water. After a few minutes, the chocolate should be melted; stir with a wooden spoon until silky and glossy. Set aside to cool; add sweetener, if using.

When the chocolate is cooled but still molten (you don't want it to be too pasty, but on the other hand, warm chocolate will ruin the recipe) add a dollop of the whisked aquafaba. Gently -- very gently -- fold it into the chocolate. Continue this process with the rest of the aquafaba until there is none left. You will notice the mousse will gain a lot of volume. It's important that you complete this step slowly so as not to beat the air out of the whisked aquafaba.

Pour the mousse into 4 little pots or cups. Refrigerate for at least two hours to set. Garnish as desired just before serving.

Recipe adapted from Clemence Moulaert and One Green Planet