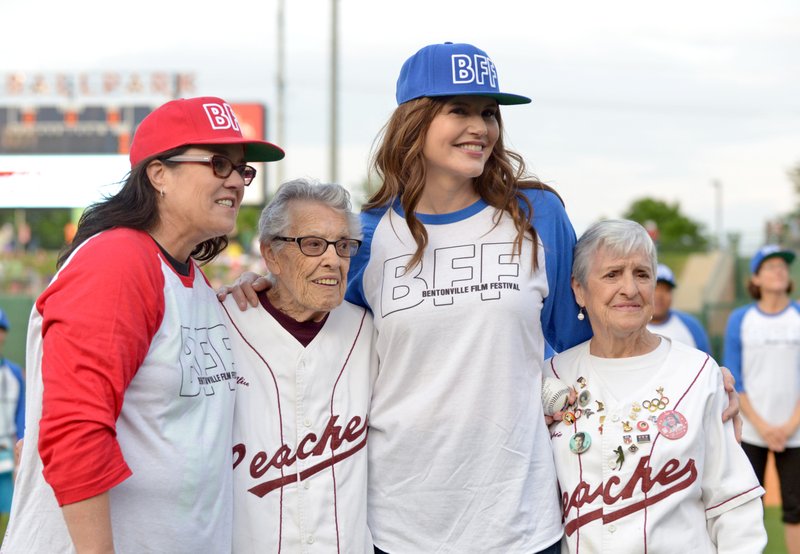 Rosie O’Donnell (from left), Alice Fracasso, Geena Davis and Gina Casey pose for photos Thursday before the start of the game and at the A League of Their Own celebrity softball game at Arvest Ballpark in Springdale. Fracasso and Casey were players in the All-American Girls Professional Baseball League that inspired the film A League of Their Own, starring O’Donnell and Davis. For photo galleries, go to nwadg.com/photos.

Her first inning on the mound didn't go as well. She gave up six runs without recording an out before full-time Hollywood personality and part-time softball manager Rosie O'Donnell pulled her from the game.

Evans and O'Donnell joined celebrities such as actress Melissa Joan Hart, Olympic gold medal winning softball player Jennie Finch and a host of others well-known guests for the game. The event comes courtesy of the first Bentonville Film Festival, sponsored by the Geena Davis Institute on Gender in Media.

A softball game in the middle of a film festival makes perfect sense considering Davis and O'Donnell both starred in A League of Their Own.

The 1992 film, which also starred Tom Hanks, found its inspiration in the All-American Girls Professional Baseball League, an all-female league that ran from 1943-1954. Two associate members of that organization, sisters Gina Casey and Alice Fracasso, aged 85 and 90, respectively, joined the festivities on a beautiful spring evening at the stadium.

The new film festival has a mission to support women and minorities in the film industry. Casey, called "Chirpie" by her friends because she talked so much, reminisced about the barriers she and her fellow ballplayers faced.

"There were good, good ballplayers then," she said. But they weren't trained for the sport like their male counterparts. The couldn't participate in sports in school, unless the enrolled in ballroom dance.

Fracasso said she wasn't up for a game on Thursday night, but Casey wanted her chance.

"I'd get out there in a heartbeat," she said.

Casey and Fracasso greeted guests on a blue carpet affair that preceded the game. The carpet was blue, instead of the traditional red, because Walmart is a major sponsor of the festival.

Instead of playing, the sisters watched the blue team, coached by Davis, face off against the red team, coached by O'Donnell. Players in the original league inspired the movie, and on the blue carpet, Davis said the film inspired a whole new crop of female athletes.

"So many girls play sports because of that movie," she said. For the blue carpet, Davis wore her faded Rockford Peaches ball cap, a prop she saved from the film.

Davis' mission for her institute is to inform film industry executives about the lack of important roles in films, specifically in children's media. If girls watching television programs can see their onscreen contemporaries doing important work, they might be inspired to do the same. The softball game can work in the same way, Davis said.

"It has the side benefit of girls seeing girls doing interesting things," she said.

The game proved interesting, if fast paced. The four-inning contest featured a rotating cast of celebrity players, and actor Judge Reinhold served as a celebrity announcer, calling the action from the press box while his wife, Amy Reinhold, joined the players.

Rounding out the teams were players such as Walmart president and chief executive officer Doug McMillon and personnel from both the film festival staff and sponsor organizations such as Campbell's Food, which handled out free sample-sized portions of pork-covered fries and nachos before the game.

The game ended in a 7-3 score, with Davis' blue team the victors. O'Donnell conceded defeat in the minutes after the contest ended, telling the crowd Davis had all the good players. O'Donnell also faked like she was crying, which prompted Davis to offer the most famous line from A League of Their Own in her direction.

"There's no crying baseball!" Davis told O'Donnell, echoing the words used by Hanks in the movie.

Following the contest, fans were let down on the field to watch a screening of A League of Their Own. The movie was stopped after about 30 minutes because of storms approaching the area. Fans were instructed to leave the stadium for their safety.

Kevin Kinder can be reached by email at [email protected] or on Twitter @NWAWhatsup.

Print Headline: Stars get a game of their own