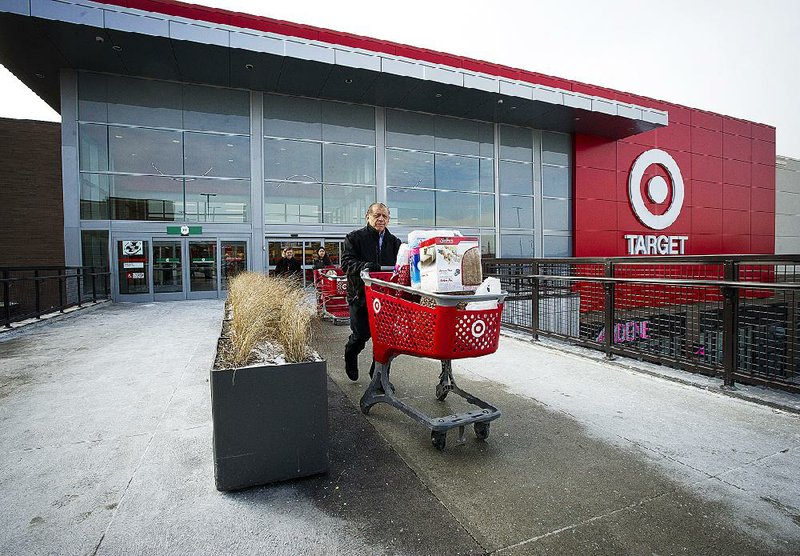 Shoppers exit a Target Corp. store with their shopping carts n Toronto, Ontario, Canada, on Thursday, Jan. 15, 2015. Target Corp. will walk away from Canada less than two years after opening stores there, putting an end to a mismanaged expansion that racked up billions in losses. Photographer: Kevin Van Paassen/Bloomberg

WASHINGTON -- Before the recession, big-box retailer Target was riding high.

Its sprawling stores were popping up in seemingly every suburb in America, and its well-designed stores and cheap, chic styles made it appeal both to low-income consumers who might have shopped at Wal-Mart and to upscale shoppers who simply loved the thrill of a deal.

It was the era when it became common for loyal customers to affectionately refer to it as "Tar-zhay," a tongue-in-cheek French pronunciation that captured how they felt about the brand: It delivered a luxe shopping experience, even though the prices were low. In a presentation to investors last week, Target executives said its core customer at that time was the "Boomer Mom," someone who "drives a minivan," "lives in the suburbs" and "wants it all."

But then the economic downturn threw the company for a loop.

Instead of sticking with the trendy clothes and housewares that rocketed it to success, Target emphasized rock-bottom prices and offerings in essential categories, such as groceries. The strategy didn't work well. Chief executive Brian Cornell said last week that Target "lost its brand balance" during this time, focusing too much on deals and not enough on the chic styling that made Target stand out from its rivals.

The problems for Target haven't stopped there: Its first international business, a fleet of stores in Canada that opened two years ago, are to be shuttered because they are failing. And, of course, a massive data breach in 2013 cost it sales and customer trust.

Target's new chief executive, Brian Cornell, has big plans for revitalizing the troubled company. And one of them is looking beyond the minivan-driving suburban mom to build its base of shoppers -- or guests, as they're known in company lingo.

"Our guest is going to be increasingly a Hispanic shopper," Cornell said at the investor event.

There were a few indications that Target is going to be highly focused on winning this demographic going forward. In his portion of the investor presentation, chief marketing officer Jeff Jones presented company research on how many Target shoppers identify the store as their "favorite," a measure they see as a proxy for brand affinity. While just 38 percent of Target shoppers overall identify the store as their favorite, some 54 percent of Hispanic millennials said it was their favorite.

The baby department is one of four signature categories that Target is looking to emphasize to its customers, and Jones said Hispanic millennial moms served as "the creative muse" for its major new marketing campaign for these goods. And it will launch a Spanish-language ad campaign in March with a spot on the hit CW comedy Jane the Virgin. The company says it is a "first for any brand" to do a Spanish-language ad on an English-language network.

Target is also hoping to widen its base of customers by looking beyond the suburbs.

This year, Target only plans to open 15 stores, and just seven of them are the sprawling, big-box outposts that the brand is best known for. The rest are CityTarget and TargetExpress stores, small-format outposts that are geared at an urban audience. So far, these stores have been highly successful, with higher average sales per store and higher gross margins than traditional Target stores. With that kind of performance, it is clear the company has been working to better understand and appeal to the urban shopper.

Beyond nurturing a more diverse customer base, the company said it is going to invest $1 billion in technology and supply chain innovation this year to help boost its digital capabilities. It also plans to cut "several thousand" jobs in the next three years at its headquarters to cut costs and make the business more nimble.

Cornell is also pushing the company to make its style, baby, kids and wellness categories truly distinctive and to re-position its grocery department to feature the healthy, fresh options that its shoppers say they prefer.