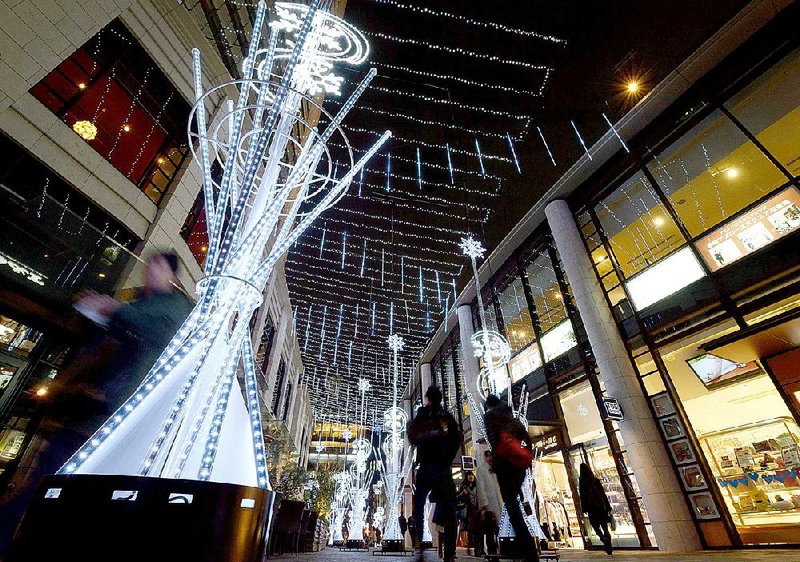 LEDs, like the ones seen here in Tokyo, are built using semiconductors that allow passage of electrons through the material to produce light, requiring less energy than incandescent bulbs that heat a wire filament until it glows. Japan could cut annual electric spending by as much as 1 trillion yen ($8.4 billion) within five years by using more LEDs, according to Hiroshi Amano, who shared last yearís Nobel Prize for physics. Illustrates JAPAN-ENERGY (category f) by Chisaki Watanabe (c) 2015, Bloomberg News. Moved Thursday, Feb. 26, 2015 (MUST CREDIT: Bloomberg News photo by Akio Kon).

TOKYO -- Japan's push to keep power flowing after it shuttered its nuclear program may best be illustrated by 73 million light bulbs.

That's the number of LED bulbs sold in Japan since the start of 2012, representing about 30 percent of all bulbs sold there. The LEDs, which consume one-fifth of the energy used by standard lights, are key to the country's strategy to make energy use more efficient, even as it pursues alternative sources such as solar power.

Four years after the Fukushima nuclear meltdown spurred the closure of Japan's many reactors -- knocking out 30 percent of Japan's power supply -- the drive to reduce energy consumption has sparked a national campaign that includes everything from improved insulation for homes to train stations powered by the braking of subway cars and vending machines that recycle waste heat and generate power with solar panels on top.

"There's no doubt Japan has some of the most advanced technologies in energy saving," said Takumi Fujinami, a senior researcher at the Japan Research Institute. "And there is still room for saving energy dramatically."

Since Fukushima, the nation's utilities have been forced to fire up older power plants that rely on fossil fuels such as natural gas, oil and coal. That has helped make up for some of the capacity, but not all. The decision to reduce consumption was a natural ally in the effort.

Hiroshi Amano, who shared last year's Nobel Prize for physics, sees LEDs playing an even bigger role. Japan could cut annual electric spending by as much as $8.4 billion within five years by using more LEDs, according to Amano, one of three Japan-born scientists who were awarded the Nobel Prize in 2014 for their work developing LEDs.

While LED bulbs can cost as much as $10 apiece, compared to as little as 70 cents for incandescent bulbs, the fact that they're more efficient "can extend shelf life and reduce the total cost and power use," Amano told reporters in January.

LEDs, or light-emitting diodes, are built using semiconductors that allow passage of electrons through the material to produce light, requiring less energy than incandescent bulbs that heat a wire filament until it glows.

LED sales in Japan reached $5.2 billion in 2013, according to an October report from the International Energy Agency. Switching all of Japan's lighting to LEDs would save about 92.2 terawatt-hours of electricity, or 9 percent of Japan's total annual consumption, the Institute of Energy Economics in Japan estimated in 2011.

Japan is pursuing a variety of alternatives after shuttering its nuclear plants for safety checks, pulling 47 gigawatts of capacity from the grid. Subsidies for solar power, which are triple what Germany offers, have made Japan the biggest market for the technology in the world behind China. The country may install as much as 12 gigawatts of solar panels this year, according to Bloomberg New Energy Finance.

The options run from old standbys such as making sure homes are insulated to ideas that offer a unique take on how to keep consumption under control.

The government has set a goal for all new public buildings and homes to be net zero energy by 2030, meaning they use only as much energy as they can produce from renewable sources and other generation systems on site. Currently, about 40 percent of existing homes have no insulation, according to a December task force report.

Meanwhile, Mitsubishi Electric Corp. said in September that a system installed at a Tokyo subway station to harvest energy generated by braking subway cars saved enough to run 60 homes. The power is being used for station lighting, air conditioning and elevators, the company said.

All of these efforts are apparently paying off, according to a task force on power demand for the trade ministry.

Power used by the nation's nine regional utilities fell by 10 terawatt-hours in July and August compared with the same period before the Fukushima disaster thanks to conservation measures, the task force found. Overall for the fiscal year ending March 31, consumption fell in eight of the first nine months, with declines ranging from 1 percent to 8 percent.

Results from the consumption campaign are also being felt within the industrial community.

Komatsu Ltd., the world's second-largest producer of construction equipment, is among companies working to reduce electricity use at production sites. An assembly plant that opened in May in the northwestern prefecture of Ishikawa consolidates two old plants and is designed to halve electricity use by incorporating such technologies as energy storage and LED lighting.

"We had been working to cut the power use by half after the Fukushima earthquake, and it turned out the efforts also led to better productivity," said Hiroshi Ishihara, a Komatsu spokesman. Komatsu reduced total electricity use by 38 percent in fiscal 2013 from 2010.