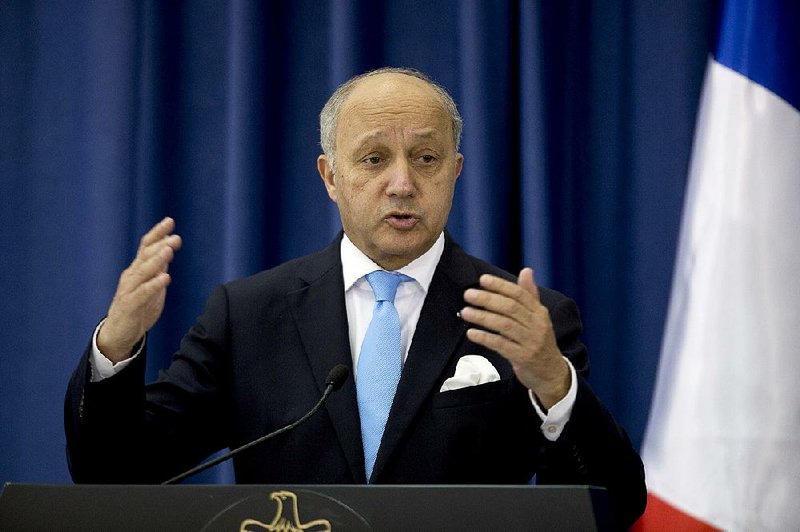 JERUSALEM -- Israeli Prime Minister Benjamin Netanyahu on Sunday rebuffed what he described as an international attempt to dictate the terms of an Israeli-Palestinian peace deal ahead of talks with France's foreign minister, Laurent Fabius, who was visiting the region to advance a French-led initiative. 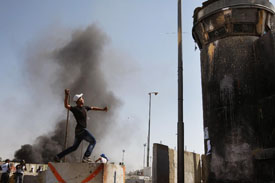 Fabius met Netanyahu in Jerusalem to discuss a French plan for a United Nations Security Council resolution that would lay out a timetable for peace talks.

Palestinian officials and French diplomats say the draft resolution calls for the establishment of a Palestinian state along lines that existed before the 1967 Middle East war, in which Israel captured the West Bank, east Jerusalem and the Gaza Strip.

It also would set a two-year deadline for an agreement.

Israel rejects a return to its pre-1967 lines, saying they are indefensible, and does not want to set a deadline for an agreement.

"A peace that isn't anchored in iron-clad security arrangements on the ground, in which Israel can defend itself, such a peace will simply not survive and we will not agree to it," Netanyahu told Fabius at a news conference before their formal meeting. "A peace deal that ignores these realities will be swept away by the winds of extremism and violence that blow throughout the Middle East."

The Palestinians have welcomed the initiative, hoping the international community will assume a greater role in resolving the conflict after more than two decades of failed U.S.-led peace efforts.

With peace talks stalled for more than a year, France has been sounding out the possibility of relaunching the process with the help of Arab states, the European Union and United Nations Security Council members.

The latest round of U.S.-sponsored peace talks between Israel and the Palestinians broke down last year amid mutual recriminations. Since then, the Palestinians have pursued initiatives to gain international recognition for an independent state while seeking to isolate Israel.

Fabius met on Saturday in Cairo with President Abdel-Fattah el-Sissi of Egypt and with a committee of Arab foreign ministers. Fabius warned Israel and the Palestinians that the stalemate in the peace process risked setting the conflict "ablaze," adding, "We have to do the maximum so that the two sides restart negotiations," Reuters reported.

Fabius said, after speaking with el-Sissi and Jordan's king, that "they both told me the same thing, there is a great concern that if things continue to be frozen like this then an explosion could happen."

At the start of the weekly Cabinet meeting in Jerusalem on Sunday morning Netanyahu said: "The way to reach agreements is only through bilateral negotiations, and we strongly reject attempts to force international diktat on us in regard to both security and peace."

These international efforts, Netanyahu added, failed to address "the security needs of the state of Israel and our other national interests."

Fabius met the Palestinian president, Mahmoud Abbas, in the West Bank city of Ramallah before his meeting with Netanyahu.

"This word 'diktat' is part of neither French vocabulary nor the French proposals," Fabius said at a Ramallah briefing after meeting Abbas, adding that his initiative shouldn't be prematurely judged.

Palestinian Foreign Minister Riad Malki said Abbas told Fabius "the Palestinian ideas match those of the French," and their aim is to "revive the peace process and resume negotiations in order to end the occupation and establish a Palestinian state as part of a two-state solution."

Underlining the rift between the Israeli and Palestinian sides, Malki said shortly before the meeting in Ramallah that it was "late for the international community" to be taking up its responsibilities 48 years after the Israeli occupation of territories it captured in the 1967 war, land that the Palestinians claim for their state.

Malki told the official Voice of Palestine radio station that the French proposal was still at the stage of "ideas" and that there may not be any real European movement until September.

In a reminder of the simmering tensions in the area, a Palestinian resident of the West Bank stabbed an Israeli paramilitary police officer in the neck and chest, severely wounding him, at a busy gateway to the Old City in East Jerusalem on Sunday. The wounded officer shot the assailant, who was said to be about 18 years old. Both were hospitalized in critical condition, according to the police.

The episode came two days after an Israeli man was killed and another injured by a Palestinian gunman in the occupied West Bank, adding to fears of an uptick in violence during the Islamic holy month of Ramadan, which began Thursday.

In an effort to reduce some of the pressure on the Palestinians, Israel said it was relaxing some restrictions on Palestinian movement during Ramadan, providing shuttle buses from West Bank cities to bring Muslim worshippers to Friday prayer at Al-Aqsa Mosque in Jerusalem and assisting in family visits between Palestinians in the West Bank, the Gaza Strip and Israel.

Also on Sunday, the former South African president who helped end apartheid said sanctions against Israel would be "counterproductive."

F.W. de Klerk told Israel Radio Sunday that comparisons between apartheid South Africa and Israel's treatment of the Palestinians are "odious," and that he prefers "dialogue and negotiation as a way to get governments to change their attitudes."

Those who support boycotting Israeli goods or goods made in West Bank settlements often point to a similar campaign credited with having undermined white rule in South Africa. Israel rejects the comparison, and says the boycotts are aimed at delegitimizing its very existence.

De Klerk was the last president under apartheid and, along with Nelson Mandela, ended its systematic racial discrimination.

He says the sanctions against South Africa "hurt the people they were intended to help."

Information for this article was contributed by Isabel Kershner of The New York Times, by Calev Ben-David of Bloomberg News, by staff memebers of The Associated Press