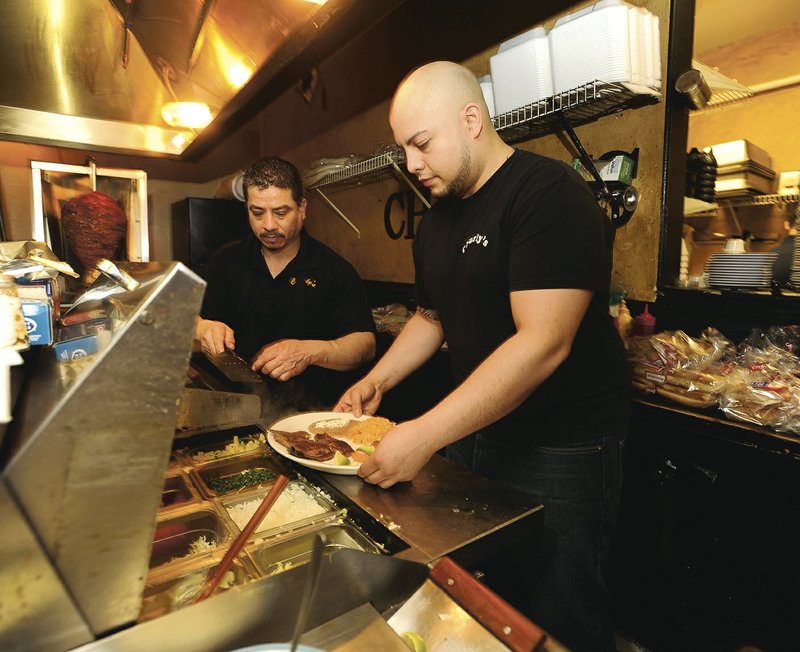 Taquerias sell much more than tacos. Many make tortas, a sandwich on crusty white bread. Others sling a slate of burritos, sopes and other south-of-the-border specialties. But "taqueria" does translate to "taco shop," and tacos are delicious. So why not focus on them?

Many such eateries exist in Northwest Arkansas, but Springdale is the only community to promote a Taco Tour. The city's booster club, Team Springdale, on May 2 debuted the self-guided excursion to several of the city's popular shops. Eight taco shops are listed on the tour, and while that's not nearly all of the potential stops in the region, it's a good start.

Here are a few of the common kinds of tacos served by Springdale taquerias. Not all of the taquerias serve all of them, or offer them at all times, but this is a good beginner’s guide:

Cabeza — Made from roasting the head of a cow, usually consisting of the jowls and snout

Chorizo — A spicy sausage, usually made of pork

Traditional tacos come standard with several ingredients, none of which is lettuce or cheese. Typically, they are served with a choice of meat, chopped onions and cilantro inside a corn tortilla or two. The salsas on the table are pretty standard, too. Salsa roja is the red sauce, a sometimes very spicy condiment, and the salsa verde — “green sauce” — is tomatillo based and much milder. Sometimes, radishes and grilled jalapenos are offered as a garnish but not always. And if you see a shaker full of herbs on your table, it’s oregano or an oregano blend.

• Some taquerias have a condiment bar full of grilled jalapenos, extra diced onions and the like. Ask your server if you can’t locate one.

• The tacos are fairly small, with the tortillas less than six inches in diameter. It might take three or four to satiate a hungry person.

• The cheapest taco I bought was $1.25. The most expensive I saw on a menu was $2.15, and those prices are generally reserved for specialty meats.

• Nearly all of the taquerias sell traditional beverages to wash down the tacos, and a few offer beers or full bars. I’d recommend trying the horchata, a sweet, nonalcoholic, milky drink made with rice and cinnamon.

• The food generally comes pretty fast. Only one of the taquerias took longer than 10 minutes to fill my order, and most took around five minutes.

The idea behind the tour and the rules that govern it are simple. Visitors to any of the eight stops simply eat, take a picture, then post the image on social media using the hashtag #SpringdaleTacoTour. That makes you eligible for prizes.

Or you could just eat the tacos, which is exactly what I did. That's a pretty good prize itself.

In the interest of trying new foods and explaining the experience, I have successfully visited all eight of the taquerias on the tour since the official start date. I gave myself three rules -- and only three. For a point of comparison, I ordered a similar taco at each taqueria. I consumed a carne asada, a taco made of diced, grilled steak, at each. The second idea was to try something different, something out of my comfort zone, maybe even WAY out of my comfort zone. And the final self-imposed rule was that I had to take a couple of very good bites and couldn't drown the taco in the salsas provided as condiments. I had to taste everything. And I'm glad I did. The results are below, with the restaurants listed in alphabetical order, rather than preference:

Carne Asada: The meat here was a bit greasier than many, but that's not always a bad thing. This was the only taco served to me that didn't automatically have cilantro and onions. They were available for the taking at a condiment station, however.

Chorizo, a sausage popular in many Spanish-speaking countries, is a very unsettling orange color. Some chorizo can be found in sausage form, but these were crumbles, and the taco was generously filled. It was spicy, but latent spicy. I'd already walked out of the restaurant before my mouth started to tingle with a pleasant but not overwhelming burn.

The experience: Order at the counter, have a seat, then wait for your tacos, which are delivered to you.

Carne Asada: The steak was diced petitely, and the flavor was good.

Barbacoa is a kind of specialty barbecued meat, featuring long strands of pork. The flavor was not particularly robust, but the texture and appearance reminded me of pulled pork.

The experience: Orders should be placed at the counter, where you receive a number so the kitchen knows where to bring the food. There's a condiment bar here, too. Charly's is the only restaurant where I read explicitly about an option for flour tortillas instead of the standard corn offering. Flour tortillas cost 25 cents extra, the menu stated.

Tripe is made from beef stomach. Served here deep fried, it's light and crispy. There wasn't much taste. Splatted with a bit of mild salsa, the crunch is quite nice, actually. I'll eat anything that's deep fried.

The experience: There's no menu posted outside Don Guero. You just order and hope you get it right. It was also a bit of a chore getting silverware. Don Guero only offers outdoor seating, so most people take them to go. There are about a dozen outdoor seats, within view of the downtown train tracks.

Carne Asada: This came with larger but tender chunks of beef, and grilled onions and jalapenos were provided on the plate.

My waitress told me suadero is pork, but post-meal research shows me it's a cut of beef, one with large chunks. I don't really care which animal it came from. It was delicious, and of all the styles of meat I'd yet to try before starting my Taco Tour, this was my favorite discovery.

The experience: A waitress brought my photographer and me water with lime, soup and an order of duros without prompting. Duros are thin pinwheels made of wheat flour and very snackable. I felt embarrassed for how much food we received considering how little we paid.

Carne Asada: It fit the pattern of many of the other asada tacos -- flavorful beef. The tortilla at El Rey looked homemade, with uneven edges and a slightly less than circular appearance. It was a degree thicker, too, and unlike most taquerias, the tacos came in one tortilla instead of a pair. I enjoyed the tortilla very much.

I mistakenly though cabeza was brains. I learned that's not the case, but not until after I'd already consumed mine. It's made from a roasted head, though, which means the meat includes several of the fatty parts of the face. It was much greasier than I anticipated and seasoned until reddish-orange. Texturally, it's very soft.

The experience: Help yourself to a seat and wait a moment. Half of the taquerias I visited were showing Spanish-language soap operas while I was there, and you can watch along on a large screen at El Rey if you desire.

Carne Asada: The steak was tender and a bit fatty without evidence of gristle, which indicates a good cut of beef.

"Lengua" is the Spanish word for tongue, so you can guess what this taco was filled with. The meat came out in big chunks glistening with fat. The mouthfeel -- sorry for the pun -- was surprisingly soft, the meat a little chewy. For those who don't like eating something that resembles what it looked while still attached to a living animal -- like me, apparently -- lengua can be a bit unsettling. Not all of them, but a few pieces looked like, well, tongue.

The experience: The restaurant is small, and you can get a beer with your order here. It's a full service restaurant, and if you're not taking tacos to go, a waitress will serve you, which is nice.

Carne Asada: This taco was juicy and well flavored.

I could have just as easily selected chicken -- also known as pollo -- as the base taco, especially considering this tour takes place in Springdale, a chicken town. Chicken tacos are familiar, and in this case, the chicken had a nice charred texture without being too dry. As a bonus, I also got an alambre taco, which unlike most taqueria offerings comes with cheese. Alambre tacos also feature grilled steak and peppers.

The experience: It's a surprisingly large restaurant, and like Guanajuato's other location, there's a waitress ready to help you order or a counter where you can order to go. Either way, pay at the counter when you're ready to leave.

Carne Asada: The beef here was crispier on the outside than any other place I sampled. That's not wrong, just different.

The buche taco was served with the pork stomach meat diced into small pieces. It was soft and salty, kind of like eating the fatty ends of bacon if they've not been cooked to a crispy state. I liked it more than I expected.

The experience: Make your order at the counter and have a seat. The restaurant is in a former fast food restaurant -- it was once a Wendy's, I think? -- which means they have drive-through service, too.