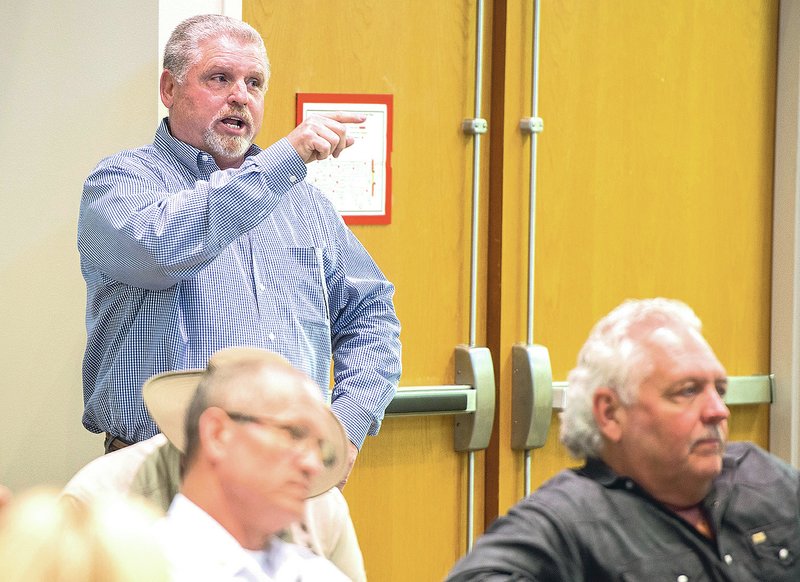 Ray Dotson speaks Monday at the Springdale Civil Service Commission in the City Council meeting room in Springdale. The commission met to consider his complaint against Chief Kathy O’Kelley of the Police Department for releasing a police report concerning the Duggar family. - Photo by Anthony Reyes

SPRINGDALE -- Washington County Juvenile Court ordered the destruction of key evidence in a complaint against the Springdale police chief, the attorney for the Civil Service Commission said Monday.

Chief Kathy O'Kelley was involved in the release of a 2006 police report May 20. The report implicated Josh Duggar, now 27, in the fondling of five victims between 2002 and 2003. Duggar is the oldest son in the 19 Kids and Counting television show by the cable channel TLC, which suspended reruns of the show after the report came out.

Duggar was a Washington-based lobbyist with the conservative Family Research Council. He has since resigned.

The report came before the commission Monday afternoon because former City Council member Ray Dotson filed a complaint against O'Kelley on June 3, saying she shouldn't have released the report and asking the commission "to see if any laws have been broken." The Police Department's copies of the Duggar report were destroyed May 21 by court order of Washington County Juvenile Judge Stacey Zimmerman.

The commission doesn't have the authority to hear a case about whether state law on releasing public records was violated, attorney Thomas N. Kieklak of Springdale advised the body when it met at 3:30 p.m. Monday at city hall. Kieklak told members the local prosecutor, state attorney general and the courts are the usual places to make complaints related to the Freedom of Information Act.

Members said they will consider Kieklak's advice but that Monday's meeting only dealt with matters of procedure. Making any decision on a case that wasn't on the agenda would be improper, said Chairman Eric Harris and member Charles Farmer.

If the commission rejects his advice and proceeds with Dotson's complaint, members will not have a true, verified copy of the report the dispute is all about, Kieklak said after the meeting. The Northwest Arkansas Democrat-Gazette retains its copy of the report and In Touch magazine posted a version on its website, but those would never stand up as evidence in an administrative proceeding, Kieklak said.

Dotson was present Monday and protested to commission members that Kieklak had a conflict of interest, that "we were in litigation in the past." He refused to elaborate, but Kieklak said afterward he represented Lowell in a dispute with Dotson over a stagecoach that went all the way to the state Supreme Court.

Dotson lost that case in 2008. Dotson told reporters after the meeting he would send a formal letter to the city asking Kieklak be excused in this complaint.

Normally, legal counsel for the commission would be city attorney Ernest B. Cate, but he disqualified himself from Dotson's complaint because he advised Kelley on the records release and has defended the release publicly.

The Duggar report was requested through the Freedom of Information Act by In Touch magazine of Englewood Cliffs, N.J,. and by the Northwest Arkansas Democrat-Gazette. Parents Jim Bob and Michelle Duggar said in a June 3 interview with Fox News release of the report on their son was illegal.

"This information was released illegally, so I wonder why all this press isn't going after the system for releasing juvenile records," Duggar said on The Kelly File to interviewer Megyn Kelly. "That is a huge story."

The Duggar's view is disputed by Springdale's city attorney, mayor, the Arkansas Press Association and attorneys with expertise in public-document cases involving the state's Freedom of Information Act.

"The city will not dignify suggestions of misconduct in this matter by Chief O'Kelley with any comment beyond labeling them as outrageous and categorically false," Mayor Doug Sprouse said Monday. "Chief O'Kelley is a dedicated public servant who career in law enforcement has been committed to duty and the adherence to the law."

The release came only after consultation and upon the advice of the city attorney, the Arkansas Municipal League, the Arkansas State Police, and the Washington County assistant prosecutor for juvenile cases, Sprouse said. The Duggar family was also given notice of the request, he said.

Zimmerman ordered police to destroy all copies of the 2006 report in their possession in a court order May 21, the day after it was released. The department obeyed the order that day, a police spokesman said then.

"The police report contains information, which may directly or indirectly identify the movant as a victim of a sex crime, and the movant is a minor child," Zimmerman's order read. A "movant" is a person requesting court action. The purpose of the order was to protect the minor, the court order read.

Whether Zimmerman could order the destruction of records was questioned by Tom Larimer, executive director of the Arkansas Press Association. A spokesman for Zimmerman's office said Monday the judge wouldn't be able to comment on a case in her court.

"It's a giant leap from a record being sealed, which has happened before, to destroying one," said Larimer said Wednesday. "I'd be concerned about possible illegality. What good can come from destroying a public record so that it can never be used by anyone, ever?"

Brandon Cate of Springdale, an attorney who specializes in public record law, agreed Monday. The city attorney and Brandon Cate aren't related, Ernest Cate confirmed Wednesday. "The Springdale Police Department report is a law enforcement record, not a court record," Brandon Cate said. "I do not believe that Judge Zimmerman has the authority to order the destruction of the police report belonging to an entity outside the court system, nor do I believe that the Springdale Police Department had any alternative but to release the redacted report pursuant to the Freedom of Information Act."

Brandon Cate reviewed Zimmerman's order and two supplemental orders the judge issued since then to elaborate on her ruling. "None of the Arkansas statutes cited in her orders provide the court with the authority to order the destruction of the police report," he said.

"If anything, it was the court that revealed the identity of a victim when the court wrote in its May 21 order that one of the victims remains a minor today," Brandon Cate said. "I understand that this has allowed the identification of one of the Duggar children."

Doug Thompson can be reached by email at [email protected]