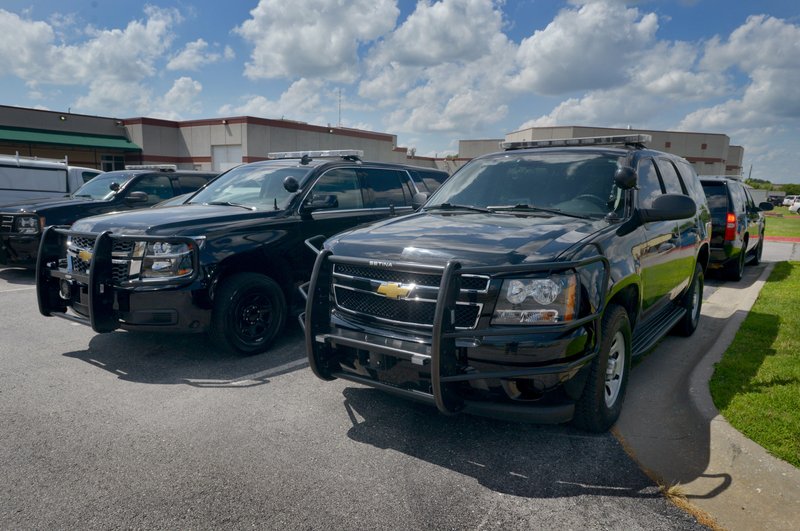 New Chevrolet Tahoe patrol vehicles sit on the lot at the Benton County Sheriff’s Office in Bentonville. The Sheriff’s Office introduced a black Chevrolet Tahoe marked with black and gray when Sheriff Kelley Cradduck was elected in 2012. The markings are subdued, and Cradduck said there is an advantage to having vehicles that aren’t covered in police lights and decals: “The element of surprise keeps everybody safer."

Many police vehicles in Northwest Arkansas don't fit the image of the traditional squad car. They aren't all black or white. A few don't carry police lights or traditional markings. Some aren't cars, but sport utility vehicles. 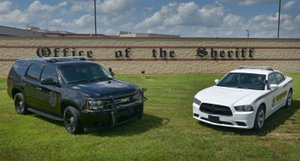 Photo by Ben Goff
A new Chevrolet Tahoe (left) and an older Dodge Charger sit in front of the Benton County Sheriff’s Office in Bentonville. The Sheriff’s Office might have the widest variety of vehicles.

Patrol vehicles are often a single color, depending on the city, but an odd assortment of vehicles is used for getting supervisors around town. Police also use unmarked vehicles for a variety of reasons.

• Bentonville Police Department: There are 69 vehicles in patrol and 69 officers in the patrol division. Officers are assigned a vehicle. Keeping the same sport utility vehicle or car each day allows for longevity because the vehicles aren’t running 24 hours a day seven days a week, a spokesman said. Patrol vehicles are mostly white Chevrolet Tahoes marked in blue. Dodge Durangos and Crown Victorias in the fleet are being phased out.

• Fayetteville Police Department: There are about 25 Chevrolet Tahoes and seven Ford Crown Victorias in the department’s vehicle pool. The department tried Dodge Chargers but found the ground clearance too low for hilly streets. Cars are leased from the city of Fayetteville, which takes care of maintenance and car purchases. Officers rotate through a fleet of cars. Investigators drive unmarked Ford Tauruses, Ford Fusions and there are some hybrid Toyota Camrys in the group. Patrol vehicles are black and white Chevrolet Tahoes or older white Crown Victorias marked with blue and gold.

• Springdale Police Department: There are 152 vehicles in the Springdale Police Department fleet and 143 officers. There are 84 vehicles assigned to patrol and four to traffic. Marked vehicles are gray. Newer vehicles in the fleet are marked with black and gold logo but some still sport the blue and gold logo and stripes that are being phased out. Patrol vehicles could be gray Chevrolet Tahoes, Ford Crown Victorias, Ford Interceptors, Dodge Chargers or Ford Fusions.

• Washington County Sheriff’s Office: There are 157 total vehicles with 97 assigned to individuals in patrol, criminal investigation or administration. The sheriff’s office runs the Washington County Detention center and another 60 vehicles are assigned there. Patrol vehicles could be white Chevrolet Tahoes or Ford Crown Victorias marked with green and gold and a sheriff’s star. No new vehicle purchases have been approved this year, but eight Chevrolet Tahoes were purchased in fall 2014. There are 19 unmarked vehicles in the fleet.

They all have a purpose, officials say.

The Benton County Sheriff's Office might have the widest variety of vehicles.

"We've got a bag of Skittles out there in the parking lot," Sheriff Kelley Cradduck said.

The Sheriff's Office introduced a black Chevrolet Tahoe marked with black and gray when Cradduck was elected in 2012. The markings are subdued, Cradduck said. There is an advantage to having vehicles that aren't covered in police lights and decals, he said.

"The element of surprise keeps everybody safer," he said.

People with bad intentions always are on the lookout for deputies, Cradduck said. If deputies are sent to look for a missing person or to a hostage situation they might not want to be recognized immediately, he said. Unmarked cars are used for observation, but the dark county-owned vehicles help Sheriff's Office vehicles blend in until they turn on their lights.

"They light up like a Christmas tree," Cradduck said.

The Sheriff's Office has purchased 37 Tahoes since 2012, said patrol Lt. Randy Allsup. There are about 40 Dodge Chargers purchased under the last administration that are white with a black and gold insignia.

"We're going black," Allsup said. "We're not going to go back and change all the old vehicles. They're still good cars."

Repainting the white cars black would be expensive, Allsup said. Even remarking a car with a new logo could cost $800 or more, he said.

Outside of patrol there's a smorgasbord of cars, sport utility vehicles and trucks driven for police work, he said.

Investigators might drive a Ford Taurus. Unmarked Dodge Chargers are used to intercept drugs. A Chevrolet Caprice is on order for the Sheriff's Office to test.

Benton County also uses vehicles seized from drug arrests. Some are outfitted with lights and are driven by administrators such as the sheriff. Others are used in crime suppression, surveillance and gang units, Cradduck said. Those cars aren't marked. None of the seized vehicles were painted before they were put into service.

Allsup estimates there's about seven unmarked seized vehicles on patrol, but the number is fluid.

"Once a car gets 'made' they can't use it anymore," Allsup said.

Department supervisors or detectives might drive cars that are the same model as patrol and are outfitted with police lights, but have no markings on the side. Police use a variety of vehicles for undercover or surveillance work.

Springdale uses seized vehicles for undercover work, said Lt. Scott Lewis, police spokesman. Some are painted, some have the wheels replaced, but the vehicles aren't usually left "as is." Patrol vehicles in Springdale are a single color -- gray.

Investigators in Fayetteville may drive an unmarked Ford Fusion or a Ford Taurus, said Craig Stout, spokesman. There are hybrid and propane run vehicles in the fleet.

Patrol vehicles, though, need to be recognizable, spokesmen for Northwest Arkansas police and sheriff's offices said. Police studies have recommended traffic units be well lit and highly reflective -- regardless of vehicle color -- for the safety of officers on a traffic stop.

A well-marked vehicle has good emergency lighting and has reflectors built into markings so it can be seen at night, according to a traffic safety study by the International Association of Chiefs of Police.

Most departments in Northwest Arkansas use single-color patrol vehicles.

"We have no plans in the foreseeable future to change to a another color," she said.

There is a simple reason for that.

"We learned that black and whites were a little harder to sell," Hubbard said.

Part of the reason patrol cars are well-marked is to avoid accidents, Hubbard said.

If a person sees an emergency vehicle driving down any undivided road, state law requires them to stop -- even if the vehicle is going in the opposite direction.

An officer might have to drive into oncoming traffic to get around the backed up turn lane on during Bentonville's lunch hour traffic at Central and Walton, Hubbard said.

"Wait until it's their emergency and we can't get through traffic," he said. "Everybody just has to listen to that siren."

Fayetteville is an exception to the one-color car rule. The department is returning to black and white vehicles by phasing in Chevrolet Tahoes for traffic patrol. Older Crown Victorias are painted all white with blue and gold markings on the side.

All these looks at area police departments are being phased in, partly because the primary police vehicle for many agencies is no longer made.