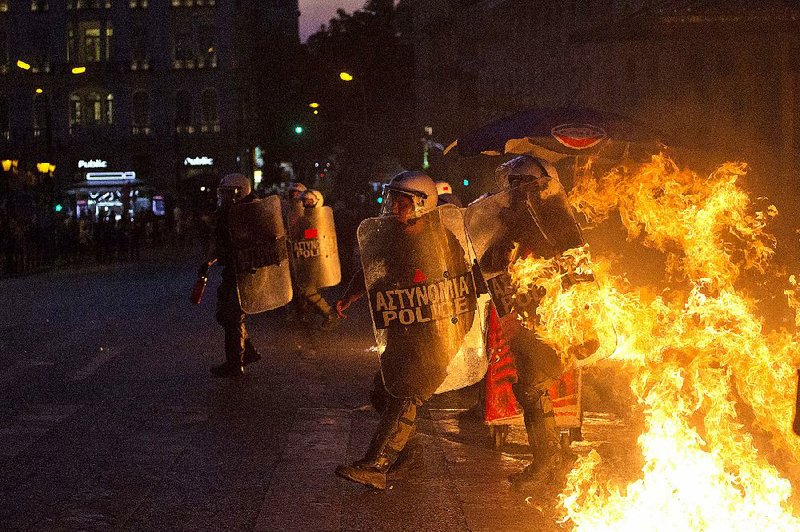 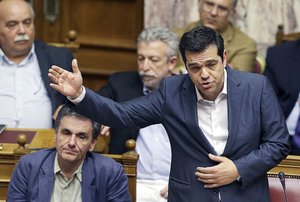 Photo by THANASSIS STAVRAKIS / AP
Greek Prime Minister Alexis Tsipras speaks to parliament Wednesday in Athens before the vote on an austerity measure. At left is Finance Minister Euclid Tsakalotos. Though the bill was approved, prominent members of Tsipras’ leftist Syriza party dissented. 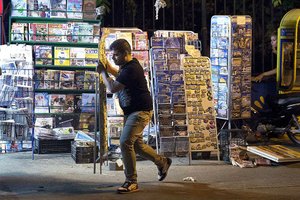 Photo by PETROS GIANNAKOURIS / AP
A Greek merchant gathers in his goods Wednesday at a kiosk in Athens during clashes between riot police and protesters.

The bill, which imposes sweeping tax increases and spending cuts, fueled anger in the governing Syriza party and led to opposition against Tsipras.

The prime minister has argued that the deal forged after a marathon weekend eurozone summit was the best he could do to prevent Greece from being forced to exit the group of nations that uses the euro currency.

Under the deal, Athens had to approve the legislation by early today or face certain default.

The bill was approved with 229 votes in favor, 64 against and six abstentions. It won the support of three pro-European opposition parties.

Prominent Syriza party members were among the 38 dissenters, including Energy Minister Panagiotis Lafazanis and former Finance Minister Yanis Varoufakis, whom many blame for exacerbating tensions with Greece's creditors during five months of negotiations.

The vote happened after an anti-austerity demonstration by about 12,000 protesters outside parliament degenerated into violence as the debate was getting underway Wednesday night. Riot police fired tear gas at youths who hurled firebombs for about an hour before the clashes died down.

In addition to the protest outside parliament, civil servants protested the austerity measures with a 24-hour strike that disrupted public transport and shut down state-run services across the country.

The bill was the first step Greece must take in order to begin negotiations with creditors on a new bailout -- its third in five years -- of about 85 billion euros in loans over three years. Under the current exchange rate, 1 euro equals about $1.09.

The vote puts the onus on the European Central Bank and other eurozone governments to deploy more emergency funds that will help Greek banks gradually reopen and repair the country's battered coffers.

The central bank's governing council is to meet in Frankfurt later today, and Germany's parliament will vote Friday on whether to start bailout negotiations to help Greece cover its debts and pay pensions and salaries.

Critics of the bailout deal's terms argued that Greeks could not face any further cuts after six years of recession, during which poverty and unemployment skyrocketed and wiped out a quarter of the country's economy.

Tsipras has acknowledged the agreement reached with creditors was far from what he wanted and trampled on his pre-election promises of repealing austerity. But he insisted the alternative would have been far worse for the country.

"We had a very specific choice: A deal we largely disagreed with, or a chaotic default," he told parliament ahead of the vote.

Tsipras had urged Syriza members to back the bill despite having urged voters to reject earlier, milder creditor demands in a July 5 referendum. Greeks voted overwhelmingly to reject those proposals after Tsipras said doing so might lead to better terms from creditors.

Finance Minister Euclid Tsakalotos, who took over from Varoufakis the day after the referendum, said the deal Greece reached with its creditors Monday was the only possible choice.

"I must tell you, that Monday morning at 9:30, it was the most difficult day of my life. It was a decision that will weigh on me for the rest of my life," Tsakalotos said.

"I don't know if we did the right thing. But I know we did something with the sense that we had no choice. Nothing was certain and nothing is," he told parliament.

But Lafazanis said the deal went against the wishes of Greek citizens.

"The Greek people did not cast their vote in the referendum for us to approve another austerity memorandum," the energy minister, one of Syriza's leftist hard-liners, said. "I will not vote for a third [bailout] memorandum. With it, the country cannot move forward. It will be destroyed."

Other high-ranking dissenters included Alternate Finance Minister Nadia Valavani, who resigned from her post earlier Wednesday, saying she could not vote in favor of the bill.

In a letter sent to Tsipras on Monday and released by the finance ministry Wednesday, Valavani said she believed "dominant circles in Germany," one of Greece's top creditors, were intent on "the full humiliation of the government and the country."

Parliament speaker Zoe Konstantopoulou, a prominent Syriza member, slammed the deal as a product of blackmail, calling it a "crime against humanity" and "social genocide."

Today's vote came after more than two weeks of capital controls, with Greek banks and the stock exchange shut since June 29 and ATM cash withdrawals limited to 60 euros per day.

Negotiations on the new bailout will take an estimated four weeks, leaving European finance ministers scrambling to find ways to get Athens some money sooner.

The European Commission has proposed giving Greece 7 billion euros in loans from a special fund overseen by all 28 European Union nations so it can pay its coming debts. The loan would be made pending the start of a full bailout program, but it faces resistance from Britain, a non-eurozone member of the EU.

The International Monetary Fund, which was involved with Greece's previous two bailouts and also will play a role in the third, has long argued the country's debt is too high and that any deal must include debt relief.

Greece also has insisted on debt relief, which has been strongly opposed by Germany and others.

In a report released late Tuesday, the IMF said Greece's debt was now "highly unsustainable" and would reach "close to 200 percent of GDP in the next two years" without a combination of a bailout and debt relief.

On Wednesday, the European Union's executive commission echoed that analysis, saying there are "serious concerns" about the sustainability of Greece's debt because of its worsening economy.

Information for this article was contributed by Elena Becatoros, Derek Gatopoulos, Raf Casert and Frank Jordans of The Associated Press; by Eleni Chrepa, Nikos Chrysoloras, Matthew Campbell and Antonis Galanopoulos of Bloomberg News; and by Henry Chu and Dody Tsiantar of the Los Angeles Times.