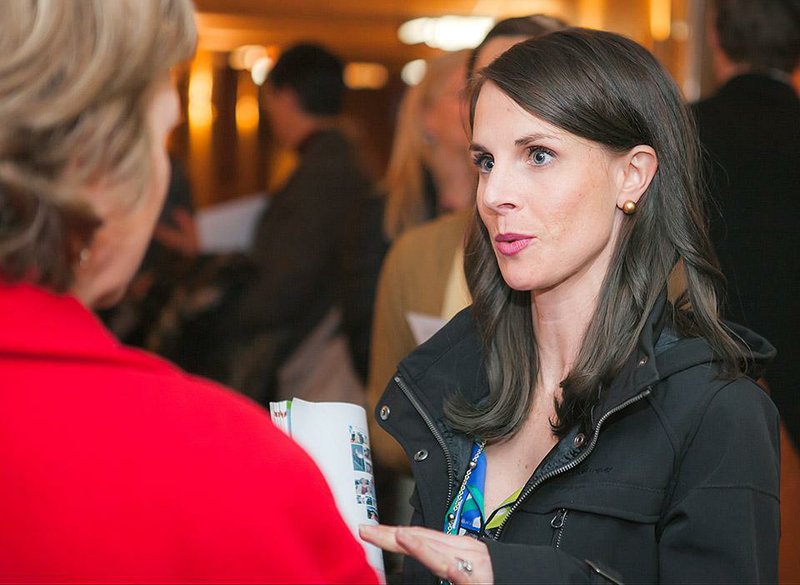 Special to the Democrat-Gazette/Daniel Moody Photos Dr. Christie Beck chats Jan. 8 with Arkansans who attended a showing of Forks Over Knives at Riverdale 10 Cinemas for Kickstart Your Health LIttle Rock, a campaign to encourage residents to adopt a plant-based diet that includes a 31-day introduction to veganism. Designed the the Physicians Committee for Responsible Medicine, the campaign is endorsed by UAMS, ADH, city of Little Rock and Baptist Health Medical Center.

Editor's note: This is the first in a series of articles about Kickstart Your Health Little Rock, a campaign to encourage residents to adopt a plant-based diet. Developed by the Physicians Committee for Responsible Medicine, the program is endorsed by the University of Arkansas for Medical Sciences, the Arkansas Department of Health, Baptist Health Medical Center and the city of Little Rock.

We frequent the movies to escape (Taken 3) or count ourselves part of a cultural conversation (Selma), but rarely as Step One in a lifestyle project. But that's just what several hundred central Arkansans did Jan. 8 at a two-screen viewing of Forks Over Knives, the Lee Fulkerson documentary cri de coeur for veganism.

What's veganism? Certainly there are different paths, but all vegans reject the consumption of animal flesh, from ungulate to crustacean, as well as animal byproducts such as eggs and dairy (which includes cheese and butter) and gelatin. A more ascetic strain of veganism rejects honey, and ethical veganism concerns the treatment of animals regardless of intent.

For the purposes of the film and the project Kickstart Your Health Little Rock, veganism refers only to the diet.

Over the course of nearly two hours, filmmaker Fulkerson explores the case for veganism through the professional testimonies of two doctors, the lives of a handful of converts, a fairly steady stream of scientific evidence (mostly correlative) and damning data ("the livestock industry is a greater contributor to global warming than the transportation industry," according to a United Nations report), as well as Fulkerson's own 12-week gustatory about-face a la Morgan Spurlock.

The movie opens with Fulkerson visiting the home offices of a young, married pair of physicians, who run a workup on Fulkerson that finds quite elevated cholesterol and something called C-reactive proteins (CRP). The federal Centers for Disease Control and Prevention sets the range for average risk of cardiovascular disease vis-a-vis CRP level at between 1.5 and 3.0 mg/L -- Fulkerson initially measures 6.0.

By the end of his 12 weeks -- and the film -- he shows an astonishing drop, down to 2.8 mg/L. He does this without pharmacology or an exercise regimen, and he's noticeably leaner.

In fact, everyone in the film is leaner, lean or skinny.

So were the three proselytes who spoke at the screening -- Neal Barnard of Washington and Christie and Jason Beck of Little Rock, all physicians.

Barnard, founding president of the Physicians Committee for Responsible Medicine, flew in to help the Becks and others, including the mayor's office, generate some momentum for a campaign to encourage city residents to take a stab at veganism beginning with an introductory program. On Feb. 1, interested people plus one plucky reporter will begin a 21-day vegan pledge called Kickstart Your Health Little Rock.

A link to registration is at KickstartLittleRock.org.

media support are directed by the Physicians Committee for Responsible Medicine, and the Becks will be chairmen (though there's no formal board or task force -- yet).

"It's widely known that Bill Clinton adopted a vegan diet to protect his heart," Barnard says, "and he's looked better than he has in years. Al Gore followed suit, Ellen DeGeneres, many, many top athletes, but for physicians there's been great eagerness to learn, 'How do you actually use this in a clinical setting?'"

In the movie, Fulkerson's doctor goes food shopping with him, whetting his appetite with delicious vegan possibilities. Do doctors need to take their patients to the grocery store?

Barnard has given grand rounds (formal lectures) at each of the major area hospitals, telling their staffs "that they don't have to do that. You don't have to spend an hour with each patient. You can spend seven minutes: 'You have diabetes. It's not in good control. Now, meet with a dietitian.'"

The Becks lost a combined 85 pounds after they became vegans in 2008. Dr. Jason Beck's father, Barry, acceded to the diet and eventually discontinued his high blood pressure and diabetes medications (under medical supervision) and lost 30 pounds.

Appearing svelte is an inevitability, it seems, as anyone who has seen former President Clinton can picture (Clinton adopted a vegan diet sometime after his quadruple bypass surgery in 2004).

Christie Beck is a certified Food for Life cooking teacher who'll begin free classes on the Baptist Health campus Friday. Details are on KickstartLittleRock.org under Events.

Whole Foods Market Little Rock has a healthful eating specialist, Sarah Fulton-Koerbling, who can offer tips, recipes and store tours to folks at their convenience. The store also offers plant-based cooking classes, although the most recent sign-up is over. And KickstartLittleRock.org enrollees will get weekly and daily emails that will, among other things, feature meal plans with recipes.

Beck says there's a learning curve to veganism that requires recipe study and practice, but she hasn't so much as cut animal out of their diet so much as gained mastery over a great many new ingredients.

"I think it [meat eating] is going to be more like tobacco. Where we look back and go, 'Remember when we thought maybe tobacco was bad, but all the companies were telling us it was OK and it was even included in military meals, and you smoked in hospitals ... ?' I hope that the war on tobacco and the health crisis that tobacco has caused is maybe the way we look back at the food crisis.

"I hope we can look back and say, 'I can't believe we ever questioned whether or not it was safe to give kids hot dogs in schools.'"

For more information about the Becks' effort, visit KickstartLittleRock.org or call the Physicians Committee for Responsible Medicine, (202) 686-2210. Sarah Fulton-Koerbling or Laura Chambers can be reached at Whole Foods Market, (501) 312-2326.