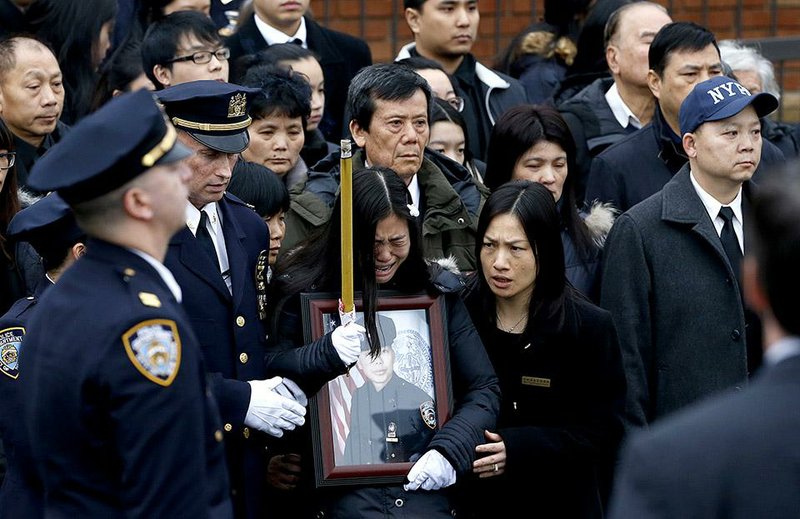 Pei Xia Chen, center, widow of New York City police officer Wenjian Liu, holds a photograph of her husband following funeral services for him at Aievoli Funeral Home, Sunday, Jan. 4, 2015, in the Brooklyn borough of New York. Liu and his partner, officer Rafael Ramos, were killed Dec. 20 as they sat in their patrol car on a Brooklyn street. The shooter, Ismaaiyl Brinsley, later killed himself. (AP Photo/Julio Cortez)

NEW YORK -- For the second time in just over a week, a sea of pressed blue uniforms filled some of New York's streets as Mayor Bill de Blasio delivered a eulogy for a police officer killed because of the badge he wore.

And for the second time, hundreds of police officers, crowded together in the rain outside a funeral home in southern Brooklyn, turned their backs to television screens showing the mayor's remarks.

The silent show of disrespect came even after a request from the police commissioner, William Bratton, that officers not let their anger with the mayor distract from the funeral and the grieving family. And it came despite a meeting convened by de Blasio last week with police union officials in an effort to defuse the tension.

On Sunday, the mayor praised the slain officer, Wenjian Liu, as an example of a "brave" and "kind" New Yorker who came to the city from China and followed his dream to join the Police Department.

"We had lost a man who had embodied our city's most cherished values," the mayor said. "Detective Liu's dream was clear, and it was a noble one: to don the blue uniform, to pin on the badge, to dedicate himself to protecting and serving the city he loved."

As he spoke, police officers from New York as well as some of those who joined them in mourning from around the country turned their backs.

Once de Blasio finished his remarks and Bratton started speaking, nearly all the officers who had their backs to the mayor turned around again.

Liu and Ramos, killed Dec. 20 and posthumously promoted to detective, were shot in their parked patrol car in Brooklyn by a man who had announced on social media his intention to kill police officers. Their murders shook a city already roiled by weeks of protests over policing practices and devastated an already demoralized Police Department.

On Sunday, thousands of New York police officers mixed in the closed streets around the Aievoli Funeral Home in southern Brooklyn with throngs from the Chinese-American community to which Liu belonged.

The director of the FBI, James Comey, spoke during the ceremony, which began shortly after 11 a.m., as did Liu's father, Wei Tang Liu, who tearfully delivered his remarks.

"No words can express my sadness," Liu said, in Chinese. "He called me every day before he finished work, to assure me that he is safe, and to tell me, 'Dad, I'm coming home today, you can stop worrying now.'"

Wenjian Liu, known as Joe to many of his colleagues in the 84th Precinct where he last worked, came with his parents to the United States from China at the age of 12. An only child, he studied in the city's public schools. His father worked in a garment factory.

As an adult, Liu was proud of his work in the Police Department, his family said. He enjoyed fishing, they said, and shared what he caught from waterways in and around the city with relatives and friends.

The funeral was believed to be the city's first for a Chinese-American officer killed in the line of duty, prompting the increasingly diverse Police Department to draw on its growing knowledge of ceremonial rites and adapt its own traditions to the desires of the grieving family.

"Now our cops are from everywhere," Bratton said in his remarks. "Every police car holds a little bit of this city."

The formal police ceremony, with its choreography of bagpipes and motorcycles, pallbearers and helicopter flyover, followed a private Chinese ceremony led by Buddhist monks in a smaller room, where offerings were made Saturday and again Sunday morning under a photograph of Liu.

Liu's funeral had been delayed until Sunday so that family members in China could obtain travel documents to come to New York.

In that time, besides a short statement read by his widow, Pei Xia Chen, shortly after the shooting, Liu's family had made no public statements.

But during his funeral, his wife, father and other relatives delivered moving tributes to Liu, describing the love he had for his family and for his badge.

Chen spoke through tears, standing before a portrait of her husband.

"To me, he is my soul mate," she said. "Wenjian is an incredible husband, son, co-worker and friend. My best friend."

He took pride in working for the Police Department, she said, ending by addressing the thousands of officers who offered condolences and support.

"I thank you," she said. "My extended family, my family in blue."

Before the procession moved to the cemetery, a flag was folded by white-gloved officers and silently handed to Chen.

Information for this article was contributed by Jia Guo, Nate Schweber and Jeffrey E. Singer of The New York Times.