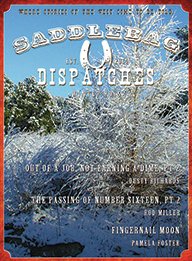 Come and gather around the campfire, "where stories of the West come to be told."

"If you like stories of the Old West, you've come to the right place," reads the homepage, called "Homestead."

"But we don't just tell stories of the Old West," the site continued. "If your tale takes place west of Mississippi and has the spirit of the Old West in it -- even if it involves pickups and highways instead of horses and dusty trails ... As long as it speaks to rugged individualism and a frontier way of thinking, it belongs here."

"This is the West," said Dusty Richards of Springdale, an award-winning Western writer and editor-in-chief for the e-magazine.

Saddlebag Dispatches came about when "Dusty and I put our heads together one day at Atlanta Bread Co. in Fayetteville," said Casey Cowan, co-founder of the local Oghma Media and art director for Saddlebag Dispatches. Richards met Cowan through the Northwest Arkansas Writers Workshop and signed a five-book deal soon after Oghma was started in 2013, Cowan said.

Cowan and Patty Stith, a local author who writes contemporary romance under the pseudonym Claire Croxton, and a long-time friend of Richards, started Oghma in 2013 to promote authors, artists and musicians, Cowan continued. "In late May of last year, we made the decision to enter the publishing arena, dubbing ourselves a 'renaissance' press," he said.

"And, let me say, when you're a start-up publisher and have one of the best and most prolific writers in the country talking you up to everybody he knows, it helps business a lot," Cowan said of Richards.

Eight books were released by Oghma in 2014, with two entered in consideration for Pulitzer Prizes. Fifty-two more books are planned for 2015, and 130 books currently under contract. The company works with many renowned local authors of Arkansas, Oklahoma and Missouri -- including Richards, Velda Brotherton, Pamela Foster, M.G. Miller, K.D. McCrite, J.B. Hogan and Reader's Digest Grand Prize winner John T. Biggs -- and others from across the country. Soon, Oghma will release a pulp/noir e-magazine counterpart, "Into The Shadows."

During one of their many long conversations, Cowan and Richards discussed how to revive public interest in Westerns, Cowan related. Richards revealed his long-time dream to start a magazine dedicated to promoting Western stories and Western authors. Cowan loved the idea, but didn't have the funds.

"'Why does it have to be printed?' Dusty asked. 'We could do an online magazine, fill it with great stories from top-quality authors, and use it -- not just as a promotion tool and revenue stream, but as a tool to pull people back toward the Western genre at a time that it seems like most publishers are abandoning it,'" Cowan revealed Dusty's thoughts.

"It's a free e-magazine," Richards explained. "There's no print, no postage, no money spent. It's good stuff for free."

In time, Richards expects sponsorship and advertising aimed at the magazine's audience to support the endeavour. Future plans include listings of Western-themed events, such as the local Rodeo of the Ozarks; book reviews; and a database of Western writers.

The first issue of Saddlebag Dispatches published in the fall, with the second released just last week.

The e-magazine currently features installments of two serial novels -- "Out of Work and Nothing to Do" by Richards, and "The Passing of Number 16" by Rod Miller -- and regular columns by historians Velda Brotherton and J.B. Hogan, American Indian expert Biggs and cowboy poet Rod Miller. The issues also include nonfiction pieces -- such as a look at a mining operation by Nancy Burgess, and construction of adobe shelters in the old Southwest and the Gatling gun by Gordon Rottman.

"The caliber of the guns on the frontier were not the same as guns today," Richards said. "It's always been said, if (U.S. Gen. George) Custer took two Gatling guns with him, he would have won Little Big Horn."

The current winter issue features a photographic layout about the Canyonlands (Utah) National Park by Biggs and a feature on local American Indian artist Dawne Michelle Smith. The spring issue will include the final installments of the serials, and the opening of a new series by Spur award-winner Cotton Smith; also, short stories from Darrell Sparkman, Elaine Coleman, Matt Bruin and Biggs; and an interview and photo spread with Dave Bright, the Fayetteville musician leading a revival of classic country music.

As editor-in-chief, Richards recruits new writers as well as promotes and advertises Saddlebag Dispatches, Cowan explained. Richards calls on his friends and fellow award winners from the Western Writers of America to submit their work. Richards has been a member of the Western Writers since the early days of his career, which gave him two of its top awards -- Spur awards -- for his writing. In turn, Richards has served in the leadership of the organization and helped a few more generations of greenhorn writers.

"They push Western writing," Richards said of the members of the organization. "Anybody [who] wants to write a book wouldn't be anywhere without Western Writers. I've talked this magazine up until I'm blue in the face. It's nice to promote something worthwhile."

LAURINDA JOENKS IS A FEATURES REPORTER AT THE MORNING NEWS AND HAS LIVED IN SPRINGDALE SINCE 1990.