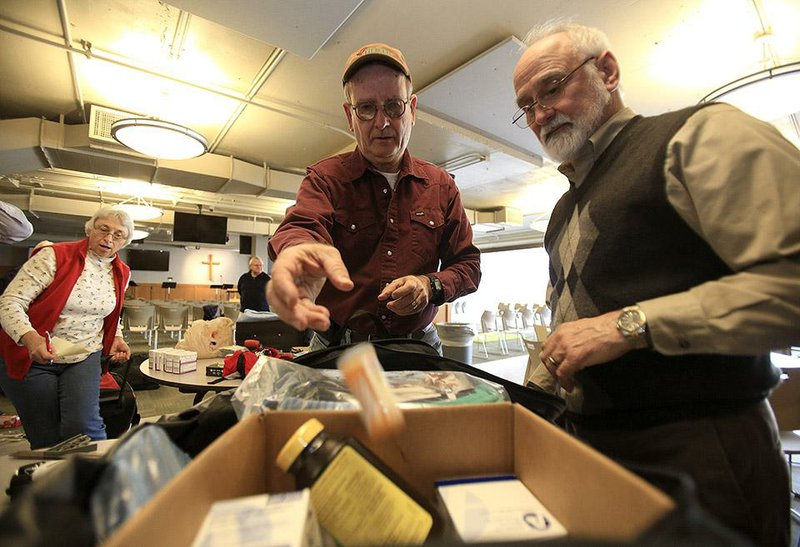 The Rev. Chris Cooper (right) and Tom Baxter (center) pack supplies Wednesday for a short-term mission trip, while Betty Cooper (left) works on another bag. The medicine, vitamins and other supplies are destined for Cuba and should arrive there Friday. - Photo by Staton Breidenthal

Days after Washington and Havana announced a thaw in their half-century long cold war, a group of Arkansans is traveling to Cuba to forge closer ties between Methodists in the two nations. 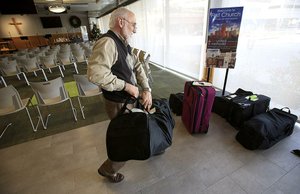 Photo by Staton Breidenthal
The Rev. Chris Cooper, pastor of First United Methodist Church in Little Rock, places a duffel bag near other luggage Wednesday afternoon as he prepares for a short-term mission trip. Cooper is one of a dozen Arkansas Methodists traveling to Cuba.

The dozen volunteers are scheduled to fly from Little Rock to Miami today. Friday, they'll board a charter flight and head for Cuba's capital.

The short-term missions team will help build housing at the Evangelical Methodist Seminary there. Team members also will attend worship services during their stay.

The trip was scheduled before the diplomatic breakthrough; this is the first Arkansas Mission Team to Cuba, church officials say.

"We're going strictly as servants to the members of the Methodist community in Havana," said Mary Cantwell, a member of Pulaski Heights United Methodist Church in Little Rock.

Ideology and controversy won't be on the agenda.

"We respect the cultural views of whatever country we're visiting. We've been asked not to talk history [or] politics," Cantwell said.

Cuba has about 11 million citizens; about 45,000 of them are affiliated with the Methodist Church in Cuba, according to the church's website (www.imecu.com).

Pictures posted online show baptisms by immersion in the turquoise waters of the Caribbean and jam-packed sanctuaries, cooled by electric fans.

A Cuban pastor, Aramis Cosio Nunez of Pinar del Rio, traveled to Arkansas a year ago to preach and share the news about his nation's Methodist community; he told people that the church is alive and growing.

By the time he left, people were eager to witness things for themselves.

Most worshippers are young, she said, and they have healthy attention spans. A typical service can last up to three hours. When no church building is available, believers gather at house churches.

Sundays aren't as segregated there.

"I see no racism. They're all colors celebrating, worshiping, [doing] everything together," Fullerton said. "You'd only like to hope that that would be something we could learn from."

Short-term missionaries aren't allowed to sample any of the world-famous rum; Fullerton said participants agree in writing not to drink. Cigars are also off-limits.

Since it's January, the average high temperature is 80 degrees. Volunteers do a variety of tasks -- everything from sanding and painting to digging holes and handling concrete.

Instead of staying in hotels, they'll sleep in church buildings. Instead of dining in restaurants, they'll share simple meals with fellow Methodists.

With the departure date nearing, Fullerton said she's looking forward to the adventure.

"I'm very passionate about Cuba and the people of Cuba," she said. "I hope and expect that this Arkansas Methodist ... mission [trip] will be an annual thing."

The Rev. Chris Cooper, pastor of First United Methodist Church in Little Rock, said he's been on mission trips to Guatemala and Mexico, but Cuba will be a new experience.

"It seems like the country's opening up now. It'll be an exciting time," he said.

But the goal is also to build relationships. Cooper says the aim is to "truly aid the indigenous people and also change our hearts."