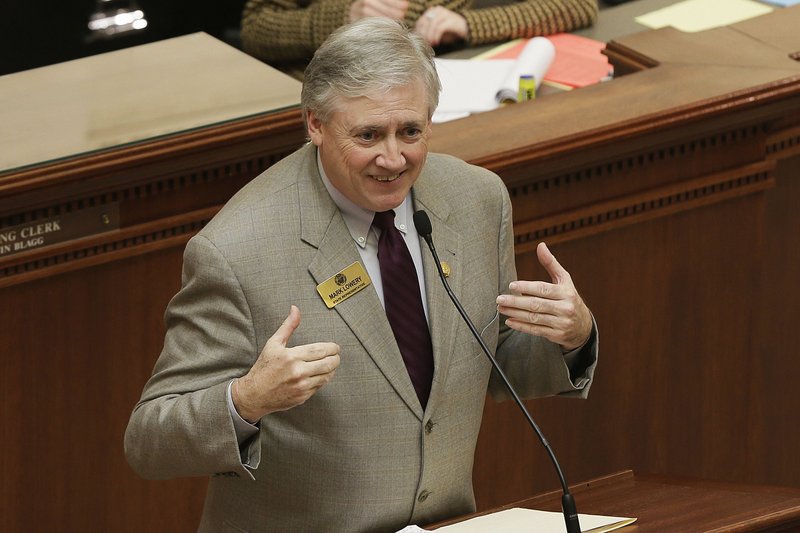 Legislation that would ban a type of abortion not currently available in Arkansas won approval Tuesday from the state Senate, as a bill that would change the requirements for creating a school district by detaching territory from an existing district narrowly failed to clear the House.

A day after the House and Senate didn't convene because sleet iced roadways, the chambers met for the 37th day of this year's regular session. Legislative leaders are aiming to recess the session by April 10 and adjourn by May 8.

The Senate also approved a bill to expand the Arkansas Racing Commission, and a House committee endorsed a bill aimed at giving cities and counties control over whether to add fluoride to the water supply, but it rejected a bill to end enrollment in the private-option program.

In a 28-5 vote, the Senate approved House Bill 1076 by Rep. Julie Mayberry, R-Hensley, which would require a physician to be in the room during a chemical abortion and bans telemedicine abortions.

The procedure that is sometimes called a webcam abortion was already unavailable in Arkansas, said Mayberry and Sen. Missy Irvin, R-Mountain View.

Supporters of the bill said they want a doctor present in case of complications with a chemical abortion, but opponents said it would restrict access to a medication abortion that's both safe and legal.

HB1076 goes back to the House to consider a Senate-approved amendment to the measure.

On Monday, the House Public Health, Welfare and Labor Committee endorsed SB53 by Irvin -- a bill identical to Mayberry's HB1076 -- and sent it to the House for further consideration.

In other action, the Senate voted unanimously to approve SB314 by Sen. David Burnett, D-Osceola, to expand the racing commission from five to seven members. The bill goes to the House.

Burnett told senators that the racing commission's responsibilities have increased significantly with the growth of the electronic games of skill offered at Oaklawn Park in Hot Springs and Southland Park Gaming and Racing in West Memphis, but the commission is smaller than similar panels in other Southern states.

In a 34-0 vote, the Senate passed SB227 by Irvin to make using a motor vehicle or motorcycle designed, equipped or marked with "an emblem, logo, marking, decal, insignia or design" to resemble a vehicle or motorcycle belonging to a law enforcement officer an offense of first-degree criminal impersonation.

The bill would allow a circuit or district judge in whose court a relevant charge is filed to immediately order the removal of any emblems, logos, markings, decals, insignia or designs that are the subject of that criminal charge.

Irvin said the bill, if enacted, could apply to a candidate running for county sheriff.

The bill now goes to the House.

The Senate sent to the governor HB1163 by Rep. Nate Bell, R-Mena, which would prohibit public employers from firing, suspending, or otherwise disciplining an employee for exercising a right or privilege under the Arkansas Freedom of Information Act.

It also sent Hutchinson HB1190 by Rep. Kim Hammer, R-Benton, which would lower the age requirement for a concealed-carry permit from 21 to 18 for military members on active duty, in the reserves or former military members who have been honorably discharged.

The House on Tuesday narrowly voted down a bill that would change the requirements for creating a school district by detaching territory from an existing district.

HB1242 by Rep. Mark Lowery, R-Maumelle, failed in a vote of 49 to 25. The bill that would have changed the population requirement for a new district from 4,000 students to 2,500 students needed 51 votes to pass.

Rep. John Walker, D-Little Rock, argued that with the state Board of Education's recent takeover of the Little Rock School District and the move to re-examine the boundaries of that district and the Pulaski County Special School District, the bill could have paved the way to cleave out school districts in outlying areas of the county.

Lowery said the bill was just enabling language and that more would have been required for applications to the state Board of Education to form a new school district.

The House also approved HB1255, by Rep. Mary Broadaway, D-Paragould, which would create a program called Building Better Futures to offer education and job training for students with intellectual disabilities. The bill goes to the Senate.

It also passed SB199, by Sen. Jon Woods, R- Springdale, which gives the Department of Community Corrections the ability to issue warrants if prisoners escape while they're in the department's custody. The bill goes to the governor.

The House Public Health, Welfare and Labor Committee on Tuesday approved HB1355 by Rep. Jack Ladyman, R-Jonesboro, aimed at giving control to cities and counties over whether to add fluoride to the water supply.

The committee voted 11-5 to recommend the House approve the bill.

The Legislature passed Act 197 in 2011, requiring cities and towns that provide or sell water to more than 5,000 people to install fluoridation systems in their water plants, but only if private funding is available. Systems such as the one in Texarkana, where the water is pumped in from out of state, are exempted.

Ladyman's bill changes the language in Act 197 so that the company, corporation, municipality, county or agency that controls a water system shall "determine whether [ it] will adjust the quantity of fluoride in the water."

Several attempts to change Act 197 failed during the 2013 legislative session.

The House committee also voted down another effort by a House Republican to end enrollment in the private-option Medicaid expansion program.

The Legislature has approved and the governor signed into law SB96 by Sen. Jim Hendren, R-Sulphur Springs, to create a legislative task force to study changes throughout the Medicaid program by the end of this year. The measure leaves it up to the task force to come up with recommendations about what would happen after the private option ends Dec. 31, 2016.

Meanwhile, the House Education Committee endorsed HB1313, by Rep. Charlotte Douglas, R-Alma, to allow school districts to make up school days canceled because of weather, contagious outbreaks or other emergencies in 60-minute increments tacked on to the beginning or end of regular school days.