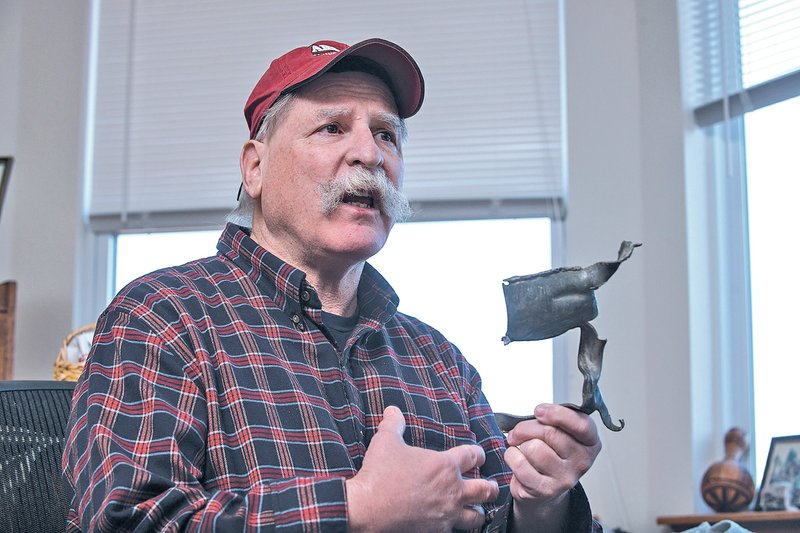 NWA Democrat-Gazette/ANTHONY REYES &#8226; @NWATONYR Sam Totten, a Springdale resident and former UA professor, shows a piece of bomb shrapnel brought from his travels to Sudan on Tuesday at his home in Springdale. Totten recently returned from another tough trip to the Nuba Mountains in order to carry up tons of food to civilians who face daily bombing by the Sudanese air force.

Sam Totten returned from his most recent jaunt to east Africa with a jagged, twisted hunk of metal that conveys a sense of the dangers people face there.

That metal, he said, is shrapnel he found from one of the many bombs dropped by the Sudanese government on its own people in the Nuba Mountains region.

Sam Totten has made four trips in the past five years to the Nuba Mountains in south Sudan:

July 2010: Interviewed internally displaced persons (IDP) from Darfur in a small camp in Nuba Mountains. These and other interviews appeared in Totten’s book, “A Documentary and Oral History of the Darfur Genocide.”

Totten, a Washington County resident and retired University of Arkansas professor, came home Dec. 16 after spending more than two weeks delivering about eight tons of food to starving civilians in the Nuba Mountains. He traveled with an interpreter and a driver.

It was the second such humanitarian mission Totten has completed to the Nuba Mountains since 2013. He also made an attempt to get there in May, but fell short of his destination because of heavy fighting in the area.

Despite the risks these trips pose to his health and his life, the 65-year-old vowed to continue going periodically to help those suffering from malnutrition.

"As long as I can do it physically, I'll do two trips per year," he said.

Rebels in the region are intent on overthrowing Sudan's president, Omar al-Bashir, though they still haven't been able to capture control of their home state.

The Sudanese government regularly attacks the Nuba Mountains from the air, maiming and killing civilians with bombs unleashed from above. The situation has left many people there without access to food or water.

"The government is using food as a weapon of war," said Totten, who has spent decades studying genocide.

Journalists reported more than 450 bombs and rockets had been dropped on civilian targets in the Nuba Mountains in December alone, according to Totten.

While traveling over rough terrain in the Land Cruiser he rented, Totten had to scramble several times when Sudanese bombers roared overhead. He described running to locate rocks to hide behind or ditches to hunker down in when planes were spotted.

"Several of the encounters were particularly harrowing, and this was particularly true since they flew right over us and, in one case, circled around twice," he said.

Totten said he received $10,400 in donations for the food he would distribute. Those donations came from more than 50 people and ranged from $25 to $2,000. Friends, family members, colleagues and local community members pitched in.

He spent $9,500 on food for the Nuba people and is saving the rest for his next trip, tentatively set for April. He used $6,000 of his own money to pay for other expenses such as his air travel, rental of the Land Cruiser and food for his interpreter and driver.

The Omni Center for Peace, Justice and Ecology in Fayetteville organized a fundraiser for Totten's cause last year. Dick Bennett, a co-founder of the Omni Center, thought it was important to support Totten, even though he had concerns about Totten's safety.

"I think all of his friends said, 'Don't do it.' I was full of trepidation for him because it's so dangerous," Bennett said. "But he had to do it."

"It was enough to be really helpful to him. He really welcomed the help, and mostly I think he welcomed the moral support," Hobson said. "He's a one-man humanitarian mission. I thought Fayetteville ought to get behind his work."

The Rev. Lowell Grisham, rector at St. Paul's Episcopal Church in Fayetteville, said he got to know Totten through Totten's wife, Kathleen Barta, who is a church member. The church contributed money for Totten's trip as well.

He called Totten "one of the bravest, most wonderful people" he knows.

"He's reaching into one of the most threatened places in the world, bringing food and things for people's survival, people who are threatened with extinction," Grisham said. "And it's a place and people who are not getting too much attention from the rest of the world."

Totten bought the food -- mostly sorghum, but also some sugar and cooking oil -- in South Sudan before transporting it into the mountains. He asked for salt, but could find none for sale.

Meanwhile, Totten said he ate very little. He went an entire five-day stretch without eating, but that didn't bother him; all he really craved was water, he said. Though he brought two dozen candy bars with him, he ate only one and gave the rest away.

Nobody knows exactly how many people live in the Nuba Mountains, but estimates put the population at around 1 million, Totten said. They are scattered across villages of various sizes. Some live in caves.

Activists have called on the United States and United Nations to establish a humanitarian corridor to transport food and medical supplies to the Nuba people, but nothing like that has been done, Totten said.

There are those who think Totten is "an absolute fool" for volunteering to put himself in harm's way, he said. But he hates the thought of doing nothing.

Ever since the Holocaust, he said, many have decried those within Germany who stood by and did nothing. Totten said the concept of "bystander" can be extended outside the country where atrocities are being committed.

"I'll be damned if I'm going to be a bystander," he said.