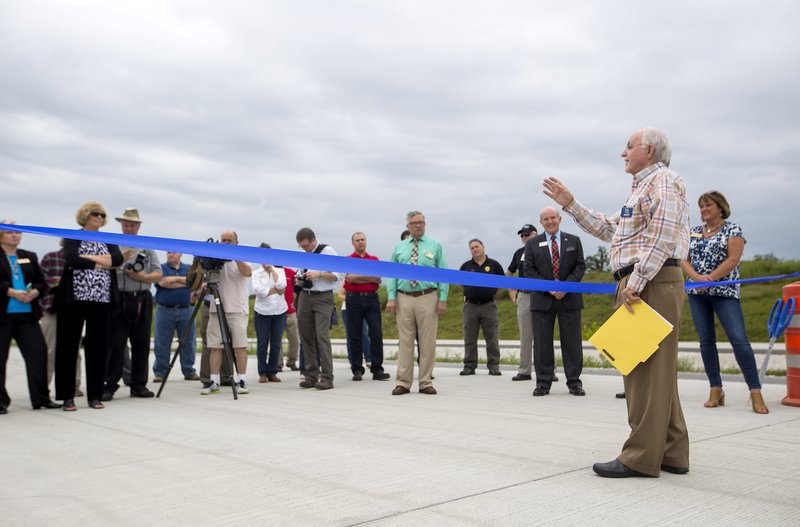 HIWASSE -- A few sprinkles from an overcast sky Friday morning didn't faze officials opening the newest section of the Bella Vista Bypass, which will be Interstate 49.

Dick Trammel, Arkansas highway commissioner, and other local dignitaries gathered below the newest Arkansas 74 overpass, just west of Hiwasse, and cut a blue ribbon using a huge pair of scissors. A couple of trucks blew their horns in salute as they passed above. Most of the cars in sight belonged to those attending the event.

What’s in a Bypass

The Bella Vista Bypass was designed to route interstate traffic around the western edge of Bella Vista near Interstate 49’s Exit 93, rejoining I-49 near Pineville, Mo. The road is expected to take up to 6,000 cars a day off U.S. 71 through Bella Vista.

"The significance of opening this section is we're standing on a highway that's being built, not talking about it," Trammel said. "This is not a highway to nowhere."

Trammel said two-thirds of the 21-mile project is under contract, $86 million worth so far. By late May 2016, two lanes should be finished from Benton County Road 34 on the west side of Bella Vista to existing I-49 at Bentonville, Trammel said.

A 2.5-mile section from Benton County 34 to the state line will be the last part to be built. Missouri highway officials told Northwest Arkansas planners in March finishing the Bella Vista bypass in Missouri doesn't appear to be on the state's list of priority projects.

"It doesn't look like there'll be enough money to do that," Andrew Seiler with the Missouri Department of Transportation told regional planners. "It will likely be pushed back."

Trammel said in March he was "deeply concerned" about getting the connection finished in a timely manner.

The two-lane portion of the bypass in Arkansas, when connected to Bentonville to the east and the Missouri state line to the north, is expected to cost about $274 million. It will include full scale interchanges in anticipation of having four lanes. Highway officials estimate the state will need another $50 million to complete the highway as four lanes.

Trammel said voters' approval of a sales tax for highway improvements in 2012 paved the way for where the highway project is now, and he and others are working to find the money to finish the two additional lanes. Trammel said he'd like to have that money in hand by about the time the two lane part of the project is finished.

Trammel said Missouri officials are looking at ways to raise money for highways and he's confident Missouri will find a way to build it's 7-mile section from the state line to I-49 just south of Pineville.

Rep. Dan Douglas, who also sits on Gov. Asa Hutchinson's Working Group on Highway Funding, said he uses the newly built sections of the bypass almost every day to drive between his home and farm.

Douglas said the project is important to the area because it will make travel faster and safer than the curvy Arkansas 72, plus it will spur economic development in the area.

"This is huge for the west part of the county. Our highways are our life blood, you can't grow the economy without good roads," Douglas said. "Fuel tax revenue is going down, and we've got to address how we're gonna fund our highways."

Rep. Kim Hendren said U.S. 71 once went through those towns until it was moved further east, bypassing the area. He noted the new interstate access and the proximity of rail service on the west side of Benton County and the Northwest Arkansas Regional Airport just to the southeast, saying he wouldn't be surprised to see an intermodal facility developed.

"We've got I-49 now with access to anywhere in America," Hendren said. "The opportunities here are amazing. It makes sense when you have access like this."

Ron Wood can be reached by email at [email protected].com or on Twitter @NWARDW.