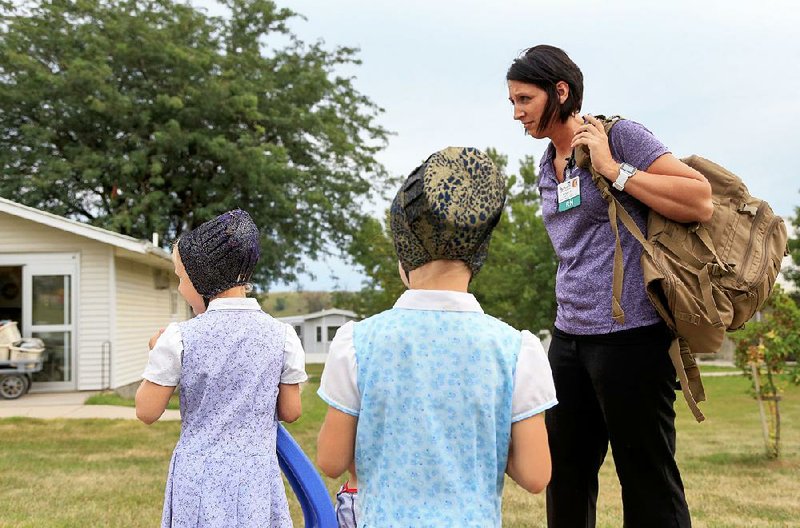 Nurse Kerri Lutjens carries a backpack of supplies as she walks past young Hutterites at the Tschetter Colony near Olivet, S.D.

OLIVET, S.D. -- A spaghetti dinner with people in prairie dress and a church service in German is all in a day's work for Kerri Lutjens. 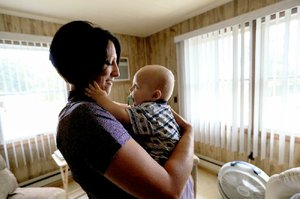 Photo by NATI HARNIK / AP
Kerri Lutjens looks over Rylan Hofer, an 8-month-old Hutterite, during a home visit at the Tschetter Colony. The nurse serves several communities of Hutterites in South Dakota.

The 33-year-old nurse, who doesn't speak German, has spent the past few years gaining the trust of several communities of Hutterites, a deeply religious people with ancestral ties to the Amish who live in insular farming communities in the Great Plains, upper Midwest and Canada.

Although she provides a broad range of care to the eight South Dakota Hutterite colonies she serves, Lutjens has paid particular attention to vaccinating children in these communities and preventing outbreaks like one in Ohio last year in which 383 people, most of them unvaccinated Amish, got the measles.

In the first seven colonies that welcomed Lutjens, the combined rate of children with up-to-date vaccinations has gone from about 13 percent since she started administering vaccines in 2013 to well over 90 percent today. Her work hasn't gone unnoticed: The Centers for Disease Control and Prevention recently lauded Lutjens' vaccination success, noting the cultural sensitivity she has shown along the way.

"They're their future. They're going to keep their colony going," Lutjens said of the children she treats. "So if we can instill those values as little people, we're going to have a much healthier colony in 20 years."

In traditional Hutterite colonies, the women wear ankle-length dresses and black head scarves and the men serve as the providers, working mostly in agriculture or building houses on the colonies. Like the Amish, the Hutterites aren't averse to vaccinations, but because they live in remote areas and go into town infrequently, getting their children vaccinated hasn't been routine.

"They're not anti anything," Lutjens said. "They just have a different way of going about things."

Hutterite colonies are spread across the Great Plains of the United States and southern Canada, and the majority of American colonies are centered in Montana and South Dakota. Along with the Mennonites and Amish, the Hutterites are descended from Anabaptists and trace their roots back to the Radical Reformation of the 16th century.

Unlike the Amish, those in the Hutterian Brethren Church embrace technology, using cellphones, cars and trucks -- and modern medicine. Residents of Lutjens' colonies still seek medical treatment at local hospitals and clinics, but she provides much of their initial care.

Lutjens said her personal interactions are the key to earning these communities' trust.

Hoping to establish ties with an eighth colony, she attended a communal dinner this spring to explain what she could offer to residents. She then joined them for their nightly church service in German, which is the primary language in many colonies and which many Hutterites learn before learning English.

With the help of a physician's assistant, Lutjens sets up shop in a different one of the eight colonies she treats nearly every day.

At the Tschetter Colony, a remote outpost of single-story houses and communal buildings surrounded by acres of farmland about 70 miles southwest of Sioux Falls, Lutjens' makeshift clinic is housed in an empty room, sandwiched between the colony's church and usual dining hall. Lutjens uses the colony's speaker system here to let patients know she has arrived and is seeing patients; she'll also use a phone in the nearby church to call families and ask them to come in.

Lutjens treats hundreds of patients in the eight colonies, and she greets each with a warm familiarity.

On a recent day, Karen Hofer brought her son to Lutjens' clinic to treat an ear infection. She said Lutjens' presence has helped families by making health care more accessible. In Hutterite colonies, mothers are the primary caretakers, but in many they don't drive.

"It's ... just easier, and she stresses [vaccinations] a lot," said Hofer, who wore a long purple dress and black head scarf and spoke in a thick German accent.

Larry Decker, 64, said Lutjens' presence helps the entire colony be healthier, particularly him; he has a lengthy medical history and is generally apprehensive of leaving the colony to seek medical attention.

"Like today, I wouldn't have seen anybody. I would have pushed it off five years if I had to go see somebody, but if I can go see her I will," said Decker, who farms and keeps honeybees.