Cruz visits state, lays out his plans for presidency 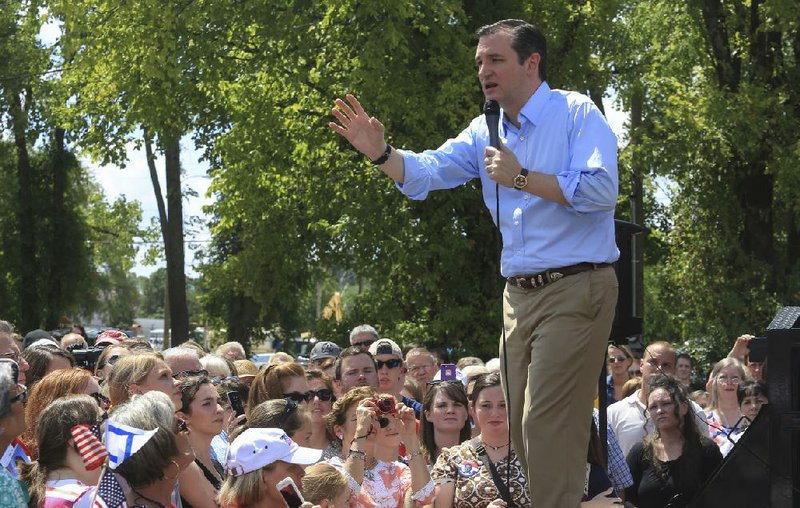 Texas Sen. Ted Cruz speaks to a crowd of about 350 people in Little Rock. About 200 turned out for his later stop in Russellville. Cruz will be making his third stop in Arkansas on Sunday, Feb. 28, 2016.

CORRECTION: U.S. Rep. Bruce Westerman wasn’t on hand for a speech in Van Buren by Ted Cruz. This story incorrectly listed Westerman as one of the attendees at the Lincoln Day Dinner event.

U.S. Sen. Ted Cruz cast himself as a more conservative alternative to other Republican presidential contenders during a visit to Little Rock, Russellville and Van Buren on Wednesday.

"The difference, frankly, between me and the very fine gentlemen on that debate stage is that I've walked the walk and have been a consistent conservative every day," the Texas politician said. "We can't take a risk anymore with someone who says one thing and does another. We need a leader we can count on. With me, you know exactly what you're going to get."

Cruz said that on his first day in office, he would repeal President Barack Obama's "illegal executive actions," but he didn't elaborate.

Cruz said he would also instruct the U.S. Department of Justice to open an investigation into Planned Parenthood, tell every federal department that "religious persecution ends today," rip up the nuclear deal with Iran and move the U.S. Embassy in Israel from Tel Aviv to Jerusalem.

Starting in his second day, he said, he would repeal Obamacare, end the educational standards known as Common Core, and rebuild the military, among other things.

He spoke to at least 350 people in Little Rock and 200 in Russellville. During those stops, his speeches lasted about 20 minutes, and he lingered for more than 45 minutes, signing copies of his book A Time for Truth: Reigniting the Promise of America and copies of the U.S. Constitution.

In Van Buren, he spoke for about 35 minutes to the 550 people who attended the Crawford County Republican Committee's Lincoln Day Dinner.

Earlier in the day in Little Rock, Hot Springs resident Barbara Deuschle waited for Cruz outside his tour bus door.

In the 90-degree heat, she held an autograph-covered square piece of fabric that she said will eventually become the center of a quilt.

She already had signatures from dozens of national leaders, most of them collected at the once-every-four-years Republican National Convention.

But instead of trying to get Cruz's signature in Cleveland in 2016, she decided to get it during his Arkansas campaign swing.

"He was worth the wait," she said, after hearing his speech and collecting his autograph. "He raised issues that I hadn't even thought about."

At Lake Dardanelle State Park in Russellville, Pam Magness, an accountant, said she wasn't sure who she would vote for in 2016, but she appreciated Cruz's conservative views.

"I'm very interested on where he stands on the issues," she said. "I watched the [Aug. 6 Fox News] debate, and he came across as very conservative and very genuine."

While at the park, Cruz commented on Staff Sgt. David Wyatt, a Marine killed in the July 16 attack on military facilities in Tennessee.

Wyatt, 35, was born in Morganton, N.C., but grew up in Ozark and Russellville.

"Here in Russellville, we are all mourning the loss of Staff Sgt. David Wyatt, who was murdered by the face of radical Islamic terrorism in Chattanooga, Tenn.," he said. "Those are words this president refuses to utter."

Foreign policy was a theme for him in all three cities. He said Obama failed to understand the threats that face the United States when he refused to say "radical Islamic terrorism."

Cruz called the Iran deal the most dangerous threat facing the country, and he denounced any effort to unfreeze billions of dollars belonging to Iran. If the nuclear agreement proceeds, the U.S. will become the leading financier of terrorism, he added.

He said 2012 Republican presidential nominee Mitt Romney, former Florida Gov. Jeb Bush and Obama were similar in calling his remarks on the subject too extreme.

In a tweet, Romney said Cruz "is way over the line on the Obama terrorism charge."

"So now the Democratic field consists of a wild-eyed socialist with ideas that are dangerous for America and the world and Bernie Sanders," he said.

"They had planned to have an early debate. The problem was the debate invitation got emailed to Hillary."

When a cellphone rang in the audience, Cruz joked that they were being watched.

"That's homeland security calling us because we are indeed plotting the peaceful overthrow of the U.S. government," he said.

The swing through Arkansas was part of a bus tour through a bloc of Southern states that Cruz said was important to his campaign, in part because of their early primary dates.

A number of Southern states, including several that have athletic teams in the Southeastern Conference, are holding their presidential primary elections on March 1. The bloc is sometimes referred to as the SEC primary states.

"The role that Arkansas and the other SEC primary states are going to play, is we're going to ensure the next Republican nominee for president is a real and genuine conservative," he said. "That's the only way we win. Every time we nominate Democrat-light, we lose. We can't do it again."

Boozman said he supports former Arkansas Gov. Mike Huckabee in the presidential race, but he was glad Cruz visited Arkansas.

"He's our native son," he said of Huckabee.

Boozman said he expects more of the presidential candidates to visit the state.

People attending the dinner were served by about 25 youths from the Crawford County 4-H Club and the Believers Homeschool Association.

"They're a little nervous," said Nickie Harding, Crawford County extension agent with the University of Arkansas System's Division of Agriculture. "But they want to do a good job, and they know how important it is."

The youths received a standing ovation after the dinner.

Award on, then off

The Family Council Action Committee said Wednesday morning that it would give its Power of Courage Award to state Reps. Charlene Fite, R-Van Buren, and Justin Harris, R-West Fork, for "exhibiting their Christian faith and values" in the Arkansas Legislature.

The presentation, which the council said was scheduled for the Lincoln Day Dinner in Van Buren, didn't occur.

Harris drew scrutiny after he sent his two adopted daughters, ages 3 and 5, to live with Eric Cameron Francis and Francis' wife. Eric Francis sexually abused the 5-year-old. The state has since made it illegal to "re-home" adopted children, and Harris has announced that he will not run for re-election.

Arkansas Family Council director Jerry Cox said his group had been cleared by event organizers to give the award to Harris and Fite, but that once he announced the award Wednesday morning, there was a social media firestorm tying Harris' award to the re-homing.

Cox said organizers of the dinner later called him to say that the award was distracting too much from Cruz's appearance, and Cox agreed to not present the award Wednesday night.

"It got turned into the re-homing issue, almost like it was for re-homing," Cox said. "It got blown out of proportion, in my opinion."

Cruz declined to comment on Harris or the award, saying it was a state issue.

Information for this article was contributed by Spencer Willems of the Arkansas Democrat-Gazette.