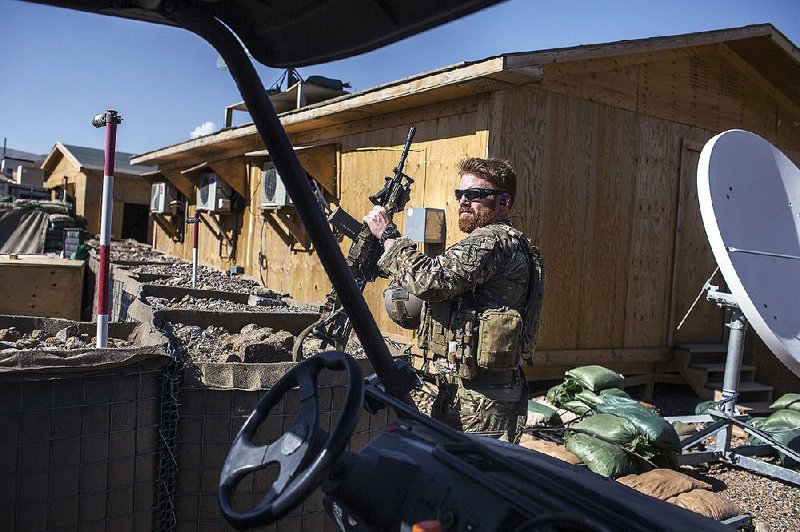 An American special operations soldier prepares for a patrol in June 2014 in Afghanistan’s Parwan province. U.S. forces continue combat operations against the Taliban on land and in the air despite President Barack Obama’s declaration months ago that the war was over.

KABUL, Afghanistan -- Months after President Barack Obama formally declared that the United States' long war against the Taliban was over in Afghanistan, the U.S. military is regularly conducting airstrikes against low-level insurgent forces and sending special operations troops directly into harm's way under the guise of "training and advising." 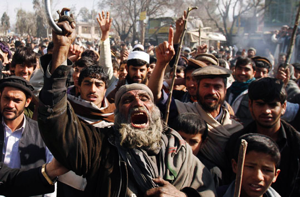 In justifying the continued presence of the U.S. forces in Afghanistan, administration officials have insisted that the troops' role is relegated to counterterrorism, defined as tracking down the remnants of al-Qaida and other global terrorist groups, and training and advising the Afghan security forces who have assumed the bulk of the fight.

In public, officials have emphasized that the Taliban are not being targeted unless it is for "force protection" -- where the insurgents were immediately threatening U.S. forces.

But interviews with U.S. and Western officials in Kabul and Washington offer a picture of a more aggressive range of military operations against the Taliban in recent months as the insurgents have continued to make gains against struggling government forces.

Rather than ending the U.S. war in Afghanistan, the military is using its wide latitude to instead transform it into a continuing campaign of airstrikes -- mostly drone missions -- and special operations raids that have in practice stretched or broken the boundaries publicly described by the White House.

Western and military officials said U.S. and NATO forces conducted 52 airstrikes in March, months after the official end of the combat mission. Many of those air assaults, which totaled 128 in the first three months of this year, targeted low- to midlevel Taliban commanders in the most remote reaches of Afghanistan.

As early as January, when officials in Washington were hailing the end of the combat mission, about 40 U.S. special operations troops were deployed to Kunar province to advise Afghan forces that were engaged with the Taliban over a handful of villages along the border with Pakistan.

With the troops on the ground, the command for the U.S.-led coalition called in airstrikes under the authority of force protection, according to two Western military officials, who spoke on the condition of anonymity because the details of the operation are not public.

"They are putting guys on the ground in places to justify the airstrikes," one of the officials said. "It's not force protection when they are going on the offensive."

Commenting on the continuing military operations against the Taliban, the top U.S. commander in Afghanistan, Gen. John Campbell, denied accusations that he was putting troops into harm's way just to enable more airstrikes.

He has insisted that it is within his purview to target Taliban insurgents who pose a threat to not just U.S. or NATO troops but to any Afghan security forces.

And his options on the ground were clear, he said, even if Washington's public description of them was not.

"Washington is going to have to say what they say politically for many different audiences, and I have no issue with that," Campbell said. "I understand my authorities and what I have to do with Afghanistan's forces and my forces. And if that doesn't sell good for a media piece then, again, I can't worry about it."

He added: "Combat and war and transition, as you know, it's a very complex thing. For me, it's not black and white."

The operations are continuing during a troubling stretch for the Afghan security forces, as the Taliban are continuing to make gains. Members of the nation's military and police forces were killed by the insurgents at a high rate last year.

In the first three months of this year, things already appeared worse: The casualty rate rose 54 percent over the same period last year, according to one Western and one Afghan official, who spoke on the condition of anonymity because the figures are not public.

The danger was highlighted in recent days in the northern province of Kunduz, where the Afghan army has been forced to send thousands of reinforcements to beat back a major Taliban offensive.

Afghan officials on Wednesday warned of an influx of insurgents from neighboring Pakistan into northern Afghanistan in an attempt to destabilize what has mostly been a peaceful part of the country.

The "terrorists" are coming from Pakistan, including foreign fighters -- such as Chechens and Uzbeks -- from other regional countries, Interior Ministry spokesman Sediq Sediqqi said.

He said the insurgents are flooding into the northern Kunduz province, where the Taliban began a major push over the weekend, closing in on the provincial capital, also called Kunduz.

Around 200 militants have been killed so far in Kunduz, Sediqqi said, adding that 12 Afghan soldiers also have died in the fighting. The insurgents were hiding in civilian homes in the villages, he added, and the troops were trying to be "careful to avoid civilian casualties."

Coalition forces deployed jets to the area in a show of force but no munitions were dropped, officials said.

In such an environment, U.S. military officials have been reluctant to let go of the war, arguing that their involvement remains necessary given the Taliban threat and changing regional factors.

But in March, when Obama and President Ashraf Ghani of Afghanistan publicly announced that they had agreed to slow the withdrawal of U.S. troops, administration officials emphasized that counterterrorism and training were still the focus, not everyday combat missions against the Taliban.

The idea of the extended timeline was to bolster the ability of Afghans to fight, officials said, not to directly fight on their behalf.

Now, though, the distance seems to be widening between the administration's public statements and what the military is doing, whether at the behest of the White House or on its own, officials said.

"What I'm thankful for is that I have the authority and flexibility to make those very tough decisions," Campbell said. "They could have said, 'Every time you hit a target, you have to get approval.'"

Beyond any discrepancy over mission descriptions, U.S. airstrikes in Afghanistan have a fraught history. A high number of civilian casualties in such strikes created increasing tensions with Afghan officials and the public, and in recent years those missions had been sharply restrained to cut the risk.

Even though U.S. officials argue that drone strikes are controlled and precise, in truth they have been far from trouble-free -- a fact highlighted last week when a U.S. drone strike accidentally killed American and Italian hostages of al-Qaida in Pakistan.

Still, Campbell has found strong support from Ghani, who became the president in September. Many officials characterize their relationship as a strikingly close partnership: Campbell visits the president nearly every day -- more than any other Western official in the country -- and the commander's staff is not only helping to write policy for the Afghan forces but also helping direct overall strategy, at a time when the war is meant to be entirely in the hands of the Afghans.

Ghani, who has yet to name a minister of defense, has in many ways outsourced much of the running of the war to Campbell.

Some Western officials have privately expressed discomfort with the U.S. role and questioned how prolonging the U.S. strategy in Afghanistan would be more effective this year than it had in the past 13.

"I'm not surprised they are continuing in this way," said one Western diplomat living in Kabul. "What's surprising is how much of it they're doing."

Many of the strikes described by officials had no discernible basis for force protection or terrorist hunting. One included an attack in Kunar province that wounded two miners; another in Ghazni killed several "common Taliban fighters" and, at most, one Taliban commander, according to the head of the provincial peace council.

In February, a disaffected ex-Taliban leader was killed in a drone strike in remote Helmand province. Though the commander, Mullah Abdul Rauf Khadim, had pledged allegiance to the Islamic State extremist group, there was no evidence he had been staging or even planning significant operations.

When asked to justify the strike, the U.S. military did not say it was for counterterrorism purposes but rather described it as force protection -- despite there having been no U.S. forces stationed in the area for years.

When asked about that decision, Campbell responded with a question of his own: "Do you know what was in his mind?" he said of Khadim.

When confronted with reports of a re-expanded U.S. combat role in Afghanistan, Obama administration officials have vehemently rejected the claims.

One such case came in November when Josh Earnest, the White House spokesman, sought to discredit an article by The New York Times reporting that Obama had quietly approved an expanded combat authorization for U.S. forces in Afghanistan in 2015.

"The U.S. military will not be engaged in specific operations targeting members of the Taliban just because they're members of the Taliban," Earnest had said at the time. He laid out only two circumstances warranting continued combat operations: protection of U.S. soldiers still stationed in Afghanistan and the counterterrorism mission against al-Qaida and similar groups.

On Sunday, however, a spokesman at the National Security Council issued a statement that appeared to broaden the circumstances, saying that U.S. forces may provide combat support to Afghan troops "in limited circumstances to prevent detrimental strategic effects to these Afghan security forces."

Information for this article was contributed by Azam Ahmed, Joseph Goldstein, Fatal Muzhary, Khalid Alokozay, Farooq Jan Mangal and Naimatullah Karyab of The New York Times and by Rahim Faiez of The Associated Press.