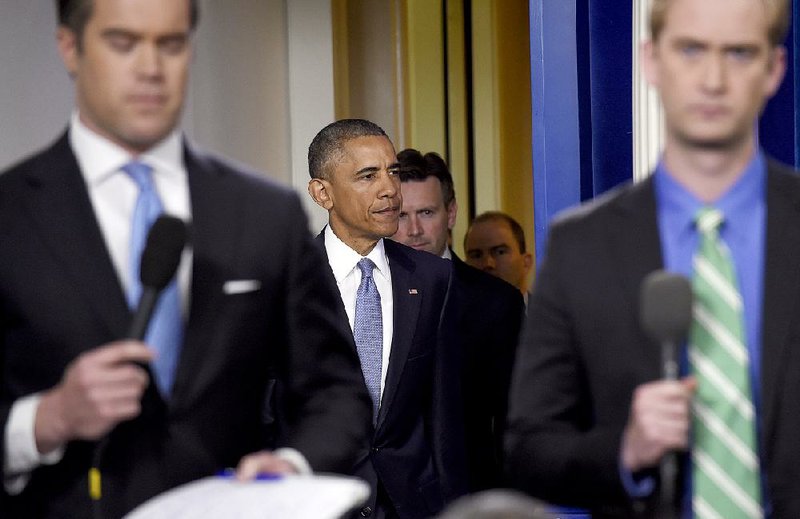 WASHINGTON -- About once a month, staff members of the congressional intelligence committees drive across the Potomac River to CIA headquarters in Langley, Va., and watch videos of people being blown up.

As part of the ritual, the staff members look at the footage of select drone strikes in Pakistan and other countries and a sampling of the intelligence buttressing each strike, but not the internal CIA cables discussing the attacks and their aftermath. The video screenings have led lawmakers to say the targeted killing program is subject to rigorous review, to defend it vigorously in public and to authorize its sizable budget each year.

That unwavering support from Capitol Hill is but one reason the CIA's killing missions are embedded in U.S. warfare and unlikely to change significantly despite President Barack Obama's announcement Thursday that a drone strike accidentally killed two hostages, an American and an Italian.

The program is under fire like never before, but the White House continues to champion it, and CIA officers who built the program more than a decade ago -- some of whom also led the CIA detention program that used torture in secret prisons -- have ascended to the agency's senior ranks.

Although lawmakers insist there is great accountability in the program, interviews with administration and congressional officials show that Congress holds the program to less rigorous scrutiny than many members assert. Top CIA officials, who learned the importance of cultivating Congress because of the resistance they ran into on the detention program, have dug in to protect the agency's drone operations, frustrating a pledge by Obama two years ago to overhaul the program and pull it from the shadows.

Perhaps no single CIA officer has been more central to the effort than Michael D'Andrea, who was chief of operations during the birth of the agency's detention and interrogation program and then, as head of the CIA Counterterrorism Center, became an architect of the targeted killing program. Until last month, when D'Andrea was quietly shifted to another job, he presided over the growth of CIA drone operations and hundreds of strikes in Pakistan and Yemen during nine years in the position.

In secret meetings on Capitol Hill, D'Andrea was a forceful advocate for the drone program and won supporters among both Republicans and Democrats. Congressional staff members said he was particularly effective in winning the support of Sen. Dianne Feinstein, D-Calif., who was chairman of the Senate Intelligence Committee until January, when Republicans assumed control of the Senate.

Feinstein for years has tried to beat back criticism of the drone program from some liberal Democrats and human-rights groups who have raised questions about civilian casualties. CIA officials have assured her, she has said, that there are hardly any civilian deaths in the strikes.

"The figures we have obtained from the executive branch, which we have done our utmost to verify, confirm that the number of civilian casualties that have resulted from such strikes each year has typically been in the single digits," Feinstein said in 2013.

But the recent accidental deaths of the hostages is only the latest example of how difficult it is for the CIA to know exactly whom it is killing. The White House provided a public accounting of the deaths only because the victims were Westerners. The government has never offered a detailed explanation of attacks that witnesses say killed women, children or members of a wedding party.

Organizations that track drone strikes, like the New America Foundation, the Bureau of Investigative Journalism and The Long War Journal, estimate that drones have killed some 4,000 people, about 500 of them civilians. But these numbers, based on news accounts and some on-the-ground interviews, are considered very rough.

The confidence Feinstein and other Democrats express about the drone program, which by most accounts has been effective in killing hundreds of dangerous militants and senior al-Qaida figures over the years, stands in sharp contrast to the criticism among lawmakers of the now defunct CIA program to capture and interrogate al-Qaida suspects in secret prisons.

But the programs were led by some of the same people. The CIA asked that D'Andrea's name and the names of some other top agency officials be withheld from this article, but The New York Times is publishing them because they have leadership roles in one of the government's most significant paramilitary programs and their roles are known to foreign governments and many others.

D'Andrea was a senior official in the Counterterrorism Center when the agency opened the Salt Pit, a notorious facility in Afghanistan where prisoners were interrogated. His counterterrorism officers oversaw the capture and waterboarding of Abu Zubaydah, Abd al-Rahim al-Nashiri and Khalid Shaikh Mohammed. His actions are described in the Senate Intelligence Committee report about torture that was released late last year, although he was not identified publicly.

The drone program has been largely immune from the criticism in Congress that other CIA programs have attracted. In 2009, for example, when it became public that the agency had once hired the private security firm Blackwater to hunt and kill suspected terrorists, a member of Congress called D'Andrea a "murderer" during a private briefing, even though the Blackwater program had never carried out any lethal operations.

D'Andrea was angry about his treatment, a former colleague recalled. But he received no similar personal attacks for his leadership of the drone program.

It was two years ago that Obama gave a speech pledging to pull the targeted killing program from the shadows, and White House officials said they wanted to shift the bulk of drone operations from the CIA to the Pentagon, with the stated intent of making the program somewhat more transparent. But the intelligence committees have resisted the plan, in part because D'Andrea and other top agency officials have convinced lawmakers that the CIA strikes are more precise than those conducted by the Pentagon's Joint Special Operations Command.

As part of a bureaucratic reshuffling last month by John Brennan, the spy agency's director, D'Andrea has been replaced as head of the drone program by Chris Wood. After the Sept. 11, 2001, terrorist attacks, Wood held leadership roles in Alec Station, the group that led the hunt for al-Qaida suspects and was central to the interrogation program. He ultimately was in charge of that unit and would later serve as station chief in Kabul. Most recently, he supervised all operations in Afghanistan and Pakistan.

Wood is now running a targeted killing program that is the subject of multiple investigations that Obama announced earlier this month.

The CIA launched its first drone strike in Pakistan in 2004, at a time of growing concern in the government about abuses inside the agency's detention and interrogation program. Many in Congress expressed horror at the details of interrogations carried out in the secret CIA prisons, even if some senior lawmakers had been briefed about many of the interrogation methods during the birth of the program in 2002.

Operatives inside the CIA's Counterterrorism Center drew a lesson from the experience. They have given regular briefings to the intelligence committees about the drone strikes and made sure to have both committee members and their staffs visit the CIA to watch the drone videos. These moves have provided a veneer of congressional oversight to the program and nurtured widespread support for drone strikes on Capitol Hill that did not exist for the detention and interrogation program.

Sometimes, lawmakers use the briefings to ask questions about why specific terrorism suspects have not yet been killed and to express their dismay that the CIA is not being aggressive enough in its killing operations.

One such instance was in 2013, when senior Republicans on the House and Senate intelligence committees were angry after they heard the CIA had not yet killed Muhanad Mahmoud Al Farekh, an American citizen who had become a top al-Qaida operations officer and was hiding in Pakistan.

The Republican lawmakers, Sen. Richard Burr of North Carolina and Rep. Mike Rogers of Michigan, said during the private sessions that the administration was being timid in its handling of the case, and urged that Farekh be hunted and killed.

He was arrested by Pakistani security forces the next year and is now facing trial in Brooklyn.