It's in the air 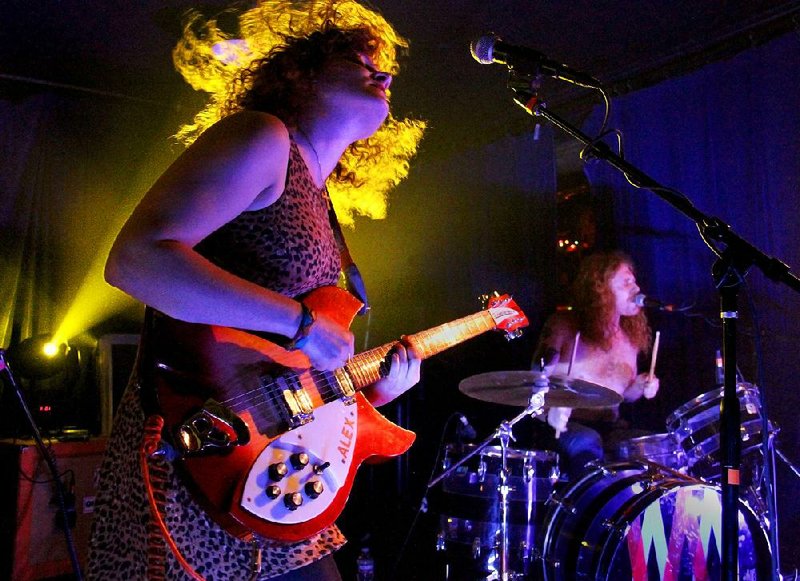 HOT SPRINGS -- It started when Bill Solleder, a former rock star working for a record label in Chicago, picked up a real estate booklet. It was 2003 and he and his wife, Shea Childs, were visiting her parents in Hot Springs. Solleder wanted to buy a house, but in Chicago he couldn't afford much space. Turns out, for $100,000 -- less than half of what the couple had planned to spend -- he could get five bedrooms in Hot Springs. The next day he called a real estate agent and, just like that, "Things changed," Solleder says.

Now Solleder, 47, is a figurehead for the underground Hot Springs arts community. He and Childs founded Valley of the Vapors Independent Music Festival, which just celebrated its 11th spring. They solidified Low Key Arts as a nonprofit venue space, started a film festival -- Arkansas Shorts -- and, in 2010, organized the first Hot Water Hills Music & Arts Festival. Currently, they are working on a solar-powered public radio station.

And Valley of the Vapors (VOV) was the cornerstone, even though originally, it wasn't intended to be a festival at all. Solleder's friend, Chicago musician Nora O'Connor, wanted to swing by Hot Springs on her way back from playing South by Southwest (SXSW), the music and film festival in Austin, Texas. Could Solleder book her a show?

Solleder didn't know many people. He spent a lot of time traveling for his father-in-law's industrial construction company. But when he was in Hot Springs, he was bored.

"I played in bands forever, and I come here ...

it's just bar bands and blues bands," he says. "So I'm jonesing for some music."

"We had opened up a place to play on the way to Austin. And of course, there are 10,000 bands heading to Austin, and they want to play, and opportunities are slim because they're all taken," Solleder says.

Within two weeks, he had booked 40 bands to play Maxine's over seven days. He named the event Valley of the Vapors and posted fliers. He had no idea what he was getting into.

It's a warm Saturday evening -- Day 3 of VOV -- and a Chicago band, The Gunshy, has just taken the stage in the blue warehouse nestled against sun-pink hills. At a pizza parlor across the street, a music documentary screens, offering a free alternative to people who aren't interested in paying $10 for high-decibel rock. But most people seem drawn to The Gunshy's rollicking beat, heading inside from the parking lot and The Cat and Mouse Parade, a small trailer featuring altered thrift-store paintings.

In front of Low Key, there are several hand-painted prayer flags, "traditionally used to spread messages of good will on the wind," says Chicago artist Andrea Jablonski. Some of them were created at a workshop earlier that day.

Children decorate the handicap ramp with sidewalk chalk, a food truck serves authentic Mexican and inside, upward of 100 people ring the stage, some of them dancing unabashedly. The majority of the crowd is teens and 20-somethings, but there are at least a dozen 'tweens and a handful of people in their 50s.

The older crowd was better represented a few hours ago, when banjo and harmonica player J.D. Wilkes, of the Legendary Shack Shakers, held a workshop for about 30 people at Emergent Arts. Many brought their instruments, eager to have Wilkes correct their claw-hammer technique.

Inside Low Key, it's loud and dark, with a bar, a few merchandise tables, bathrooms labeled "women" and "unisex," and six pop-art paintings by local artist Bethannie Newsom Steelman available for silent auction.

Matt Arbogast, frontman for The Gunshy, mumbles something about not wanting to cover any song that Elliott Smith played live, since Arbogast doesn't think he could measure up. Then The Gunshy launches into a raspy, wrenching cover of Smith's "King's Crossing." It sounds nothing like the ironic, jangly track released after the musician's death.

Before leaving the stage, Arbogast begs someone to adopt the friendly stray dog in the parking lot, promotes the night's remaining bands and compliments Hot Springs' hospitality.

Nearly every set will end this way, with a band member hailing the generosity of VOV, the fantastic food, the welcome addition of a masseuse in the green room. Either Solleder knows really polite bands, or he just really knows how to treat bands.

Solleder recalls the first show of the first VOV: "There was a local band here called Drove, sort of a shoegaze-y, instrumental, Mogwai thing."

Drove played to about 50 people, mostly underage kids sitting cross-legged on the floor of Maxine's.

"I thought, 'Oh my God, they're not going to get it,'" Solleder says. "These people have never been to a show. ... They look like a preschool or something."

But for the next band, Chicago-based punk called New Black, people scrambled to their feet and started jumping around.

"As soon as there was a beat, you could just see the release," Solleder says. "They were so thirsty for it, and we could see that there was a niche here. So we did it. Then we did it again immediately."

The total budget for the first VOV was $800, which Solleder paid out of pocket. After only losing $100, he was so excited that, about two months later, he threw a second VOV. Two months after that, he held a third.

"In all honesty, it was completely selfish. I needed it, because I loved underground music and it wasn't here," he says.

But he was still working for his father-in-law and he couldn't keep that pace. So in 2004, VOV became a once-a-year, week-long event, piggybacking off SXSW.

"I did South by Southwest five years ago and was scared out of my mind and never wanted to go back," Arbogast says.

Almost every other band on the lineup is fresh from Austin, but The Gunshy planned a week-long tour specifically around VOV. Arbogast likes VOV because of "the accessibility of everything we're addicted to."

"We showed up and there was a dog, free food, free booze, and the Water Liars playing tonight," says guitarist Ryan Ford.

"The sound is great. The stage is great. There's a nice room with food and drink," says bassist Jonathan Ford with Oklahoma's Native Lights, a '90s-influenced dive into well-crafted, swirling, sonic chaos.

Cathryn Wells and Ron Walter, both 25, drove from Little Rock for the shows on March 21.

"I've always wanted to come to this, and the lineup looked really cool," Walter says. "The other night, we looked up a lot of bands on Bandcamp, and the one band, Native Lights, was on Brooklyn Vegan."

"He was soooo good. His music was sad, like, I got sad. But then he was funny, and it was so perfect," Wells gushes.

Nobody comes to VOV to get signed, and according to Solleder, that's the key to its charm.

"Usually if you roll into a town, you're going to get two drink tickets and a slice of pizza," he says. "When we do volunteer training, I tell everybody, 'When a band comes up, greet them and say, 'Hello, welcome to Hot Springs.' And the bands, they're exhausted because they've been at South by. ... You're posturing, you're looking good, you're hoping someone's going to give you the right business card, and it's really stressful. You come here, that's gone."

As musician Al Scorch puts it, "I got to Valley of the Vapors, and I cleaned all that [SXSW] dirt off in the healing waters of Hot Springs."

Years ago, Steelman designed a VOV graphic, a drawing of two hands making a "V" with the index and middle fingers, while pressing the index fingers and thumbs together to form an "O," visually spelling VOV. It has been used on promotional materials and is often "thrown" like a gang sign by VOV crowds. Solleder knows of about two dozen people -- community members and members of passing bands -- who have the design inked on their bodies.

"That blows my mind. It's like, for life," says Solleder, who doesn't have any tattoos.

He tries to keep the VOV lineup fresh, but often bands ask to return.

"It's hard tell a band no," Solleder says. "I think it's really proof positive that what we're doing is genuine, that almost every band asks to come back."

"It's completely different from any other gig," says Alexandra Eastburn, 27, a Hot Springs native and the keyboardist for Memphis punk band Nots. "We're playing bars every night in cities where we don't know anybody, but tonight my family and friends are here. ... And there's little kids running around!"

Nots played six shows in four days at SXSW, just before coming to VOV. Eastburn's grandmother attends their VOV show, standing near the stage, smiling and occasionally using her fingers to plug her ears against the boom.

Other things a small-town music festival can get away with: "trail" shows (free, outdoor acoustic shows that sometimes involve hiking), "secret" shows (free shows with locations -- anything from a barbershop to an abandoned school bus -- announced the day-of) and killer after parties, usually featuring out-of-town bands from the lineup and occasionally featuring Solleder crowd-surfing.

"This is my favorite thing to volunteer for," says Jenn Walsh, 32. Her paycheck-job is with Goodwill Arkansas, but she volunteers for several nonprofits. "Because I love music, and it's such an amazing festival, and the community is so rich."

Low Key Arts has 80 year-round volunteers, and they start planning VOV about five months in advance. Volunteers man the bar, merchandise tables and door; they handle the food in the green room; they clean the venue each night; they find beds for out-of-town bands in local homes.

"Every band gets adopted," Walsh says. "Whenever you adopt a band, you do something nice for them, take them out to dinner or make them a gift basket."

She adopted Hutson, filling his basket with fruits and nuts, a blanket, socks, books and a monster figurine, since one of his singles is "Monster."

In 2006, Low Key bought a former laundromat from a now-shuttered hotel. Windows were busted and the roof was caved. Volunteers renovated the building, and Solleder and his father built the stage from reclaimed wood. Peelander-Z played the space's soft opening, and the next night, Lucero played the official opening. The building was packed, overflow spilling into the street.

Solleder is the only employee of Low Key. (Childs helps out, but her official job is midwifery.) In 2006, he quit construction and started paying himself a salary of $100 a week. Now, because of grants from the National Endowment of the Arts and the Arkansas Arts Council, he's able to pay himself $500 a week. VOV's annual budget is about $20,000, and more than a third of that comes from a single fundraiser -- an amateur burlesque show called the Spa City Sweethearts.

Favorite moment: Alex White, vocalist and guitarist for White Mystery, falls to her knees in front of a little girl upfront, unleashing half a minute of searing psychedelic guitar, seemingly just for the wide-eyed kid.

"That's so great," White says. She grabs her phone and searches for Girls. "I can't wait to tell my mom. She's always saying we don't get radio play!"

Peelander-Z closes out 2015's VOV, and Low Key is near its 200-person capacity. About 20 children -- Solleder-dubbed "Little people who rock hard but want to avoid bodily harm" -- crowd the wing of the stage, usually reserved for band equipment. There are dinosaur costumes, mosh pits and grade-schoolers hoisted onstage to provide an impromptu backing band.

Childs and her oldest daughter, Elizabeth Solleder, 14, are on the front row, pumping fists and flailing torsos, unbothered by the muscular mass of bodies repeatedly slamming them into the stage.

Solleder watches from the peanut gallery, his face a mask of perma-grin.

Print Headline: It's in the air/Ex-Chicago rocker’s move to Hot Springs gave rise to Valley of the Vapors music fest