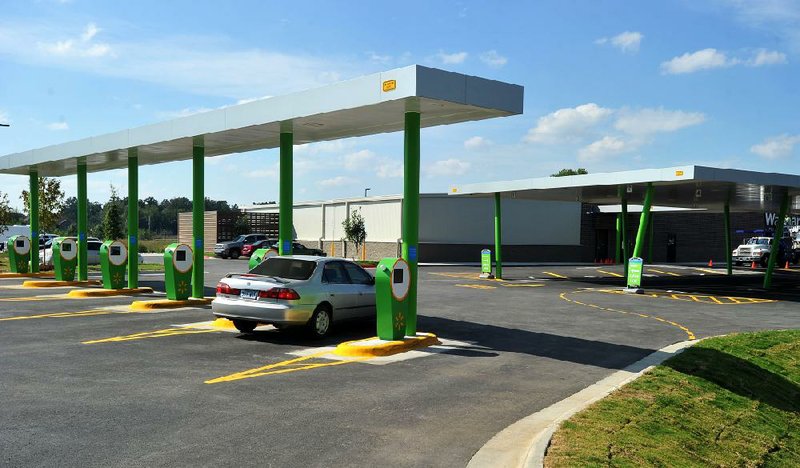 BENTONVILLE -- If Wal-Mart Stores Inc. President and CEO Doug McMillon wants to treat his wife, Shelley, to a home-cooked steak dinner and bottle of wine, he can place an order online for his groceries, drive to a new Wal-Mart store prototype and pick them up without ever having to get out of his car.

And he's not the only one.

The first-of-its-kind Wal-Mart Pickup-Grocery opens today on at the corner of Walton Boulevard and J Street, giving locals a view at what real convenience looks like.

"It's almost as if they're your personal shopper," Wal-Mart spokesman John Forrest Ales said of the 30 workers assigned to the store.

The facility consists of 15,000 square feet of space for produce, meats and frozen foods and other consumables, like dryer sheets, paper towels and baby formula. The covered parking lot has numbered slots for 19 customers at a time. Drive-thru shoppers get a parking space assigned to them at one of six touch-screen kiosks at the entrance to the lot.

The store is more like a warehouse than a store, using proprietary technology inside to squeeze in all the goods and make it easy for workers to find and move about. Imagine a grocery store with no need for aisle space. Wal-Mart employees and their families have been testing it since the first of the month, and they're liking it, said pickup-grocery store manager Mitch Fevold.

"The feedback has been outstanding," Fevold said. "People are saving an hour or more on their Saturday shopping."

More than 3,300 people have registered to use the site since Sept. 4, about the time workers started testing the service. Shoppers enter their zip code and wait to be "invited" to use the pickup-grocery. Those outside the company who have registered will be notified in the coming months, Ales said.

The new prototype store has about 10,000 items, the same number as can be found at former Express stores (now branded as small Neighborhood Markets) and has an inventory similar to the mostly-grocery Neighborhood Market. There's no added cost to use the pickup store, and product prices are the same as you'd find at another local Wal-Mart, Ales said.

Shoppers go to walmart.com/grocery to place their orders. A "cart" on the right side of the screen keeps a running tab of selected items so users know exactly how much will be charged to their debit or credit card. The website also shows shoppers a list of products previously purchased, so if a consumer buys pretty much the same thing every week, ordering becomes easier.

The site also lets them know if an item they requested is not available in the desired size or otherwise not available. In that case, consumers get a similar product of equal or greater value but charged the lower price. This is all communicated while ordering.

Customers specify a pickup time within a one-hour range. Orders can be picked up within two hours to three weeks. No cash will change hands at the pickup site, and anyone missing an item or has a problem with their order will have to call a 1-800 number on their receipt.

When shoppers arrive to pick up groceries, they first check in at a kiosk, where they're assigned a numbered parking space. Workers then bring out their bagged orders on a plastic cart. Employees will unload the bags into the customer's trunk or back seat. Liquor sales will require a proof of identification at pickup. Payment is not charged until delivery is made.

Wal-Mart employee Randy Jones, who demonstrated the pickup part of the process recently, said: "We'll be happy to open their eggs so they can see none are broken and show them their bananas."

Store hours are 7 a.m. to 10 p.m. If a customers becomes a no-show, they'll be notified and asked if they still want their order.

There's no word yet on if or when the Bentonville prototype could be expanded into other markets.

"Right now, our focus is on this particular test," Ales said.

McMillon has indeed tested the concept himself, as have other members of Wal-Mart's senior leadership.