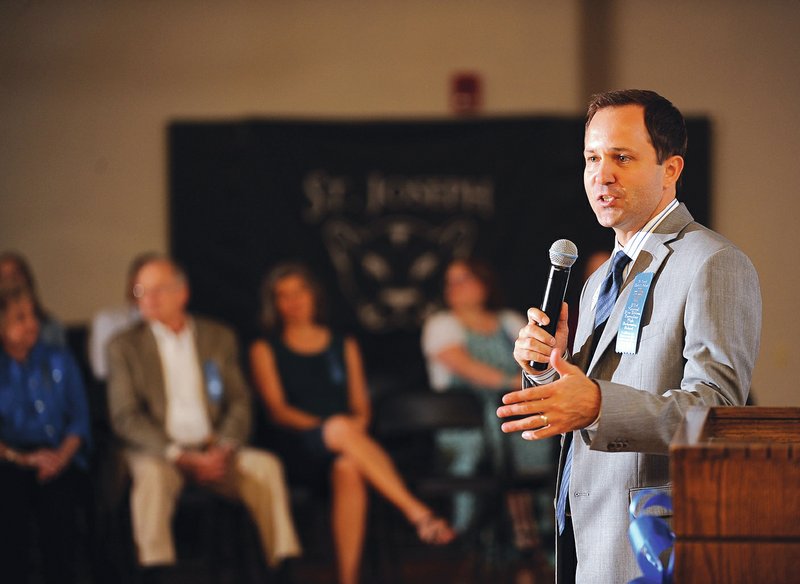 FAYETTEVILLE -- Students at St. Joseph Catholic School cheered and applauded when they heard the U.S. Department of Education named them a 2014 Blue Ribbon School.

It's the first private school in Northwest Arkansas and the third statewide in the 32-year history of the national program to be included on the list of high performing, exemplary schools based on test scores and other factors.

Motto: “I will try my best every day to learn, to love others and to act like Jesus.”

Eastside Elementary School in Rogers was the other school in the area recognized Tuesday.

St. Joseph officials turned the occasion into a celebration with several dignitaries, church officials and former teachers joining the event in the school gymnasium. The school has 320 students in prekindergarten through eighth grade.

Mayor Lioneld Jordan said the students had made an "outstanding accomplishment."

Third District Rep. Steve Womack, R-Rogers, said, "This is a terrific honor. You are America's next greatest generation."

Collins and Womack are running for re-election this year.

The Council for American Private Education recommended St. Joseph for the recognition because of its strong academic showing on standardized testing. The students in first through seventh grades take the Stanford 10 exam, published by the council, Pohlmeier said.

Assistant Principal Mark Wilburn said the students scored in the top 15 percent in the country in math and literacy in four of the past five years. Wilburn said he and a committee of teachers submitted a 30-page application detailing the school's curriculum, instruction and use of assessment.

"This confirms what we have known for years," Wilburn said.

The program honors public and private elementary, middle, and high schools where students either achieve very high learning standards or are making notable improvements in closing the achievement gap, according to a news release from the national education department. Some 344 schools nationally received the recognition Tuesday.