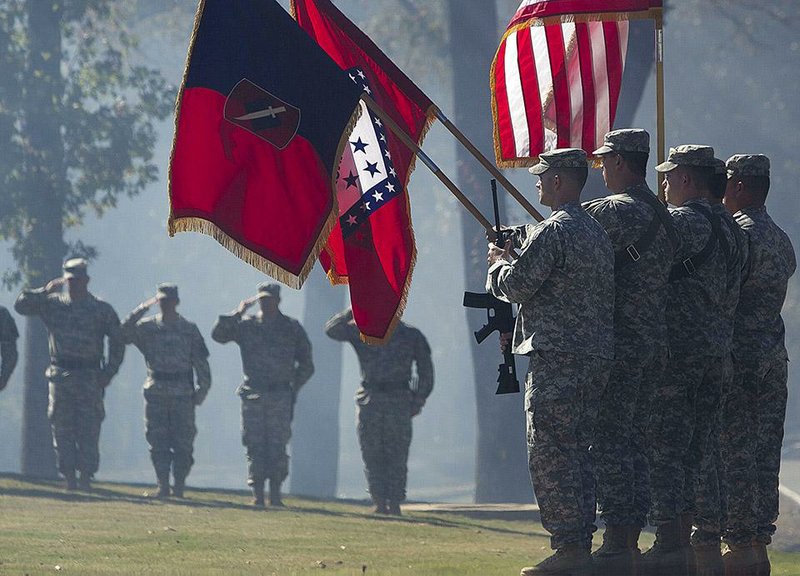 Arkansas Democrat-Gazette/BENJAMIN KRAIN --11/1/2014-- Members of the 39th Infantry Brigade Combet Team participate in a Change of Command Ceremony at Camp Robinson in North Little Rock on Saturday. Col. Michael E Spraggins replaced Col. John Mickey Stewart as the new Commander of the 39th Brigade which has over 40 units located across the state.

Command changed hands at one of the four Arkansas Army National Guard brigades Saturday during a ceremony at which officials lauded the incoming and outgoing leaders' experience and warned of the effect of impending federal defense cuts on the brigade.

Col. Mike Spraggins took the helm of the 39th Infantry Brigade Combat Team at Camp Robinson, which makes up most of the nearly 800-person Arkansas Army National Guard, from the commander of 21/2 years, Col. John "Mickey" Stewart.

Spraggins, 44, said the military faces cuts during an uncertain time when the nation is "war weary," but when the military also must be prepared for the possibility of major combat.

The brigade will be prepared for whatever is to come, he said.

The cuts are the result of the federal Budget Control Act of 2011, which calls for $487 billion in cuts to the Defense Department. In 2013, the Army announced that it would shrink its active-duty component, as well as its Reserve and National Guard.

"It's a fight for our existence, and we must make sure we are ready," Stewart told the crowd Saturday. Stewart, who worked with Spraggins while the two served in Iraq, said Spraggins would be prepared for the job.

"We are under fiscal constraints, and the people that have threatened the United States have not gone away," Arkansas Army National Guard Brig. Gen. Patricia Anslow told Saturday's crowd. Anslow said she believes Spraggins' experience makes him the right leader to handle the brigade's challenges.

After the ceremony, Spraggins said he plans to have the brigade train locally to save money. Instead of going to Fort Chaffee or another location, the unit will train in North Little Rock and work with public and private landowners to train on their land.

Spraggins said the change would be a win-win for the brigade and the community, because it would save money and enhance the National Guard's relationship with residents.

The biggest change in the National Guard has been an increased "tempo" since Spraggins joined in 1990, he said. Additional training, such as sexual harassment/assault response and prevention, has increased the Guard's workload, he said.

Spraggins, of Hot Springs, is a graduate of Ouachita Baptist University, according to his National Guard biography. From 2003-05, he was the brigade fire support officer for the 39th Infantry Brigade during Operation Iraqi Freedom II.

In 2008, Spraggins returned to Iraq, where he supervised basic life support operations for nearly 20,000 people at Camp Taji. He has most recently served as the deputy commanding officer to Stewart.

Spraggins is also the principal of Bismarck High School.