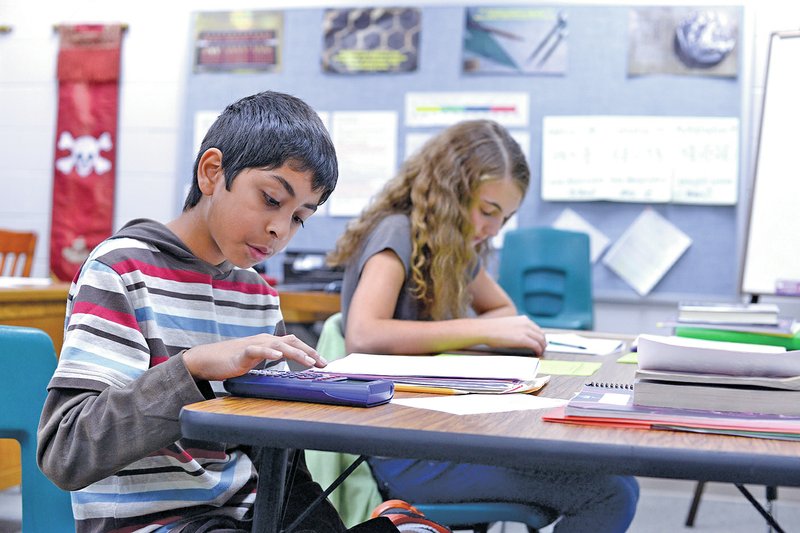 Opposition to Common Core education standards has formed in Arkansas, and organizers recently hosted a meeting in Fayetteville.

Ten people attended, including five educators who said they supported the standards.

Arkansas Against Common Core is a grassroots organization to get legislators to either repeal Common Core or declare a moratorium on its use in Arkansas schools.

Some 46 states and the District of Columbia adopted Common Core State Standards in 2009 and 2010. The standards define the knowledge and skills students should have to complete high school and be ready to tackle college or start their careers. The Arkansas State Board of Education adopted the standards in 2010. Implementation has been phased into kindergarten through 12th grade for the last three years.

Indiana, South Carolina and Oklahoma have pulled out of Common Core. Several more states are considering whether to forgo its accompanying assessment from the Partnership for Assessment of Readiness for College and Career.

Karen Lamoureaux of Maumelle is a spokesman for the group. Asked about membership, she said the group has more than 7,100 likes on its Facebook page. There is also a website, she added. The website has a page listing 10 activities opponents can do. There's also a link to a petition requesting Arkansas leave Common Core. The petition has more than 1,700 signatures, according to the website counter. The Facebook page was created in March 2013.

Lamoreaux said Arkansas Against Common Core fears residents are losing local control of their schools as that control shifts more to the federal and state government in areas such as standards, curriculum and assessments.

They fear the federal government is attempting to build a national database of information about students based on personal and demographic information gathered in the testing process. Testing personnel don't need to know students' religious preference or anything else, Lamoreaux said.

The Arkansas opponents also dislike the emphasis on reading nonfiction, a suggested reading list and the imposition of math standards they think are too stringent for younger children.

Melody Morgan, director of student assessment at the Arkansas Department of Education, said the Common Core assessment includes academic content only and doesn't require students to provide information on religion, family income or other personal topics. No student data is shared with the U.S. Education Department, she added.

The evidence of federal and state government intrusion starts with the copyright of the Common Core State Standards held by two Washington-based organizations, Lamoreaux said. The standards have federal stature because they are copyrighted by the National Governors Association and the Council of Chief State School Officers. They also object to millions of dollars in support from former Microsoft Chairman Bill Gates and others, claiming Gates' money is an effort to buy education reform.

Rep. Randy Alexander, R-Springdale, wants Common Core repealed in Arkansas. Alexander said he first learned about Common Core in 2013 after which he attended a national conference and heard a lot of concern from parents, especially about math. He sees Common Core being used by the federal government to take over kindergarten through 12th-grade education.

He states "cash-strapped schools" adopted the standards because the U.S. Department of Education offered grants.

Local communities have no opportunity to even tweak the standards because of the national copyright, Alexander said.

Oklahoma Gov. Mary Fallin said when she signed the legislation to repeal Common Core she was doing so because of the federal intrusion into the states' business.

Grace Lewis of Rosebud, the founder of Arkansas Against Common Core, said the issue is multipartisan with both conservatives and liberals in opposition. Liberals tend to oppose Common Core because of the assessments while conservatives mostly don't like how the standards were developed without local input.

Most states using Common Core standards have some sort of grassroots movement against them, but there's no overarching reason for the opposition, Lewis said.

Former West Virginia Gov. Bob Wise, a leading supporter of Common Core from the beginning, said the standards were written under the umbrella of the governors association and the council of school officers. Fallin is chairman of the governors association and Gov. Mike Beebe of Arkansas is a member of the organization's executive committee. The council of school officers is an organization of heads of state education departments that governs prekindergarten, elementary and secondary operations in their states.

Neither the governors organization nor the school officers group has ties to the federal Education Department except as watchdogs, Wise said. He added last week the talk of uniform standards began nearly 30 years ago when George H.W. Bush was president.

"Common Core came out of the states coming together," Wise said. The first meeting was called in 2006 by former North Carolina Gov. Jim Hunt, who invited school leaders from around the country to his state.

"That was three years before Gates showed up," Wise said. Attendees at that first meeting agreed the states should develop a set of standards. At the time, most states didn't set their own standards high enough, he said. Some 40 states agreed to the process and goal in principal in 2009.

"The early support showed the great hunger by the states to have higher and more rigorous standards that students could strive for," said Wise, who now heads the Alliance for Excellent Education, a national education policy organization dedicated to high school reform. "Clearly, this has been a state-run initiative," he said.

Brenda Gullett of Fayetteville said the Arkansas State Board of Education approved the standards in 2010. Lamoreaux said during her Fayetteville presentation the Legislature was left out of the loop in the approval of the standards. Gullett said Arkansas law gives the State Board the authority to adopt standards, curriculum and assessments.

The local school district still has control over the curriculum, Gullett said.

"This is the basic minimum of what teachers are supposed to do," she said. "A teacher or district can go above or beyond the standards."

Supporters point to a distinct difference between standards, curriculum and assessment.

Robert Rothman, a senior fellow at the Alliance for Excellent Education, said standards are a series of statements on what students need to know at each grade level. Curriculum is what the teachers do to get students to that point, he said. Assessments make the standards real, Wise said.

Susan Richmond, a literacy specialist with the Northwest Arkansas Education Services Cooperative in Farmington, said Arkansas teachers and school districts have a greater choice in resources because one of the largest states in the country, California, adopted Common Core.

Textbooks and other classroom material are often written to match the standards of larger states with larger buying power. States such as Arkansas buy the same material, but may have to revise portions that don't fit their standards. Common Core gives teachers a much greater selection of resources because the same standards in California apply to Arkansas, Richmond said.

"There are way more choices in textbooks than we've had before," said Kelli Dougan, a math specialist at the Northwest Arkansas Education Services Cooperative.

Opponents are concerned over a greater use of nonfiction literature. The standards require 50 percent of the literature read in elementary school and at least 70 percent in secondary schools be nonfiction.

"It's an integration of more nonfiction literature in science and social studies," said Sandra Taylor, director of K-12 English Language Arts in the Fayetteville School District. "We aren't using anything different, and students aren't exposed to that much more" in the area of nonfiction literature."

Students are taught different strategies to make each genre of literature more meaningful, Taylor said. Students are still getting poetry and Shakespeare as well as reading the more technical or nonfiction literature.

Kay Jacoby, executive director of curriculum, instruction, accountability and assessment in Fayetteville, said a freshman in college is more likely to read a technical manual for a course. A student in a workplace training program is probably reading a technical manual that exceeds the college level, she added.

"That's another reason for the nonfiction emphasis," Jacoby said.

Lamoreaux said she withdrew her son from his public school in Maumelle because he was so upset over the math and the accompanying homework. He's now homeschooled.

The math, she said, is "developmentally and cognitively inappropriate for young children. The third and fourth grades seem to be the most disruptive. They are asked to do math in a way they are not wired to do."

Lewis said the math portion, particularly abstract thinking, also was very difficult for her son. He was enrolled in the Arkansas Virtual Academy; now he's homeschooled. Children in the fourth grade or younger are still in a concrete thinking stage and cannot grasp the abstract thinking set forth in Common Core standards, she said.

Dougan said students are better prepared for college courses as a result of Common Core.

"They are leaving school with a lot more math, learned to a higher degree," she said.

She disagreed math skills required in the new standards are inappropriate for elementary age students. The standards want students to understand why two times three equals six before they memorize the multiplication table.

Alexander who lost his bid for re-election in the May primary, said he has received "lots of calls" from teachers who privately say they are opposed to the new standards but are afraid to speak up out of fear of losing their jobs.

Teachers who attended Lamoreaux's meeting in Fayetteville said the new standards are better than anything else they have seen because the focus is on delving deeper into a subject with fewer standards to incorporate in their teaching. One teacher commented Common Core wasn't perfect, but it's the best thing to come forward in a long time.

"Why would we not want to compare our students' performance to other states? We still have to have tests and standards and curriculum," Dougan said. "These standards are going to help Arkansas. Our students are on a more level playing field with the world, and they are getting a better education."