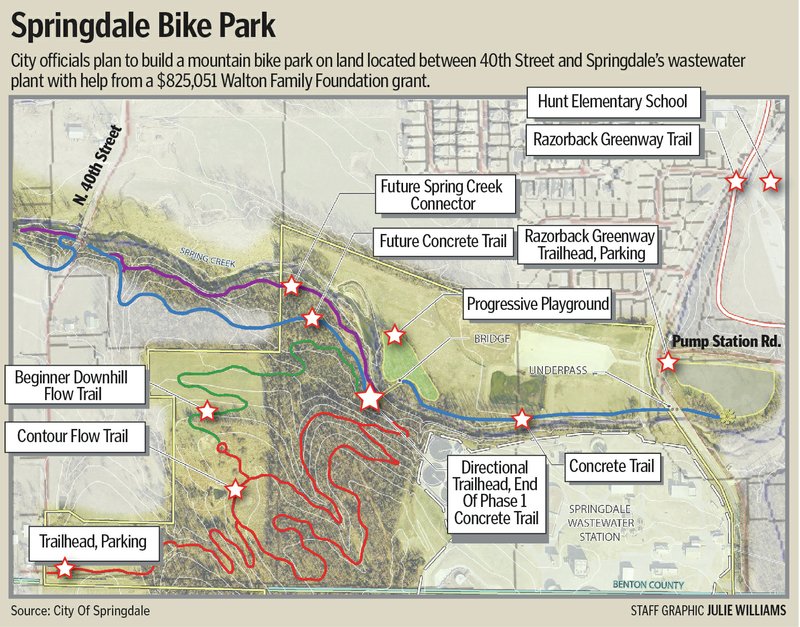 SPRINGDALE -- A mountain bike trail planned by city officials will bring people to the area, a bike proponent said.

The trail in Springdale will add to parks in the area to draw mountain bikers, said Steve Schneider, vice president of Ozark Off Road Cyclists.

Status of trails in Springdale

"We have discussed forming a Northwest Arkansas series of races," Schneider said. "It could bring people to Springdale and the whole area."

The trail is to be in a planned bike park between the city wastewater treatment plant at 2910 Silent Grove Road and 40th Street, according to plans. The City Council approved building the trail June 10 using a $825,051 Walton Family Foundation grant. The value of the land will serve as part of the match for the grant, said Patsy Christie, city director of planning.

The land is owned by the Springdale Water and Sewer Commission. The commission approved deeding the land valued at $501,254 to the city. The land would revert to the commission if its use changed, said Chris Weiser, commission chairman.

The city will spend $323,797 on construction to complete the match, Christie said. The cost of the project will be $1.65 million, according to a contract with Progressive Trail Design. The money for construction will come from the city's Park Acquisition Fund, said Mayor Doug Sprouse.

The trail will be similar to the Slaughter Pen mountain bike trail in Bentonville, said Alan Pugh, city director of engineering. Progressive designed that trail as well as the Lake Atalanta trail being built in Rogers, he said.

Construction of the Springdale bike park is the first phase of plans for bike trails, Weiser said. The commission owns more land west of Interstate 49 that could be the site of another mountain bike trail, he said. The site is southwest of the intersection of Wagon Wheel Road and 56th Street.

A connecting trail would run from the Lake Springdale trail head on the Razorback Greenway to the Phase 2 section, Weiser said. That trail would go under I-49, possibly where it crosses Spring Creek, he said.

"The trail to Phase 2 would bring us to within a mile of the city's northwest park," Weiser said. "We could have a connection from that park to the greenway."

The Razorback Greenway is a 36-mile trail being built between Fayetteville and Bentonville.

"A lot of people who could move to the area are looking for an outdoor lifestyle," Schneider said. "These trails would bring that to the area. I'm very excited. Springdale is developing good momentum."