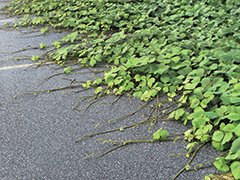 Kudzu, the invasive vine infamous throughout the South, has colonized Northwest Arkansas.

Local experts said kudzu's tendrils won't be swallowing up any towns around here, though, thanks to a relatively dry and hot climate. Other invasive plants, such as varieties of honeysuckle and the mimosa tree, are a more serious problem.

A plant is invasive if it has been introduced from another region and causes harm to native plants, such as by soaking up sunlight, physically overcoming plants or releasing toxins. Most were originally ornamental or had other uses.

• Kudzu: A fast-growing, viny plant with broad, smooth leaves; reported from Texas to New England and strongly resistant to physical and chemical removal

• Sericea lespedeza: Grows with a straight stalk up to a person’s height with small, narrow leaves, and can crowd out other plants; reported from the Gulf of Mexico to Canada

• Privet: A bush with oval leaves and clusters of white flowers; reproduces rapidly

• Honeysuckle: A bush with trumpet-shaped flowers and a distinctive sweet smell; leafs early and is resistant to herbicide

• Tree of Heaven: Long, almond-shaped leaves arranged like a palm frond; reported from Arkansas to Maine

Whatever the plant, the fight against it is constant, officials in cities and state parks said.

"It's a big task," said Mark Clippinger, superintendent of Hobbs State Park and Conservation Area in Benton County. "You either throw up your hands and get frustrated with it, or you try to deal with it."

The federal government uses the term "invasive" for any species introduced to a new habitat, often through human activity, that can cause harm to its new home.

Invasive plants can come in any form. Trees of heaven and mimosa trees, bedecked with pink, firework-like blossoms, join sweet-smelling honeysuckle and other shrubs on the list, as well as vines such as kudzu.

Notably, all of the plants causing problems here are native to eastern Asia, and many of them were brought deliberately to the Americas. Farmers, for example, were encouraged to put kudzu's speedy growth to use for erosion control and livestock feed starting in the late 1800s. Other plants were brought in for their looks or scents.

Kudzu soon grew beyond farmers' control. Now the plant is widely known for covering cars and houses left alone too long. It can choke trees and entire hills in a thick, green blanket, earning the nickname "the vine that ate the South."

"As they say, it can strangle a small child," joked Garry McDonald, assistant professor of horticulture at the University of Arkansas. "It just got too happy, got a little too much at home, and just started smothering everything."

Protected by tough and widespread root systems, the plant can take years of repeated cutting and herbicide application to remove fully, McDonald said.

Kudzu has been in Hobbs for at least three decades, Clippinger said. Other officials confirmed its presence around Fayetteville, including around Lake Wedington in the Washington County segment of the Ozark National Forest. Bentonville, Rogers and Springdale seem to have avoided the worst invasive plants, officials there said.

Kudzu grew in 25 acres of the Wedington recreational area around 2005, said Tracy Farley with the U.S. Forest Service. Herbicides and prescribed fires cut the affected area by 99 percent.

Compared to Georgia or other Deep South states, Northwest Arkansas fortunately appears to be too dry to allow kudzu to thrive, McDonald and others agreed.

"You're just reaching its climatic limit here," McDonald said. "Once you start getting to its western edge, I think a combination of dry summers and high temperatures kind of keeps it in check."

Still, where the plant grows, it persists, Clippinger said.

"We have an area that's coming back on us" along Arkansas 12, he said. "This isn't a one-time shot."

Invaders other than kudzu are the bigger battle, officials said.

Clippinger said the primary enemy in Hobbs is a fairly short plant called sericea lespedeza, or Chinese bushclover, which grows in dense clusters of straight stalks coated in small, thin leaves. It can completely crowd out native wildflowers and other plants.

"This lespedeza thing just caught us off guard" less than a decade ago, Clippinger said. "It's pretty well everywhere."

The plants can release thousands of seeds in a season, so there's too much to physically pull out, he added. Garlic mustard, mimosa trees and other plants need to be treated as well.

Direct herbicide applications are the weapon of choice. Any application must be careful to avoid going overboard and hurting native species, Clippinger and Farley said.

"We're very cautious about the use," Farley said, "but it's a very good tool to have in the toolbox."

Within Fayetteville, urban forester Derek Linn has seen large numbers of bush honeysuckle and a plant called the tree of heaven, which has almond-shaped leaves arranged like a fern frond. Like kudzu, these plants can take more than a year to kill, Linn said.

Both can put out leaves in late winter, grabbing sunlight from native plants, and can pop up anywhere, he said. Climate change could worsen the problem.

Several studies in the past few years have found animal and plant ranges are already shifting as the globe gradually warms. A 2011 analysis published in Science found species are shifting toward the poles at several miles per decade, for example. New invasive plants therefore could make their way here, Linn said.

"It's going to be an ongoing challenge," he said. "I think we're going to have to continue staying on our toes."