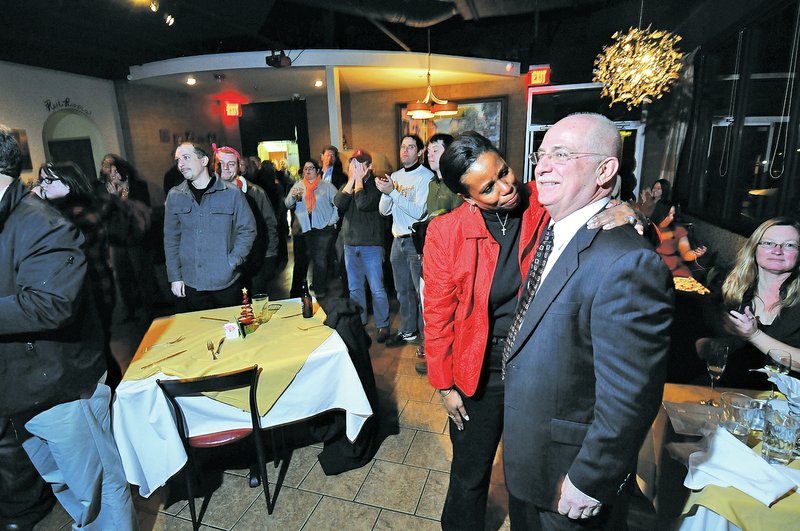 According to final but unofficial results from the Washington County Election Commission, 7,523 voters (52 percent) cast ballots to repeal the ordinance and 7,040 voters (48 percent) voted against repeal.

The ordinance, which the City Council approved Aug. 20 to prohibit local acts of discrimination based on someone's sexual orientation, gender identity and a number of other characteristics, will not take effect.

"The entire ordinance process was the problem," Travis Story, general counsel for the group Repeal 119, said from a watch party Tuesday night at the Hilton Garden Inn off Wedington Drive. "The City Council never ... brought all sides together to see if there was a problem and, if a problem exists, what we can do about that problem.

"Residents of Fayetteville said no to (the ordinance) because it was a bad law."

Repeal 119 submitted signatures from more than 4,200 residents to the City Clerk's office Sept. 20 to put the Civil Rights Administration ordinance to a public vote.

Alderman Matthew Petty, the ordinance's sponsor, said he was disappointed but not discouraged after results were announced at Fresco Cafe & Pub, where supporters of the group Keep Fayetteville Fair gathered.

"We believe that we were on the right side of history," Petty said. "And if we're going to win the hearts and minds of people on the other side of this issue, we need to remember that and remember that they're brothers and sisters of Fayetteville, too."

According to the Election Commission, nearly 14,600 residents voted in Tuesday's special election. There are 49,559 registered voters in Fayetteville, making turnout for the public referendum about 29 percent.

By comparison, 21,457 city residents voted whether to raise the state's minimum wage in the Nov. 4 general election ballot that included several issues and federal, state, county and city candidates.

Just after 1:15 p.m. Tuesday, about 600 voters had cast ballots at Trinity Fellowship Assembly of God on Rolling Hills Drive, one of 17 polling sites. Shannon Harvey said she voted for repeal "mainly just as protection for faith-based organizations."

"I believe in less government intrusion in public and private affairs," Harvey said.

At the polling site at Central United Methodist Church, Joel Hersh said he thought the ordinance was poorly thought-out and poorly written.

"The objectives were inappropriate," Hersh said. "I thought it was overreaching from our leaders."

Petty said Tuesday night it's too soon to tell if the City Council will consider a revised version of a similar ordinance.

"We're going to consider all options," he said.

"This is the first round, but it won't be the last round," said Mayor Lioneld Jordan, who has publicly endorsed the ordinance. "I would have liked to have seen it go differently, but that doesn't mean we can't go back and try something again eventually."

He added, "This was a vote of the people, and I respect that vote and we'll work with that."

Tuesday's election results were similar to a 1998 referendum on a City Council-approved Human Dignity resolution. The resolution would have added "familial status" and "sexual orientation" to Fayetteville's nondiscrimination policy for city employees. When it went to a public referendum, the resolution was overturned by a vote of 7,822 (58 percent) to 5,736 (42 percent).