On her path from Ireland to Texas to Arkansas, Lorraine Frazier has always loved studying, and though she has seen great success as dean of the nursing college at UAMS, she is still a dedicated resear by JOE STUMPE SPECIAL TO THE DEMOCRAT-GAZETTE | August 31, 2014 at 3:32 a.m. 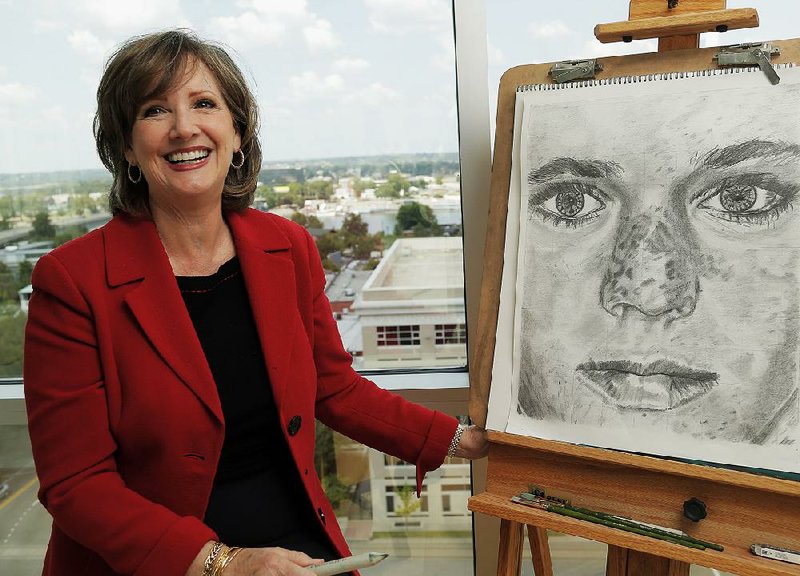 Lorraine Quinn Frazier is dean of the nursing college at UAMS.

Her father, Francis Quinn, died at age 50 of chronic kidney disease after years of dialysis treatment. Her daughter, Molly, now 31, lives in a home for the mentally and physically disabled, having never spoken or communicated with anyone in the usual sense of the word.

Those experiences didn’t shake Frazier’s faith in health care. Rather, they strengthened her resolve to improve it.

“My life has been about nursing,” Frazier, dean of the College of Nursing at the University of Arkansas for Medical Sciences, said. “That has been my life and it will be my life, because I see it makes a difference in patient outcomes.”

By nursing, Frazier doesn’t mean just bedside care, although that component is as crucial as ever. She means medical attendants who perform team-oriented medical care and contribute to groundbreaking research as well.

“The things that we focus on are going to change the health of people in Arkansas,” Frazier said. “I can’t say that with more passion.”

Lorraine Frazier’s husband, David, calls her “an adventurer” and “dreamer” and believes she gets it from her father.

“He was always very ambitious, full of energy and ideas and trying to better himself all the time. She has that Irish outlook on life.”

Frazier, 58, was born in Kells, a village in Northern Ireland not far from Belfast. Her father, Francis Patrick Quinn, moved his family to Texas when Lorraine was 8, after some friends told Quinn he might like it there.

Frazier remembers being stunned by the heat in Texas, and also by the news of President John F. Kennedy’s assassination in Dallas. A police officer in Ireland, Francis Quinn tried his hand at several things in the United States, eventually finding a good career building oil drilling platforms with Brown & Root (now KBR), the worldwide, Houston-based construction company.

But he also developed a chronic kidney disease, which his daughter believes was brought on by his failure to get treatment for strep throat, “which is why I believe everybody should have health care.”

Frazier calls it a “family illness” because of the way it affected everyone around him. It also inspired her.

“The doctors and nurses had all the answers. My family needed those answers. I thought if I could know everything they knew, I’d have answers for my family. For me, studying [nursing] was a way to understand our life.”

Francis Quinn took his family back to Northern Ireland when Lorraine was in junior high school. By then, “The Troubles” — as Northern Ireland’s political and ethnic fighting were called — had started. When an opportunity in Malaysia opened up, Quinn moved his family there. That’s where Frazier finished high school, receiving her diploma in the mail.

Frazier’s parents wouldn’t let her train for nursing in Ireland because of the violence wracking the country. Instead, she returned to Texas, earning an associate degree in nursing and meeting David at a church function.

“I’d be less than honest if I didn’t say she was attractive,” David Frazier said. “That was definitely the first thing.”

Lorraine says David went to fetch her a cold drink “and has been taking care of me ever since.”

The first place he took her was Duncan, Okla., where Frazier worked in nursing homes and the local hospital. “I still remember my patients’ names,” she said.

Francis Quinn died in 1982. Molly was born six months later. By the time she was 8 months old, Frazier realized Molly was not reacting to stimuli like other children. Doctors said there was a chance she would develop normally later. She did not.

The exact cause of Molly’s disability has never been determined, although it probably involves a genetic component. David Frazier said there was “a lot of challenge and disappointment in having a special needs kid” and it took time for the couple to accept that she would never lead a normal life.

“We had a physician who advised us, ‘Hey, what you need to do is try to make her happy, and comfortable, and stop trying to search for an answer or cure because you’re not going to find one.”

Lorraine Frazier said her mother told her to learn from her own experience.

“She worried about my dad, as you can imagine. She told me, ‘You know, Lorraine, you can spend the rest of your life worrying about Molly. I cried so many tears they were hitting my shoes, and it didn’t do one thing. Make it a positive thing and don’t let it destroy your life.’ That gave me permission to make Molly’s legacy a positive thing. I’ll never be able to repay her.

“Molly’s legacy — she’s been an educator for us,” Lorraine Frazier said. “She drives me. I want every nurse, when they graduate under my watch, to be able to take care of any vulnerable patient, whether they’re elderly or disabled. They’ll be the type of nurse we’d want there.”

After earning her bachelor’s degree in Oklahoma, Frazier went on to earn her master’s of science and doctoral degrees in nursing from the University of Texas at Houston.

“She’s sort of every teacher’s and professor’s dream,” David Frazier said. “She’s a bookworm from the start.”

She did put her academic career on the back burner for two years to travel with her husband on a series of foreign assignments. She doesn’t consider the time wasted.

“I went with him and it was an amazing time. It was tough to put my career on hold, but I benefited a lot. I know the world.”

At UT-Houston, Lorraine Frazier worked as a professor and then, from 2008-2011, assistant dean and chairman of the nursing department, which is about twice the size of the one at UAMS. She also spent a decade as the first project director of TexGen Research, a joint genetics project of the University of Texas at Houston, the University of Texas M.D. Anderson Cancer Center, and Baylor College of Medicine. The centerpiece of TexGen was a biobank, a depository of biological samples, that collected DNA on a voluntary basis from cardiovascular and cancer patients, to be used for research in those areas.

Frazier has been principal investigator on more than a dozen research grants totaling millions of dollars, winning several awards along the way, and authoring or co-authoring scores of research papers and book chapters.

Because of her work with TexGen, she has also been a consultant to other biobanks across the country, and has lectured from Mexico to Tokyo.

Frazier probably would have been content to remain at the University of Texas if not for a fellowship with the Robert Wood Johnson Foundation, the nation’s largest philanthropy devoted to public health.

Halfway into that three-year fellowship, one of her advisers told her the best way to advance her career would be to take a job elsewhere.

Frazier said she was “upset” by the suggestion but eventually understood its wisdom. “There’s a difference between waiting and taking control.”

When a search committee contacted her about the UAMS job, she listened. She interviewed, was offered the job, and accepted, starting in the fall of 2011.

The move meant leaving behind her husband and a life she loved in Houston. Frazier said her husband “knows how important my calling is to me.”

David Frazier, chief information security officer for Halliburton, the Houston-based oil field services company, said he didn’t look forward to being separated, but “it’s not like there are a hundred of these jobs in every city. You definitely have to go where the opportunity is.”

The two take turns making the commute to see each other. They’ve made a second set of friends in Little Rock, where Lorraine Frazier lives in a downtown condo. David Frazier says one of his wife’s loves is to grab a picnic lunch and “watch the clouds go by on the Arkansas River.”

“We are LATs — living apart together,” Lorraine Frazier said. “I looked it up.”

UAMS officials give Frazier high marks for her three-year tenure.

“I believe Lorraine has really brought the college together in terms of the faculty working well together,” Chancellor Dr. Dan Rahn said.

That’s reflected in the performance of the students, which Rahn acknowledged had been a concern of university officials before her arrival.

“The anchor of a college of nursing is the bachelor degree, and the students in that program are doing exceptionally well. The number of applicants is up, the credentials of the [applicant] pool are up, and just this last time, 95 percent of the graduating students passed the national exam for licensure. That’s really terrific.”

Frazier also launched a doctor of nursing practice degree and has embraced the interprofessional approach that UAMS is taking.

“She’s been a strong supporter of that endeavor and really has welcomed the opportunity to collaborate with the other deans to fulfill the UAMS mission, rather than working separately,” said Dr. Jeanne Heard, the provost.

“When you’re a new dean, you want to make your own mark, which is important. She’s going to make her own mark, but she’s also partnering with others to move UAMS forward.”

Heard said Frazier approaches challenges in a positive way but “not this frivolously rah-rah stuff.

“It’s wonderful to have that because UAMS faces a lot of difficulties in this present funding environment. One could be down if one chose to, but we can’t have that.”

She’s still a researcher, Heard noted, recalling Frazier’s response when she was asked to head the search committee for a new UAMS library director.

“She remarked, ‘Well, I’ve never chaired a library director search. I need to learn as much about it as I can.”

Frazier became a U.S. citizen after her marriage, but her husband said Ireland “still has a big place in her heart. I would say it shapes her personality. The Irish are dreamers, they’re writers, they’re creative people.”

What Frazier is helping create now is a new type of nursing college at UAMS.

She wants more UAMS nursing students to pursue advanced degrees and become leaders in their fields. The college has about 750 students, as many as it can handle with the current faculty. Frazier said a “whole lot of pieces” have gone into increasing applicants, including a branding campaign built around the phrase, “I choose UAMS.”

She instituted a “white coat” ceremony to mark the point when nursing students start working with patients rather than mannequins, emphasizing the importance of empathy.

“This year we had a patient speak to them. She did a fantastic job,” Frazier said.

Another focus is on recruiting researchers to the faculty. They’ll look into things like how to help people quit smoking and improving the health of the elderly.

“That’s the future that UAMS wants. Nursing is a big, big part of that.”