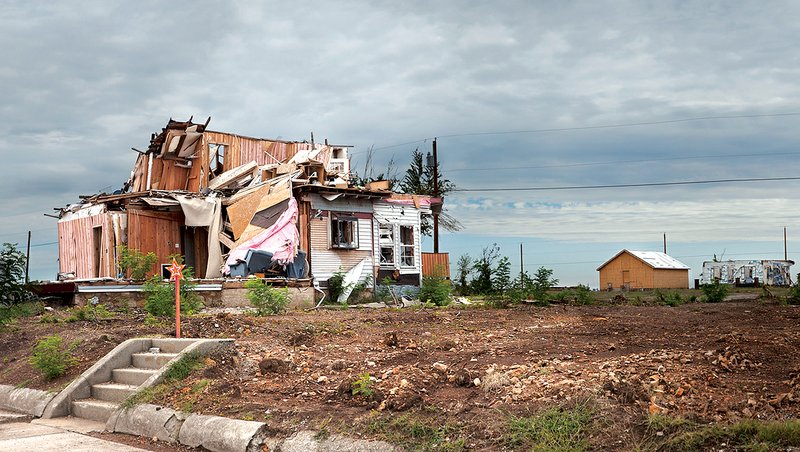 He didn't go there to shoot.

In 2011, Dan Snow stood in front of utter devastation. He was in Joplin, Mo., where two months before an E5 tornado had ravaged the city, leaving 161 people dead and thousands homeless. Responding in an effort to help, Snow had traveled with his church group to Joplin. He didn't expect to do anything else.

"I had no intent to take photographs," he say. "I just was going with my church. Someone we were working with suggested that I bring my camera."

Luckily he did. During a lunch break, Snow wandered down the street, coming across an eerie sight that still moves him. A house stood almost completely in tact, he said. Nearly every other street was cleared by the tornado or already bulldozed, but this house stood, broken and exposed.

"There was this one house -- it was just standing there," he says. "And there was a star in front of it."

The star's significance was not lost on Snow. A local church had erected the stars on street corners and in front of homes, schools and businesses that had suffered a loss of life, he says, and they were everywhere.

"This is how we deal with such tragedy," he says. "Something about that house really stood out to me. It was the star. There were 10 stars where I was standing when I took that photo."

The Springdale native hadn't expected to take a photo that day much like he didn't expect to go into photography at all. He started his art career in painting and drawing at NorthWest Arkansas Community College at the age of 18. It was in his first graphic design class with professor Victor Chalfant that his mind changed, he says.

"I fell in love with photography right there," he says. "I just dove right in and didn't look back. I had amazing instructors along the way who really opened my eyes to this amazing art."

His love affair took him from NWACC to the Art Institute of Colorado, where he earned a bachelor of arts degree in photography before heading to Louisiana Tech University for his master of fine arts in photography in 2012.

Soon after, he was back in Northwest Arkansas, camera in hand.

"Victor picked me up as an adjunct at NWACC," he says. "I teach photography and graphic design."

The photographer, who has worked with Bedford Camera, can also be found teaching at the New Design School in Fayetteville when not at home with his other great love -- 14-month-old American bulldog, Maddie. He says teaching reminds him why he fell in love with the art.

"The fundamentals class is always great," Snow says. "I realize that moment when photo was introduced to me. I see that, I remember that. It's such a pay-off for me. I love teaching lighting as well, but really, everything photography related is great to teach."

Snow will bring his knowledge, expertise and dramatic eye to the Arts Center of the Ozarks this month in a show called "Aftermath." Also on exhibit will be James Keltner's "Retrospective."

Snow's collection holds such photos as the one shot in Joplin, highlighting both the artist's passion for forensic photography and his sensitivity to the impact devastating events like the Joplin tornado can have on individuals.

"How do we get past such a horrible event?" he asks, wondering. "A lot of folks deal with grief in different ways. Sometimes we turn out backs and sometimes we build a memorial. But we move forward -- we have to. We have to do something to remember. We do so we can heal."

Print Headline: After The Storm