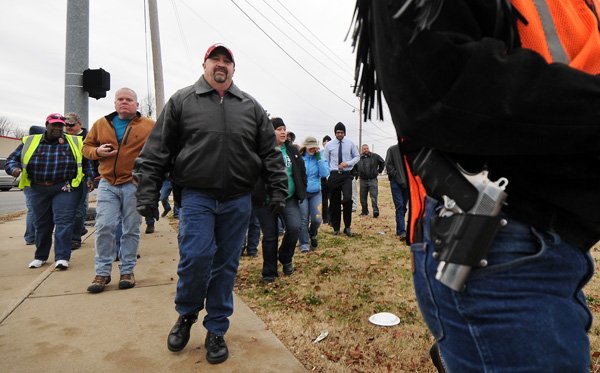 Marty Nelson, from Greenwood, left, follows behind Tony Asher, from Lincoln, who wears a Colt .45 cal pistol on his hip, while participating in a walk along North Thompson Street in Springdale celebrating a new state law, passed on August 16, legalizing open carry of firearms in Arkansas, on Saturday November 23, 2013. Several dozen gun rights supporters joined Northwest Carry, a group associated with Arkansas Carry, in walking a few blocks while openly wearing handguns. - Photo by Ben Goff

State law also allows a college employee who has a concealed handgun license to carry the gun on a campus where the governing body does not have a policy forbidding it.

Correction: A previous version of this story contained an outdated portion of state law. The error has been corrected.

This story is only available from the NWAonline archives. Stories can be purchased individually for $2.95. Click here to search for this story in the archives.