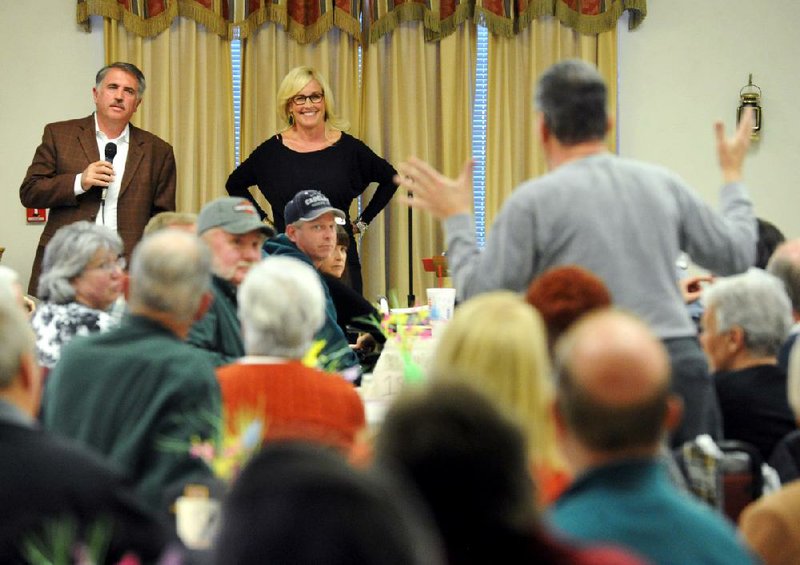 FORT SMITH - It is up to the people of Fort Smith to push for a solution to the trichloroethylene contamination that has plagued the neighborhoods around the closed Whirlpool Corp. plant, environmental activist Erin Brockovich said Tuesday.

Brockovich told a crowd of more than 200 people at the Fort Smith Senior Citizen Activity Center that the federal Environmental Protection Agency is not going to help them because it is understaffed, underpaid and overburdened.

“Let me tell you what the game changer is in a situation like this. It’s you,” she said.

She called on the audience, many of them former Whirlpool employees, to provide information to her website, www.brockovich. com, about what they know about pollution by Whirlpool and about the sickness that they and their families have experienced so that Brockovich and her associates can conduct an investigation and force Whirlpool to clean up the pollution that has lain untouched underground for decades.

Brockovich traveled to Fort Smith on Tuesday after Debbie Keith of 1804 Jacobs Ave. wrote to her last month about the groundwater under her neighborhood being contaminated with trichloroethylene.

Keith learned about the contamination on Jan. 10 when she and four other residents or property owners attended a meeting with Whirlpool representatives who informed the neighbors of the company’s intention to seek an ordinance from the Fort Smith city directors to ban drilling of water wells in the neighborhood. The company wanted to eliminate access to the contaminated groundwater under the surface of the neighborhood, according to Whirlpool officials.

City directors are scheduled to consider the ordinance today. But hours before Tuesday’s neighborhood meeting began, Jeff Noel, Whirlpool corporate vice president for communications and public affairs, asked to withdraw the ordinance until the company can hold public meetings on a long-term solution to the contamination and after the Arkansas Department of Environmental Quality approves such a plan.

In a letter to city Development Services Director Wally Bailey, Noel wrote that the ordinance may have left the impression that Whirlpool would do nothing more at the site once the ordinance passed.

“Whirlpool takes responsibility for the release from our plant and we are committed to handling the situation in an open and responsible manner,” he wrote. “We are committed to ongoing work withthe Arkansas Department of Environmental Quality to resolve this situation.”

Fort Smith City Administrator Ray Gosack said Tuesday he could not comment on whether the directors would withdraw the ordinance or whether he would recommend the company withdraw it.

He said there were things the directors would learn at the neighborhood meeting and at tonight’s directors meeting before they could decide how to act on the proposed ordinance. He said, among other things, that directors are supposed to hear from environmental quality officials tonight.

“It’s important to hear from them before any decision is made,” Gosack said.

Whirlpool officials told city directors last month that the trichloroethylene, which was used to clean metal refrigerator parts before assembly, was likely leaked into the groundwater at the plant gradually over time from the north end of the company’s property at 6400 Jenny Lind Road. The company has no record of a trichlorethylene spill, they said.

The company used the cleaner from 1967 to 1981 but did not discover the chemical in the groundwater until 2000, at which time officials notified the state environmental agency.

In testing, the company found the chemical has seeped north into the adjoining residential area. The approximately 35 homesbounded by Jacobs and Brazil avenues, Ferguson Street and Jenny Lind Road have been designated as the contaminated area.

Whirlpool closed the plant in June.

Since 2000, the company has been working with the department to determine the extent of the contamination and devise methods to clean it up. The two methods the company attempted last year to clean up the trichloroethylene - sucking it out of the ground and trying to neutralize it chemically - were unsuccessful.

Noel said Monday the proposed ordinance is precautionary and that the company would continue to work with the state to clean up the contamination.

Whirlpool is expected to submit a revised report on how it plans to deal with the contamination, according to Department of Environmental Quality spokesman Katherine Benenati. She gave no time frame for submission of the report.

Noel said Monday the chemical in the groundwater does not pose a threat to the neighborhood residents.

Bob Bowcock, an associate of Brockovich and founder of the environmental research company Integrated Resource Management of Claremont, Calif., told the crowd Tuesday he believes the plume of contamination under the affected neighborhood north of the plant is larger than Whirlpool has said and that it also affects the neighborhood south of the plant at 6400 Jenny Lind Road.

He said more testing would be done to determine the true extent of the contamination.

The chemical is believed to have been in the ground at least since the 1980s.

Bowcock and Brockovich said the problem with the trichloroethylene is not in the groundwater because the neighborhood is on city water and does not rely on groundwater for its drinking water.

The problem, Brockovich said, is with the vapor that can percolate up through the ground and into the homes where residents will inhale it. She said her team, which includes Bowcock’s company of scientists, will return to Fort Smith to test for vapor intrusion into homes as wellas conduct tests of the neighborhood south of the plant, which Bowcock said has not been tested by Whirlpool.

Bowcock also criticized Whirlpool’s study of thecontamination and efforts to resolve it as inadequate.

“The Whirlpool site as it sits today is in violation of the Clean Water Act like you’ve never seen before,” he said.

Brockovich and Bowcock also said Whirlpool has ruined the value of the property of those in the affected neighborhoods because the contamination will have to be disclosed to get mortgages, home insurance and to sell the property.

“They have condemned your property,” Bowcock said. “They have taken what is yours.”

Brockovich gained fame when she led the successful fight in the 1990s in a California groundwater contamination case against Pacific Gas and Electric. Since then,she has traveled the country helping communities on pollution issues. Brockovich’s work was the subject of the 2000 movie Erin Brockovich for which Julia Roberts received the Best Actress Academy Award for her portrayal of the activist.