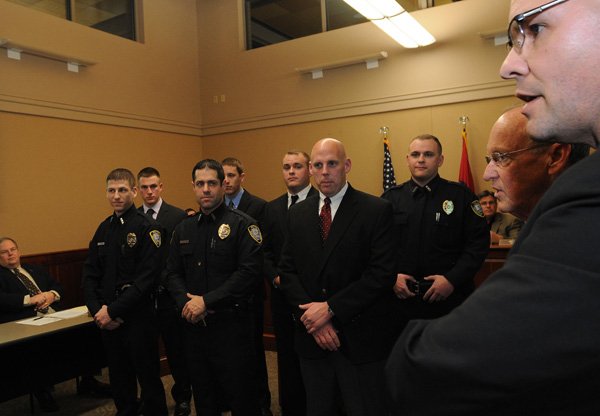 BENTONVILLE — The City Council voted to classify specialized training courses as a professional service at Tuesday’s meeting, waiving bidding for the courses in the future.

The meeting was the first for three new members — Roger Thomas, Leah Williams and Burton Head. The three were sworn in with other aldermen before the meeting.

• Awarded the bid for the expansion of Electric Department Substation C to BBC Electrical for $353,509.

Council members elected Chris Sooter, Ward 1, to be chairman of the City Council. Ed Austin, who held the Ward 3, Position 1 seat before being unseated by Williams, was the previous chairman.

Camille Thompson, city attorney, said reclassifying specialized training as a professional service allows the city to contract with the most qualified provider rather than lowest bidder.

Bill Burckart, Ward 3 alderman, said he feels the city gets a better price when it solicits bids.

The issue prompting the debate was an advanced electronics course for the Bomb Squad from WMDTech. Burckart said he had no problem waiving bidding on that individual course but felt it shouldn’t apply to all training courses.

Thompson said the city follows a specific procedure when selecting a company for professional services and works to reach an agreement for a reasonable price. The city seeks another option if the price is too high, she said.

The council voted 6-1 in favor of the reclassification. Burckart voted against the measure. Jim Grider, Ward 4 alderman, was absent.

The group awarded the training course to WMDTech of Nampa, Idaho, for $40,844. The course will be paid for through a $264,724 Homeland Security grant the council accepted Tuesday. The money will go to purchasing a robot, remote firing devices, electronics kits, tactical vests and helmets, communication sets and bomb suit for the squad.

Seven new officers were sworn in to the Bentonville Police Department early in the meeting. Five are replacing officers that left the department in December and January to take positions with the Benton County Sheriff’s Office. The others are helping fill slots opened up in the 2013 budget.

“We’re glad to have these individuals on our team,” McCaslin said.