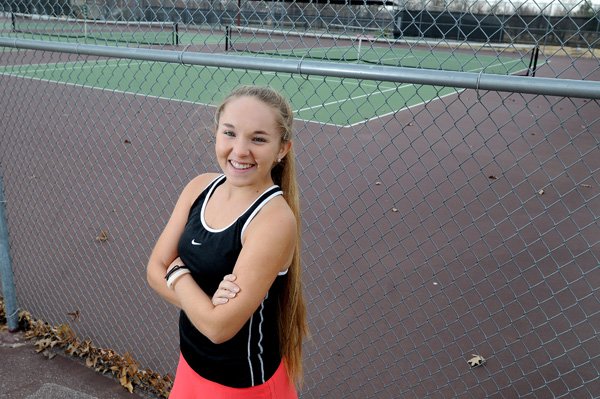 Teah Flynn, 15, a Farmington student, has spearheaded a tennis relay called “Keep the Ball in Motion, Rally and Give Back” as part of a larger fundraising effort to fight against cancer.

That’s the plan for the 15-year-old sophomore from Farmington, who’s organizing a tennis relay on Feb. 9 at Pinnacle Country Club in Rogers. The event is part of a larger fund-raising effort that could involve more than 100 tennis relays nationwide on the same day.

"*" The actual starting time is subject to change

The tennis relays will consist of up to six players an hour hitting tennis balls back-and-forth across the net for up to 12 hours. An entry fee of $10 per person is required and all proceeds will go to the Washington University School of Medicine in St. Louis, Mo. in their research against Genomic Cancer.

Flynn’s goal is to raise $720,000 if she can get 72,000 people to participate in tennis relays across the country on Feb. 9. She’s received pledges for more than 100 events and could receive more with five weeks left. In additon to Pinnacle Country Club in Rogers, tennis relays will also be held locally at Fayetteville Athletic Club and Memorial Park in Bentonville.

“Most of the people I’ve talked to are definitely on board with this idea because they know how many people are affected by cancer,” Flynn said. “Even if we don’t reach our goal, we can always try again next year. Hopefully, it’ll become an annual thing where we can some raise money every year.”

Flynn said she wanted to do something after watching a CBS Morning Show last July about the fight against cancer at the Washington University School of Medicine. Researchers there hope to make cancer treatable — not with chemotherapy or radiation — but by isolating and treating the affected gene.

Flynn came up with the idea of a tennis relay after a discussion with her grandmother, Daun L. Flynn.

“We were talking about world records and we wondered what the world record was for keeping a tennis ball in motion,” said Flynn, who has been playing tennis since she was six years old. “After I saw the story on genomic cancer research, everything clicked.”

Flynn has spearheaded the effort by sending out e-mails to tennis coaches and interested individuals and by speaking at events like area Rotary Club meetings. Flynn has sent out about 9,000 e-mails in bulk, by her own estimation.

“Teah is very mature for her age,” said Amanda Reimer, Flynn’s tennis coach at Farmington. “When she puts her mind to do something, she’s going to do it and it’s going to be done right.

“So, I’m not surprised at all that she’s putting this tennis relay together. I’m so excited for her.”

Flynn, who produces “My Kid’s Point of View” TV segments for CATV, said she’s received a lot of support from adults and her friends about her tennis project. She’s encouraged about the possibilities and hopes large numbers of people will participate the event regardless of their tennis ability.

“You don’t have to be great at tennis to play,” said Flynn, who finished third for Farmington in the Class 4A state tournament the past two seasons. “As long as you can use a racquet and a tennis ball, we want you to participate.”