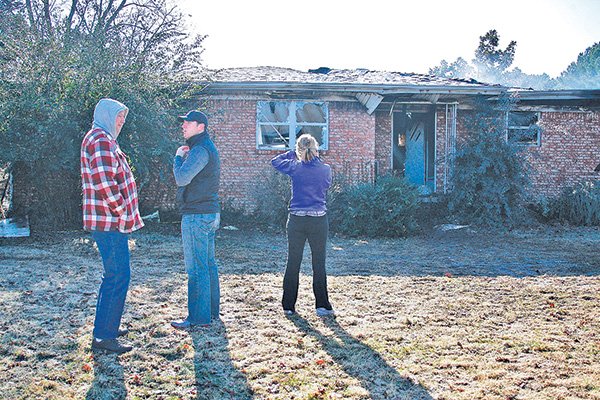 STAFF PHOTO DAN HOLTMEYER Bill Meissinger, left, and other relatives of Paul Pannell survey the damage at Pannell’s house Tuesday after a major fire destroyed everything but the brick walls. Pannell suffered only minor injuries after Meissinger, his son-in-law, smashed a ladder through Pannell’s bedroom window to get him out.

A 92-year-old Washington County man was pulled from his burning home through a bedroom window by his son-in-law shortly before midnight Monday.

Paul Pannell, a World War II veteran born in 1921, was taken to Washington Regional Medical Center for treatment of minor smoke inhalation and injuries suffered when his son-in-law broke a window and pulled him out, said Dennis Ledbetter, Washington County fire marshal.

“Nothing serious, but you know he got cut up a little bit,” Ledbetter said Tuesday.

Bill Meissinger, the son-in-law, lives next door to Pannell on Rom Orchard Road between Fayetteville and Goshen. He said he first thought it was a prank when his neighbors’ frantic knocking woke him. However, there was no mistaking the roar of the fire.

“There were flames on this side of the house that were 40 feet in the air, probably,” he said, pointing to the home’s charred remains Tuesday morning.

The house was a total loss. Everything but the brick shell was destroyed. The yard was soaked through, and every inch of the house coated in ice from firefighters’ efforts.

Meissinger said he grabbed an extension ladder and smashed it through Pannell’s bedroom window. Gray smoke billowed out and he couldn’t see, even with his flashlight. He hollered several times for Pannell but got no response, he said.

Then he said he remembered Pannell fought in the Battle of the Bulge and still dreams of it. Meissinger called out his rank: “Command Sgt. Maj. Pannell!”

“‘What, what’s going on?’” Meissinger said he heard immediately. “I said, ‘You gotta get to this light!’ As soon as I felt his hand the war was on.”

Once he got Pannell out, Pannell seemed somewhat bewildered, and said he was cold, Meissinger said. They waited in Meissinger’s house for the ambulance.

The cold proved a challenge for firefighters, too, Ledbetter said. Firefighters from Goshen responded to the Monday night call. The fire reignited early Tuesday morning, and Fayetteville assisted at that point, said Brad Hardin with the Fayetteville Fire Department. No firefighters were injured.

“It was a tough night, a tough morning,” Ledbetter said.

Ledbetter said the fire’s cause is unknown. Meissinger said he suspected a wood stove, but pointed out the stove was still largely intact.

“We’re going to have to go back out at some point, when things thaw out a little bit,” Ledbetter said.

Meissinger said Pannell was transferred to Mercy Burn Center in Springfield, Mo., because of damage to his throat.

Meissinger said he’d recently buried his stepfather and wasn’t ready to bury another family member. He said the family was considering having a trailer or small mobile home put near the house while it’s rebuilt for Pannell.

Meissinger gave credit to God for the rescue.

“It looks like it’s going to be a happy ending,” he said. “We’re already blessed that he’s still around.”