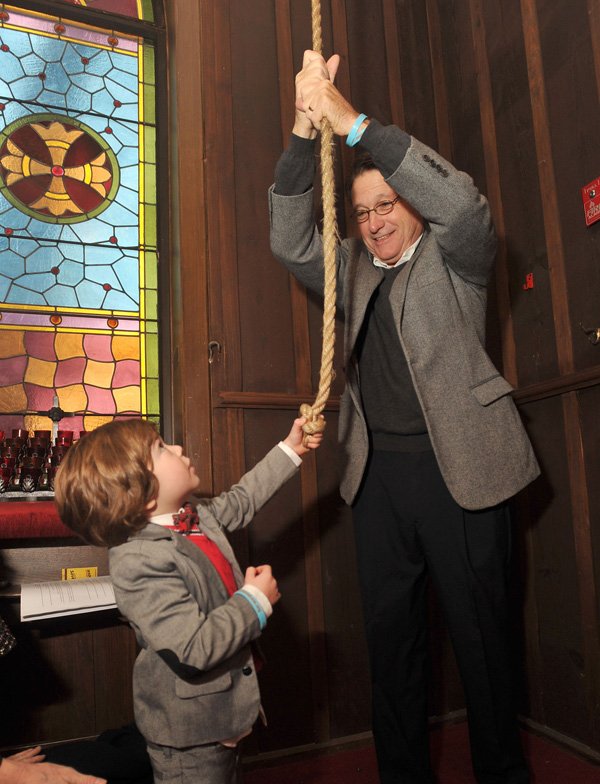 David Lewis, the grandfather of Jesse Lewis, gets a little help from one of his grandsons, Mack Silverman, age 3 from St Loius, as he rings the bells at St. Paul's Episcopal Church in Fayetteville Saturday morning to honor the victims of Sandy Hook Elementary School. Jesse Lewis was one of 20 children and six adults who were shot and killed by a gunman one year ago. Several other churches across the area also rang their bells to honor the victims to the shooting.

FAYETTEVILLE — It’s been decades since David Lewis rang the bells at St. Paul’s Episcopal Church, but Saturday he rang them for a different reason.

Donations to the Jesse Lewis Choose Love Foundation will be spent on developing and providing programs providing children, teachers and adults with the tools they need to have a baseline of optimism for resilience to leave happy and peaceful lives.

The shooter, Adam Lanza, also died after turning the gun on himself.

“There is no reason, no understanding of an event like this but there is a challenge,” Lewis said. “Life does go on and you make the choice of how you want to go on.”

At his grandson’s funeral, Lewis said he learned Jesse acted as a hero by yelling at his classmates to “run” when Lanza stopped to reload his gun.

“About 10 or 11 kids ran out and Jesse stayed with his teacher and died,” he said.

Lewis said his daughter, Scarlett Lewis, found a message Jesse wrote on a chalkboard at home before the shooting.

That message is the title of her book, “Nurturing Healing Love.” The book describes how she felt when she learned about the shooting and how she’s chosen to live her life.

“My daughter has chosen forgiveness and love as the most appropriate way to celebrate Jesse’s short life,” he said. “She has formed the Jesse Lewis Choose Love Foundation whose purpose is to educate young kids all over the world that forgiveness and love are the path to follow for personal peace and joy.”

Proceeds from the book benefit the foundation. Part of its mission, David Lewis said, is to ask people to change one angry thought every day into a compassionate one.

Boss said he and Michele Halsell, director of the university’s Applied Sustainability Center, contacted area churches to take part in the memorial.

“For me personally, Newtown last year was my line in the sand on this,” Boss said. “I was active last year when we were having debates on permitting guns on college campuses. I’m at my threshold point where this nonsense has to stop.”

First Christian Church was one of at least five churches who took part in Saturday’s observance.

“I think it’s important that we, as members of the faith community, stand in solidarity with people who have suffered,” he said. “The ringing of the bells is a subtle way of saying we have not forgotten.”

Saturday’s memorial was among many observances, political and nonpolitical, across the country to mark the one-year anniversary of the shooting.

The national campaign, called No More Silence, was organized by Moms Demand Gun Sense in America, which is a nonpartisan grassroots movement to mobilize mothers and families to advocate for stronger gun laws, according to the group’s website. The weeklong campaign culminated Saturday with events in more than 35 states.

“Since there’s going to be observances nationwide, I thought Fayetteville should have an observance to acknowledge this event,” Boss said. “Especially, since we have a direct connection. This isn’t a rally or a political statement. It’s a simple service to show support for victims of gun violence everywhere.”

Lewis said he was Jesse’s age when he first rang the bells at St. Paul’s Church.

He said he wanted nothing but love to come out of Saturday’s memorial.

“Anger serves no useful purpose and the ability to overcome anger and victimhood could change the world as we know it,” he said.