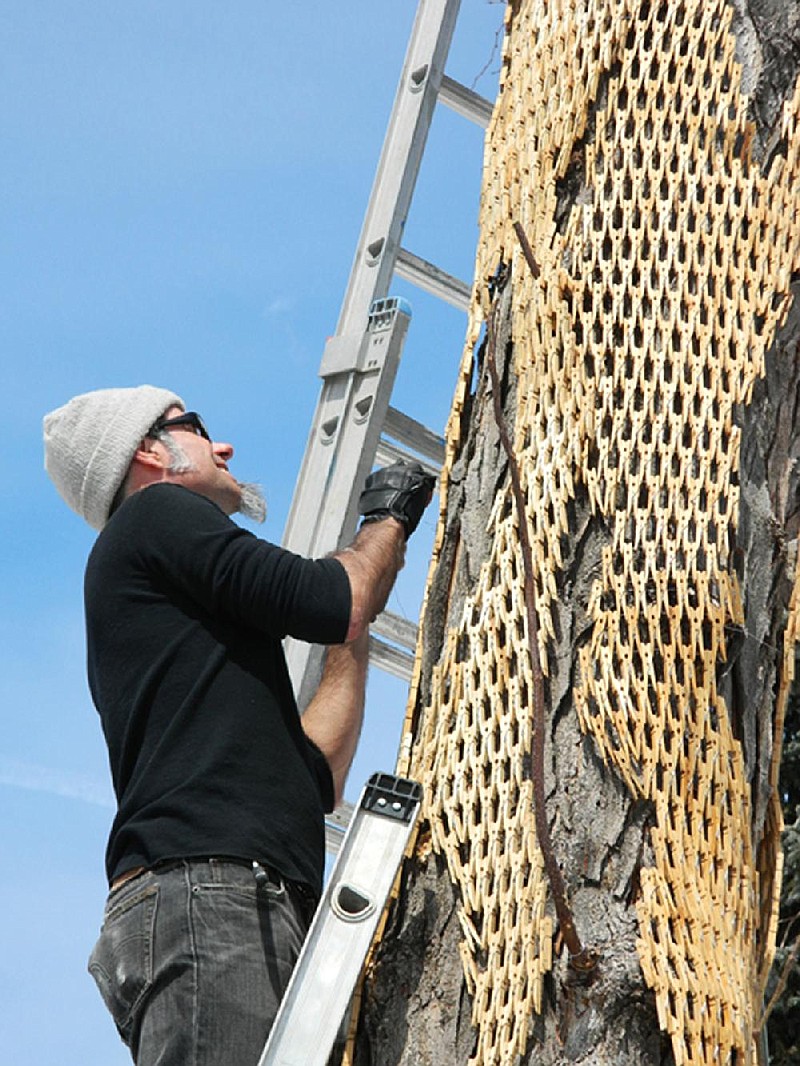 Special to the Democrat-Gazette/GERRY STECCA...Miami-based artist Gerry Stecca attaches clothespins to a tree as part of his Tree Wraps series in this photo taken in Lafayette, Colo. Stecca will install a similar, clothespin piece on the trees around the Fort Smith Regional Art Museum beginning April 18.

The Venezuelan-born artist with an Italian surname makes pliable sheets, or sections, of wood clothespins by hand-drilling tiny holes in the legs, then threading a wire through one clothespin to the next. Stecca will be in Fort Smith April 17 to wrap his clothespin coats around four maple trees that face the new entrance to the Fort Smith Regional Art Museum. The work titled Tree Wrap VI is his largest project to date.

His work with clothespins started as a joke, he said. He made a dress of clothespins for a friend more than a decade ago.

He played with the idea over the next three years, and as he did, his clothespin structures grew larger and more intricate. The growing size of his projects caused him to eventually move from his work from his house to Miami’s Bakehouse Art Complex.

“It’s like the more room I have, the bigger they get,” he said of his works.

As with his most recent project, Tree Wrap V in Lafayette, Colo., he’ll wrap just parts of the tree, creating a look as if the clothespins are a sprawling wooden moss. That installation, completed last month, has a $6,000 price tag.

“When you leave the openings, it looks more natural, you have the contrast so you can actually tell what it is,” he said.

“It’s better defined, you get more out of it and you use about half the clothespins,” Stecca added, laughing.

The Fort Smith Regional Art Museum is paying his transportation and lodging costs, but Stecca said he hopes to raise $1,800 toward the cost of the Fort Smith project through Kickstarter, a funding platform for creative projects.

Stecca and museum executive director Lee Ortega met when she was in her former job as director of marketing and public relations at Bass Museum of Art in Miami. Stecca said his first large scale installation was a free job where he covered a trio of trees in an outdoor bar in Miami Beach. It was an incredible amount of work, but still, he learned something from it, he said. When he began to unwrap the trees, he realized “nothing in nature is that organized, that even.” That’s when he started doing different patterns on the trees.

“I really think people think about works in museums as being oil paintings on the wall, and it’s really much more than that,” Ortega said. “I’m hoping we can broaden the perspective in that regard.”

As Stecca’s luck would have it, wood clothespins were no longer manufactured in the United States when Stecca started using them in his art projects. He now orders them by the thousands from independent dollar-store suppliers. Interns who assist him in his work count the bags and the quantities so he can keep a fairly accurate count onhow many he has used.

“I’m close to the 200,000 mark right now,” he said of the pins. The Fort Smith installation will require between 9,000 and 10,000 clothespins, though Stecca is hesitant to say exactly how many he plans to use, because the museum will allow patrons to guess the number, and $100 in prizes will be awarded to the winner.

A reception for Stecca and display of his work is scheduled April 18 from 5 p.m. to 7 p.m. at the museum. Stecca’s creation is also the museum’s way of celebrating Earth Day the next Monday, Ortega said.