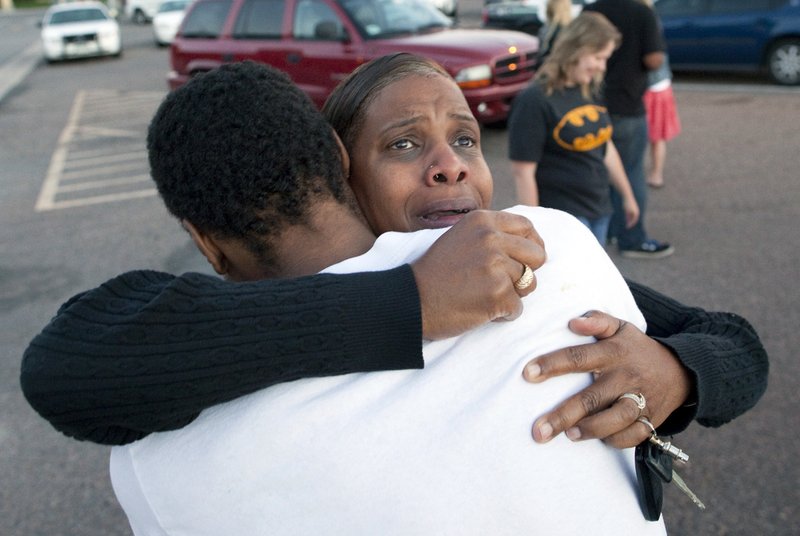 Shamecca Davis hugs her son Isaiah Bow, who was an eye witness to the shooting, outside Gateway High School where witnesses were brought for questioning Friday, July 20, 2012 in Denver. After leaving the theater Bow went back in to find his girlfriend. " I didn't want to leave her in there. But she's ok now," Bow said. A gunman wearing a gas mask set off an unknown gas and fired into a crowded movie theater at a midnight opening of the Batman movie "The Dark Knight Rises," killing at least 12 people and injuring at least 50 others, authorities said.

AURORA, Colo. — Officials announced that a total of 71 people were shot by a gunman in a Friday morning rampage at Colorado movie theater that left 12 dead.

A former medical student in a gas mask barged into a crowded Denver-area theater during a midnight showing of the Batman movie on Friday, hurled a gas canister and then opened fire.

The suspect was taken into custody and identified by federal law enforcement officials as 24-year-old James Holmes. The officials spoke on condition of anonymity to discuss an ongoing investigation.

Oates added that the suspect fired an "unknown amount of rounds" during the massacre. The shooting began in theater no. 9 of the Century 16 Theater. In all, Oates said that Holmes was suspected to use an AR-15 assault rifle, a Remington 870 12-gauge shotgun and 40-caliber handgun. Police apprehended Holmes in the back of the theater.

The first 911 call came in of the shooting reached authorities at 12:36 a.m. Oates said that in all, around 200 police were on scene.

Oates added that Holmes lone brush with the law was a summons for speeding last year.

Authorities did not release a motive. The FBI said there was no indication of ties to any terrorist groups.

When the smoke began to spread, some moviegoers thought it was a stunt that was part of the The Dark Knight Rises, one of the most highly anticipated films of the summer. They saw a silhouette of a person in the haze near the screen, first pointing a gun at the crowd and then shooting.

"There were bullet (casings) just falling on my head. They were burning my forehead," Jennifer Seeger said, adding that the gunman, dressed like a SWAT team member, fired steadily except when he stopped to reload.

"Every few seconds it was just: Boom, boom, boom," she said. "He would reload and shoot and anyone who would try to leave would just get killed."

Holmes had an assault rifle, a shotgun and two pistols, a federal law enforcement official said, speaking on the condition of anonymity to discuss the ongoing investigation.

Some of the deadliest mass shootings globally

FBI agents and police used a hook and ladder fire truck to reach Holmes' apartment in Aurora, Oates said. They put a camera at the end of a 12-foot pole inside the apartment, and discovered that the unit was booby trapped. Authorities evacuated five buildings as they tried to determine how to disarm flammable and explosive material.

Victims were being treated for chemical exposure apparently related to canisters thrown by the gunman. Some of those injured are children, including a 4-month-old baby who was released from the hospital.

Aurora police spokesman Frank Fania on ABC's Good Morning America said he didn't know yet if all the injuries were gunshot wounds. He said some might have been caused by other things such as shrapnel.

Police released a written statement from Holmes' family: "Our hearts go out to those who were involved in this tragedy and to the families and friends of those involved."

The movie opened across the world Friday with midnight showings in the U.S. The shooting prompted officials to cancel the Paris premiere, with workers pulling down the red carpet display at a theater on the famed Champs-Elysees Avenue.

President Barack Obama said he was saddened by the "horrific and tragic shooting," pledging that his administration was "committed to bringing whoever was responsible to justice, ensuring the safety of our people, and caring for those who have been wounded."

It was the worst mass shooting in the U.S. since the Nov. 5, 2009 attack at Fort Hood, Texas, when an Army psychiatrist killed 13 soldiers and civilians and more than two dozen others wounded.

In Colorado, it was the deadliest since the Columbine High School massacre on April 20, 1999, when two students opened fire at the school in the Denver suburb of Littleton, killing 12 classmates and a teacher and wounding 26 others before killing themselves.

Friday's attack began shortly after midnight at the multiplex theater at a mall in Aurora, the state's third-largest city.

The film has several scenes of public mayhem — a hallmark of superhero movies. In one scene, the main villain Bane leads an attack on the stock exchange and, in another, leads a shooting and bombing rampage on a packed football stadium.

It was the final installment of the Dark Knight trilogy directed by Christopher Nolan, starring Christian Bale as Batman. The series has a darker tone than previous Batman incarnations. It is the follow-up to The Dark Knight, which won Heath Ledger a posthumous Oscar for his searing portrayal of The Joker.

The gunman released a gas that smelled like pepper spray from a green canister with a tag on it, Seeger said.

"I thought it was showmanship. I didn't think it was real," she said.

Seeger said she was in the second row, about four feet from the gunman, when he pointed a gun at her face. At first, "I was just a deer in headlights. I didn't know what to do," she said. Then she ducked to the ground as the gunman shot people seated behind her.

She said she began crawling toward an exit when she saw a girl about 14 years old "lying lifeless on the stairs." She saw a man with a bullet wound in his back and tried to check his pulse, but "I had to go. I was going to get shot."

Witness Shayla Roeder said she saw a young teenage girl on the ground bleeding outside the theater. "She just had this horrible look in her eyes .... We made eye contact and I could tell she was not all right," Roeder said.

Police, ambulances and emergency crews swarmed on the scene after frantic calls started flooding the 911 switchboard, officials said. Officers came running in and telling people to leave the theater, Salina Jordan told the Denver Post. She said some police were carrying and dragging bodies.

Hayden Miller told KUSA-TV that he heard several shots. "Like little explosions going on and shortly after that we heard people screaming," he told the station. Hayden said at first he thought it was part of a louder movie next door. But then he saw "people hunched over leaving theater."

Officers later found the gunman near a car behind the theater. Oates said there was no evidence of any other attackers.

Holmes was a student at the University of Colorado School of Medicine in Denver until last month, spokeswoman Jacque Montgomery said. She did not know when he started school or why he withdrew.

At least 24 people were being treated at Denver area hospitals.

"Warner Bros. and the filmmakers are deeply saddened to learn about this shocking incident. We extend our sincere sympathies to the families and loved ones of the victims at this tragic time," the studio said.