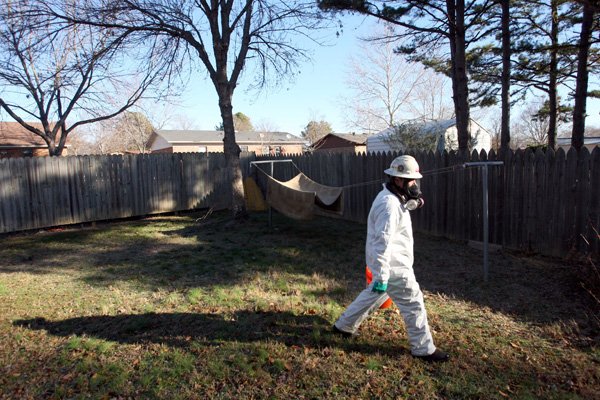 Workers with United States Environmental Services LLC don protective gear as they pick up dead birds in the back yard of a home along Leewood Cove Sunday morning in Beebe. - Photo by Stephen B. Thornton

BEEBE — New Year's revelers in a small Arkansas town were enjoying midnight fireworks when they noticed something other than sparks falling from the sky: thousands of dead blackbirds tumbling out of the darkness to the ground.

The red-winged blackbirds rained onto rooftops and sidewalks and into fields. One struck a woman walking her dog. Another hit a police cruiser.

In Beebe, a community of 5,000 northeast of Little Rock, birds were "littering the streets, the yards, the driveways, everywhere," said Robby King, a county wildlife officer. "It was hard to drive down the street in some places without running over them."

In all, more than 3,000 birds inexplicably dropped dead. Now scientists are investigating whether bad storms, fireworks or poison might have brought the flock down, or if a disoriented bird simply led the group into the ground.

A few stunned birds survived the fall and stumbled around like drunken revelers. There was little light across the countryside, save for the glimmer of fireworks and some lightning on the horizon.

For some people, the scene evoked images of the apocalypse and cut short New Year's celebrations. Many families phoned police instead of popping champagne.

"I think the switchboard lit up pretty good," said Beebe police Capt. Eddie Cullum. "For all the doomsdayers, that was definitely the end of the world."

No one knows for sure why the flock died.

"We have a lot more questions," said Karen Rowe, an ornithologist with the Arkansas Game and Fish Commission. She said there are documented cases of birds becoming confused and plunging to earth.

The director of Cornell University's ornithology lab in Ithaca, N.Y., said the most likely suspect is violent weather. It's probable that thousands of birds were asleep, roosting in a single tree, when a "washing machine-type thunderstorm" sucked them up into the air, disoriented them, and even fatally soaked and chilled them.

"Bad weather can occasionally catch flocks off guard, blow them off a roost, and they get hurled up suddenly into this thundercloud," lab Director John Fitzpatrick said.

Rough weather had hit the state earlier Friday, but the worst of it was already well east of Beebe by the time the birds started falling, said Chris Buonanno, a forecaster with the National Weather Service in North Little Rock.

If weather was the cause, the birds could have died in several ways, Fitzpatrick said. They could easily become disoriented - with no lights to tell them up and down - and smashed into the ground. Or they could have died from exposure.

The birds' feathers keep them at a toasty 103 degrees, but "once that coat gets unnaturally wet, it's only a matter of minutes before they're done for," Fitzpatrick said.

Regardless of how they died, the birds will not be missed. Large blackbird roosts like the one at Beebe can have thousands of birds that leave ankle- to knee-deep piles of droppings in places.

Nearly a decade ago, state wildlife officials fired blanks from shotguns and cannons to move a roost of thousands of blackbirds from Beebe. In recent years, many of the migratory birds returned.

Red-winged blackbirds are the among North America's most abundant birds, with somewhere between 100 million and 200 million nationwide, Fitzpatrick said. Rowe put the number of dead in Beebe at "easily 3,000."

Bird carcasses were shipped to the Arkansas Livestock and Poultry Commission and the National Wildlife Health Center in Madison, Wis. Researchers at the University of Georgia's wildlife disease study group also asked for a set of the dead birds. Test results could be back in a week.

Rowe said many of the birds suffered injuries from striking the ground, but it was not clear whether they were alive when they hit. A few grackles and a couple of starlings were also among the dead. Those species roost with blackbirds, particularly in winter.

Tens of thousands of blackbirds can roost in a single tree. And they do not see well at night, when they usually sleep, Fitzpatrick said.

Earlier Friday, a tornado killed three people in Cincinnati, Ark., about 150 miles away. Then, a couple hours before the birds died, thunderstorms also passed through parts of central Arkansas.

Lightning could have killed the birds directly or startled them to the point that they became confused. Hail also has been known to knock birds from the sky.

In 2001, lightning killed about 20 mallards at Hot Springs, and a flock of dead pelicans was found in the woods about 10 years ago, Rowe said. Lab tests showed that they, too, had been hit by lighting.

Back in 1973, hail knocked birds from the sky at Stuttgart, Ark., on the day before hunting season. Some of the birds were caught in a violent storm's updrafts and became encased in ice before falling from the sky.

Rowe and Fitzpatrick said poisoning was possible but unlikely. Rowe said birds of prey and other animals, including dogs and cats, ate several of the dead birds and suffered no ill effects.

"Every dog and cat in the neighborhood that night was able to get a fresh snack that night," Rowe said.

The birds were the second mass wildlife death in Arkansas in recent days.

Last week, several thousand dead drum fish washed up along a 20-mile stretch of the Arkansas River, about 100 miles west of Beebe. Wildlife officials say the fish deaths are not related to the dead birds, and that because only one species of fish was affected, it is likely they were stricken by an illness.