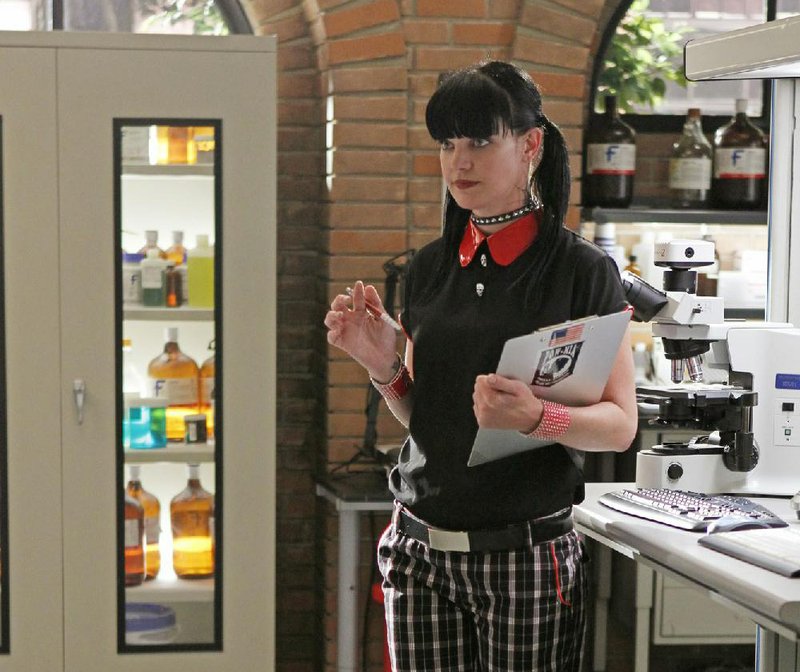 Pauley Perrette, whose past jobs have included bartending and cooking on a Manhattan tour boat, has found a home playing the smart and sassy forensic scientist Abby Sciuto on the CBS crime drama NCIS.

On the job in her high-tech lair, Abby is an information magnet and a bloodhound for clues to help crack the latest case with a link to the Navy or Marine Corps. And in the process, she’s brainy, beautiful, charmingly quirky and totally gung-ho — which is to say, a lot like Pauley Perrette.

In its ninth season, NCIS remains a smash hit, averaging 20 million viewers a week. And even among its crazy-popular ensemble (including Mark Harmon, Michael Weatherly, Cote de Pablo, Sean Murray, David McCallum and Rocky Carroll), Perrette is a standout, having landed at the top of a recent Q Score roster measuring TV stars’ fame and likability among viewers.

But in person, as herself, Perrette can even upstage her performance as Abby. Hear her jazzed accounts of a life that led from her Atlanta upbringing to a role on one of TV’s hottest shows:

She describes her earlyon aspirations: “to work with animals, be in a rock ’n’ roll band or be an FBI agent.”

She recounts her scramble in New York, where she moved to study at John Jay School of Criminal Science but worked several jobs at once to make ends meet: “Not only was I bartending in the club-kids scene, with a bra and combat boots and a white Mohawk, but I wore a sandwich board on roller skates passing out fliers for Taco Bell in the Diamond District, and I worked on one of these boats that go around Manhattan — way down in the galley, knee-deep in fish water, cooking food for the rich people upstairs.”

She thinks back on the days of her hard partying and substance abuse: “I’ve done everything. Everything! I can’t believe I survived it.”

And she reports how, along the way, the bartender broke into show biz: “A kid in coat-check told me, ‘I know this director who would really like you.’ I started booking commercials like craaazy.”

Then she moved to Los Angeles, landing roles in shows such as Murder One, Frasier, Time of Your Life and JAG, where a guest shot led to NCIS with its premiere in 2003.

Perrette is an unapologetic cheerleader for her show — and her character.

“I’m the biggest Abby Sciuto fan on planet Earth,” she announces. “I mean, I didn’t invent her. I just have the honor of playing her. She fascinates me.”

For a recent interview, Perrette looks a decade younger than her 42 years, dressed in jeans and a green T-shirt that echoes her luminous green eyes. Her raven hair (dyed for the role of Abby from her natural blond) is in pigtails. If she looks short at 5 feet 10 inches, it’s because she isn’t wearing Abby’s towering platforms, but instead tennis shoes. She flaunts a radiant smile and a flurry of hands when she speaks — say, about the joys of acting.

“There’s no drug that I ever did that worked as well as being an actor,” she declares. “What you’re looking for with substance abuse is escape. But with acting, you can escape into 1,000 different things without almost killing yourself doing it. Acting is a total drug!”

Meanwhile, she found her lifelong interest in crime a big help in her newfound acting pursuit — and not just for playing a crime-buster such as Abby.

That said, a question naturally arises: What drew Perrette to criminal science in the first place?

“I feel like life on planet Earth is incredibly hard,” she begins. “There are things we just can’t stop: floods and fires and earthquakes and tsunamis — crushing events for people to deal with. But I don’t understand someone making the world more difficult on purpose, to harm people with no empathy whatsoever, saying, ‘I’m going to make things even worse. Watch me!’ That’s the motivation for me wanting to be a crime fighter.”

As Abby, she is. But when her fantasy life ends and reality resumes, Perrette slips into a different kind of role to make things a little better — that of do-gooder for a variety of causes.

“I’m very reclusive and love being alone, so fame is incredibly jarring for me. But it gives me a huge platform for the same things I was saying about giving back and volunteering when I was a bartender. And that makes me very happy.”

She’s also happy writing poetry, and performing rock music in a number of bands, and dreaming of future acting roles (“bring ’em on!”) beyond Abby.

“I wear a lot of hats,” says Perrette, heartily attempting to sum herself up. “I have a large hat rack.”