300-plus jobs await when plant is built 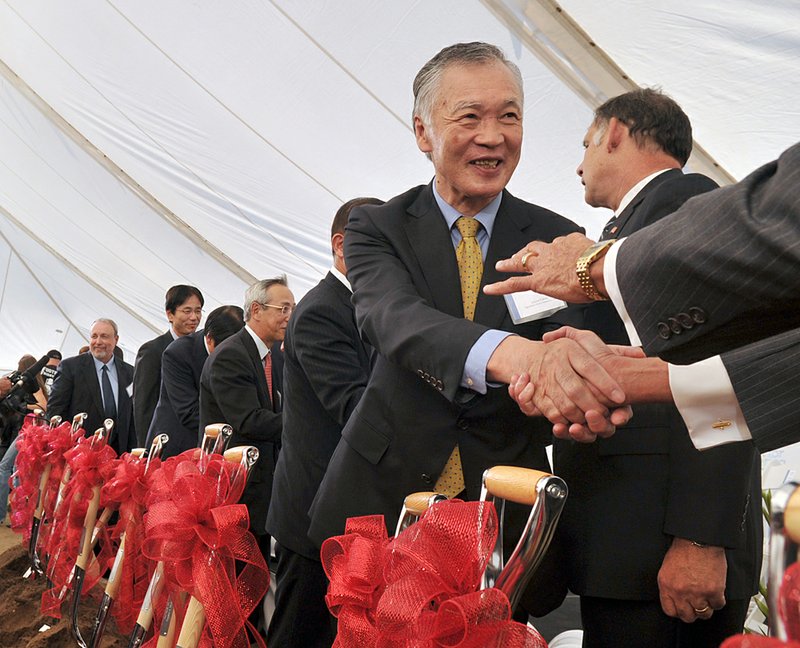 FORT SMITH — Mitsubishi Power Systems Americas Inc. on Thursday broke ground on its first U.S. wind-turbine manufacturing operation. The plant is expected to open in 2012 with as many as 330 employees.

“Welcome to a new chapter in energy creation in the United States,” said Ichiro Fukue, vice president of Mitsubishi Heavy Industries Ltd., at the groundbreaking event attended by Gov. MikeBeebe, along with state and congressional representatives.

The $100 million Mitsubishi assembly plant adds to the growing number of manufacturers in the state that provide vital equipment for neighboring states with mounting wind-energy industries, like Texas and Oklahoma.

A crowd of 200 gathered at the 90-acre parcel at Chaffee Crossing Industrial Park for the ceremony.

“The Mitsubishi project, I think, is a significant project for the state of Arkansas, but particularly for Fort Smith,” said Kermit Kuehn, director of the Center for Business Research and Economic Development at the University of Arkansas at Fort Smith. “Besides boosting some of the manufacturing jobs lost ... it has brought a psychological boost with that kind of international brand.” 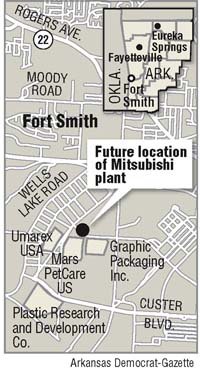 Fort Smith already is home to manufacturers such as Whirlpool Corp., Trane Inc. and Rheem.

The Fort Smith metropolitan statistical area, from which Mitsubishi will be hiring, had a not-seasonally-adjusted unemployment rate of 7.9 percent in August. By comparison, the statewide unemployment rate stood at 7.7 percent.

Mitsubishi workers will assemble wind-turbine enclosures, or nacelles, for the U.S. market at the 200,000-square-foot facility. Officials have said jobs should pay $12-$15 an hour.

Turbine component parts maker Beckmann-Volmer, also of Germany, said in May it will build a facility in northeast Arkansas to support Nordex’s facility.

The state is in a good position to attract wind-related businesses, since manufacturers prefer to locally source materials and parts, said Randy Fox, vice president of the Americas for LM Wind Power in Little Rock, during a recent interview.

Denmark-based LM Wind operates a blade factory in Little Rock and is the largest supplier of wind blades in North America, serving both Nordex and Mitsubishi.

Future demand for wind turbines, however, must be helped by the passage of a national renewable-energy standard - a mandate that a certain percentage of power come from renewable sources, said Fox.

“Our work [at the Little Rock plant] has been fairly flat year-over-year, and the industry as a whole is down in 2010 as compared to last year,” hesaid, confident that there will be work in 2011.

Sonia Williams, a Floridabased spokesman for Mitsubishi, said her company is bullish about the future of wind energy.

“We see the economy for alternative energy increasing and improving, and that it will continue to do that in the future,” Williams said after the groundbreaking.

“It’s our location and our infrastructure,” he said, mentioning highways, railways and access to international ports through the McClellan-Kerr Arkansas River Navigation System.

The Mitsubishi deal will receive at least four state economic incentives, including $3.75 million from the governor’s Quick Action Closing Fund that will be designated for site preparation and infrastructure costs. Other assistance will come in the form of state income tax abatement awards, job creation rebates, and refunds from sales and use taxes.

Additionally, Fort Smith will contribute about $6 million in direct incentives, the largest portion being construction of a new road to the plant.

Industrial revenue bonds worth up to $75 million also will be sold by the city to reduce Mitsubishi’s property tax burden. In standard industrial bond deals, a company will lease its facility from the city, making it exempt from most property taxes.

With major wind companies establishing themselves in the state, “We’re certainly becoming a name in this business,” Holmes said, adding that Polymarin Composites, a Danish blade manufacturer, had been removed from thecommission’s recruiting list.

Mitsubishi Power Systems has more than 3,000 wind turbines in the United States, and its customers have projects in Texas, Colorado and New Mexico, according to a 2007 news release.

Mitsubishi claims about 7 percent of the U.S. market and has said its presence in the country has been threatened by General Electric Co., which occupies about 70 percent of the wind-turbine market.

A continuing legal skirmish between the two companies took a turn in June when GE sought to dismiss an antitrust lawsuit filed in May by Mitsubishi Heavy Industries Ltd. The suit contends GE is monopolizing turbine sales through baseless, patent-infringement claims.

Antitrust refers to action taken to prevent the formation of monopolies.

Williams said the Arkansas antitrust suit had been stayed, pending the outcome of a suit filed in Texas.

Fairfield, Conn.-based GE accuses Mitsubishi of infringing on wind-turbine patents since 2008 in complaints filed with the U.S. International Trade Commission and U.S. district courts in Texas.

Mitsubishi said the issue with GE will not affect its plans for the Fort Smith plant.

And the Mitsubishi jobs will be related to a sector that represents growth potential, said Kuehn of UA-Fort Smith.

“The more exciting thing is the introduction of alternative energy into the community in a kind of flashy way with Mitsubishi,” Kuehn said. And it’s “a good pathway to pursue in attracting other companies.” To contact this reporter:

Print Headline: 300-plus jobs await when plant is built